Your ABC. Liars or Fools?


UPDATED
Some bars have the TV. All channels, of course, as a chap has to carefully sift the fiction from the truth. And of course Pay for them. The Taxpayer has his stores invaded by the Taxman's shovels in order to pay the people in the 'National Broadcaster', in the vain hope that they may tell us useful things.

But as with its sister in the UK, the BBC, our ABC is replete with sins of commission and omission. It tries to tell us that we commit sins of Emission.

(Update at the bottom: Just see how an interviewer SHOULD go after liars and ommitters, dissemblers and mendacity-merchants).

Jo Nova was in and up in arms with indignation. Jo is good at keeping a firm rein on it though. You can get to her various wonderful exposes in the right side-bar.

"There they go again. Last night the ABC again used taxpayer dollars to post up a slick advertisement for their favourite religion.

Because Catalyst won’t read skeptical blogs, interview skeptics, or ask difficult questions, they give a false impression to any poor viewers who haven’t figured out that the presenters (in this case, Anja Taylor) are more activist than investigator.

It’s not so much what Catalyst say, as what they won’t mention. So the water cycle is intensifying — double the climate models? But Catalyst won’t tell you that the temperature trend is half what the models predicted (and below their lowest estimate).

They won’t tell you that the water vapor trends in the upper troposphere are crucial to the models but completely wrong.

They mention the ARGO buoys and then ignore their most important result — that any warming so far is well below what the models estimate (inasmuch as we can tell).

They mention the Arctic, but not the Antarctic. (Wasn’t this supposed to be global warming?)

Without a cause-and-effect link this isn’t science, it isn’t journalism, and we don’t need more

Catalyst for regulation of energy use and bigger government perhaps?


Another fellow, Ken, a friend of Jo, perhaps, chimed in:

Last night’s Catalyst was all about extreme weather, complete with scary images and scarier narration.

For now I will leave the claims about more frequent high intensity rain events (I think they might find Toowoomba got a bit more than 100mm in an hour, and they mixed up footage of Toowoomba with the Lockyer Valley), January being our hottest month, the Pacific getting fresher and the Atlantic saltier.

I’ll just look at the claim that blizzards and heatwaves can both result from global warming.

Professor Jennifer Francis , from the Institute of Marine and Coastal Sciences, Rutgers University, explained that the rapidly warming Arctic has created a ‘gentler’ atmospheric temperature gradient between the Tropics and the Poles.  This leads to weaker, more variable, jet stream winds, which then ‘meander’ north and south more.   This allows frigid polar air to penetrate further towards the tropics, and hot tropical air to penetrate further towards the poles.  Also, because the wavy jet stream is moving more slowly, this causes weather systems to persist for longer.

OK, that is a plausible explanation for the extremes being experienced in Europe.  But did your intrepid investigative science reporter Anja Taylor or researcher Wendy Zukerman then ask the good professor,

“So is that happening in the Southern Hemisphere too? You know, with the Angry Summer?”

Who knows if they did.  (Taverner: They didn't show either the ask or the reply, if indeed the ask existed). But the answer is “no”. For while it is true that “The Arctic is warming faster than anywhere on Earth”, the Antarctic isn’t.

But omission is just one crime against Intellectual Honesty. How about deliberate deception?

Peter Gleick — infamous for using deception to steal documents “for The Cause” tweeted that it was getting hotter every year. He attached a picture of melting traffic lights. 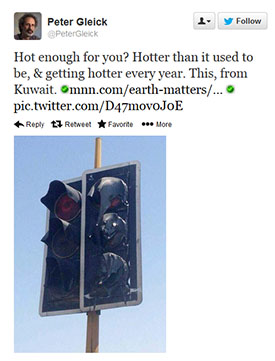 “Hot enough for you?”

How good is this man’s physics?

Just one half melting??

What he didn't show was this.

I wonder if he had anything to do with setting the fire.  Just asking.

There are others though that take a fairly strict look at 'data' and 'reports' to try and get to the truth.

1. It should never have been done, it’s an unscientific method — “consensus”

2. The “consensus” was defined in three different ways. (Which hypothesis are they testing?) None of the three definitions is specific enough to be falsifiable.

3. The paper strangely omitted the key results. (Why make 7 classifications, if they were not going to disclose how many papers fell into each category?)

4. Of nearly 12,000 abstracts analyzed, there were only 64 papers in category 1 (which explicitly endorsed man-made global warming). Of those only 41 (0.3%) actually endorsed the quantitative hypothesis as defined by Cook in the introduction. A third of the 64 papers did not belong.

5. None of the categories endorsed “catastrophic” warming — a warming severe enough to warrant action — though this was assumed in the introduction, discussion and publicity material.

6. The consensus (such as there is, and it being irrelevant) appears to be declining.

The nice thing about this commentary is that Monckton provides a summary of the philosophy of science (showing Cook et al are 2,300 years out of date). Monckton has also checked Cook’s own data which was finally provided (several weeks after publication) and compares Cook to Oreskes, Anderegg, and Doran and Zimmerman and explains why they are wrong too.

Jo attached the entire Monkton paper if you have the interest enough in the truth to go and look.

And another thing ! We mentioned the BBC. And it is not just Global Warming that is a religious fetish. There's the 'Animal Rights mob too: a sort of greenie sub-species.

James Delingpole popped in and spoke up abou a recent radio program he was on. BBC of course.

I did very much enjoy recording Any Questions in the belly of the beast – aka Eco Loon Central, aka the Centre for Alternative Technology in Machynlleth – this week. But I'm not sure it necessarily had the makings of brilliant radio.

The big problem with radio – as opposed to TV – is that if things start kicking off in the recording venue (as they very much did with last night's unusually lively audience of yoghurt-weaving yurt-dwellers) there are no cameras to relay what's going on to the outside world. If you were listening last night – or if you listened to today's repeat – all you'll have heard is some background protestations from the audience and the sound of Jonathan Dimbleby trying to keep order.

I think the technical term for what the BBC did with this programme was "trolling."

Step one: arrange to record your panel show in ground zero of green lunacy.

That noise you'll have heard in the background was partly all the mung-bean-munchers in the audience jeering and hissing me when I expressed scepticism about climate change; but mainly – the real rumpus at the end – was when a small group of anti-badger-cull protestors in the front row tried to hijack the show by loudly shouting insults at Owen Paterson.


Annoyingly this was at the very moment when it was my turn to speak about wind farms and I ended up having to shout into my mic so as to avoid being drowned out by the yelling badger huggers.

Anyway, I enjoyed it a lot, as I think Paterson did too.


Drinks for Jo and Ken and James too. Repentance and restitution needed from Gleick, a very naughty man.

The ABC can be shut down. The BBC too.

They are only kept in business because they screen Dr Who, and the buggers won't even tell us what his name is.

This wonderful exchange just in. A 'Spy' Agency on a Uni Campus get's hauled over red-hot coals by a student. Oh how I wish the ABC and BBC has such terriers. It encourages an old Knight to know that all is not lost with the upcoming generation.