The Village Idiot is No More.


The Tavern was in uproar with laughter today. People rolling on the floor holding their sides in. Not that we usually laugh at the village idiots, but Chloe Jennings-White seemed so typical of today's  peculiar set of malaises.

Anyway. It started with a chap reading out a news report from the paper.

A WOMAN is so desperate to be disabled she is willing to undergo a $25,000 operation so she can live the rest of her life permanently in a wheelchair. 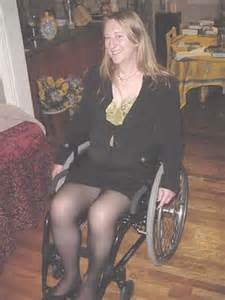 London-born Chloe Jennings-White uses a wheelchair and lives as if she is a paraplegic despite being completely able-bodied and a passionate skier.

Yes, these days you can do anything you want !! You are a Woman! You can ski, get a Boardroom Job by decree, live off a taxpayer or twenty, BE whoever you want!! Yeah.

The 58-year-old, who now lives in the US with her wife Danielle, said she had wanted to be disabled for as long as she could remember.


This is where the real roaring laughter started.


The condition' was upgraded recently in the DSM.
It used to be called 'Village Idiot' 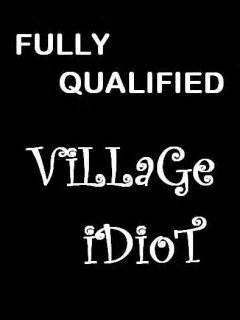 The rare psychological condition makes sufferers feel they want to be disabled.

Ms Jennings-White told The Sun the only thing stopping her from getting the surgery, which would leave her permanently disabled, was a lack of money.

Cries of, "Taxpayer, taxpayer, where are you?" rang out from the Pin and Balloon drinkers.

There must be food-stamps at least for her. It is Obama's America, after all.
Of course there is always VAWA for a Grant. 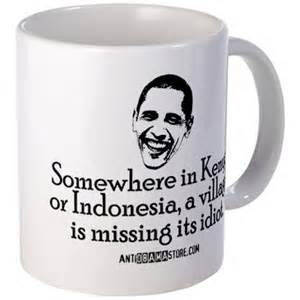 She said she had even tried to have accidents so she could lose the use of her legs and that her surgery dream would be "the happiest day of my life".

Remember the days when a small child, even an idiot child, could be made happy with an ice-cream?


Ms Jennings-White even found a doctor overseas who was willing to cut her sciatic and femoral nerves.

One guy shouted "I have a doctor like that. Anything for a medicare buck."


She said: "I'll never be able to afford it, but I know I won't regret it if I ever can, and I don't know why it upsets people.

"It's the same as a transsexual man having his penis cut off. It's never coming back, but they know it's what they want."

She admitted she always wondered why she was born needing legs and the first time she sat in a wheelchair, which she had ordered off the internet, felt right.

You can tell what goes on in this woman's head. The Feminist Mantra - whoops, womantra - "if it feeeeels good, it IS good"


As a child and teenager she didn't tell anyone about her feelings but would bandage her legs up at home when she was alone so she could pretend she was disabled.

Ms Jenning's wife Danielle had no idea when they met in 2006 but Ms Jennings-White soon confessed after a back injury gave her the perfect excuse to wear leg braces. 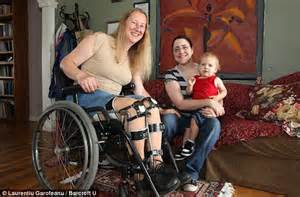 Gasps of mock Shock and Horror. A woman cons a woman! Where will it all end ?  Rampant mock-misogyny was cornered amid all the howls of laughter and put in a cage for later display

It was during the search online for leg braces that she read about BIID for the first time and was relieved there were hundreds of others like her.

Despite Danielle doing all the housework and gardens, Ms Jennings-White said her wife was understanding.


"I told her it had been going on my whole life, and I couldn't stop. She was shocked but vowed to stand by me when I told her it was the only way I could be happy," she said.

The paper didn't actually ask Danielle
who was up on the roof
cleaning the gutters at the time.

It is good that this lunatic woman is not in Oz. The Government here is boasting about spending BILLIONS of taxpayers' bucks on the disabled. (Don't worry, it is only a Labour 'Promise'). These include perfectly fit people who are work-shy. They can play football and go clubbing, even skiing, but ask them to do some work for a living like the rest of us and they fall back on their medicare-funded crutches in a faint.

We won't let'em in the door here, but fortunately they have special Government-run Pubs. 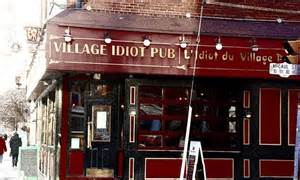 I served a lot of beer when the laughing died down.

I reminded them of another young woman, Janine Shepherd, who was an Olympic level Oz skier. She had an accident which made her paraplegic. But she fought for her legs and worked hard to walk unaided again. 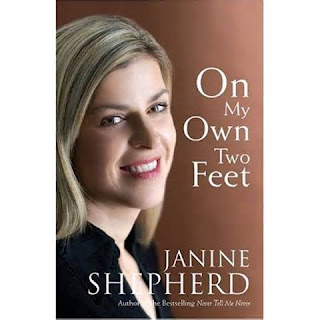 Despite not having any feeling in her feet, which stopped her getting back to world-class skiing, she continues to ski AND she took to flying, becoming an aerobatic pilot. 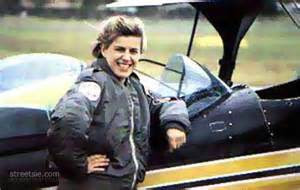 There ARE spunky women around.

Fine women who try hard and DO the hard yards, not 'feel' they want to be disabled when they are not.

Then we started musing about that poor child, being raised in Hilary Clinton's Village, saddled with two awful, stupid Village Idiots.