Updated. Ramz takes a look, below.

No-one in the Tavern describes themselves in terms of their sex. No-one comes in and announces, "I am a heterosexual" and expects everyone to praise him and buy him a pint by way of introduction. Not yet, anyway. But we do get Boy Scouts in here sometimes. 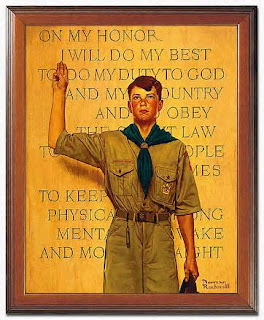 They are quite pleased to Identify themselves as Scouts, just as the local bricklayer is happy to be called a 'Brickie'. The occasional Bikie group comes through and none of them ever says "I am a proud heterosexual". Mostly they just grunt. Not gay at all. Nor do the Lawyers (yes we had two in last week) nor the Vineyard lady down the road, and I know she is because she has kiddies, a happy marriage and her wine does not curdle.

But Homosexuals.... that is the first thing they insist on you knowing. They define themselves by their perversion and we are expected to cheer.  Indeed, we are increasing obliged by law to cheer, support, praise and pay.

Homosexuals are the first to  define their identity based upon carnal appetites - for other males. But they will not be the last.

And they have a particular liking for boys and boy scouts. so much so that they have managed to pervert the idea of scouting and insist on being 'included'.

Recently, millions of Americans were shocked and saddened when the Boy Scouts of America (BSA) disgracefully bowed to left-wing political pressure and became something it had never before been: a hyper-politicized, aberrantly sexualized petri dish for social and sexual experimentation.

Created in 1910 to “prepare young people to make ethical and moral choices over their lifetimes,” the BSA, on May 23, 2013, inexplicably voted to welcome into its ranks “open and avowed” homosexuality (boy-on-boy sexual attraction and behavior), thereby disavowing the “morally straight” Scout Oath its members have been sworn to uphold for over a century. 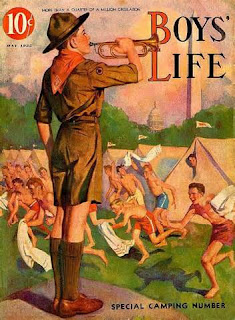 Even worse, and in so doing, the BSA effectively waived the only legal defence it once had to preclude openly homosexual Scout leaders and gender-confused girls from its ranks: That defence? - religious and moral conviction.

It’s only a matter of time until the BSA is forced to capitulate to sexual extremists’ political demands and...

allow adult males who define their identity based upon carnal appetites for other males to take your boys on overnight camping trips. 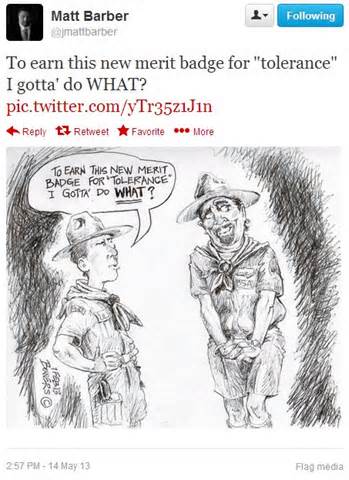 This is particularly disquieting when you consider that homosexual assaults against boys occur at an alarmingly disproportionate rate when compared to heterosexual assaults.

Of course, not every “gay” man – self-identified or otherwise – is a paedophile, but, and despite baseless claims to the contrary, many studies indicate that a disturbing percentage of same-sex-attracted men are.

Consider, for instance, a study published in the Archives of Sexual Behavior, of over 200 convicted paedophiles and pederasts. It found that

“86 percent of offenders against males described themselves as homosexual or bisexual.”

This demonstrates, as notes Peter Sprigg of the Family Research Council, that ...

Here’s the good news: As the BSA leadership of fools rapidly sinks, those who desire a safe, non-sexualized alternative to the Boy Scouts now have a life raft. On Saturday, June 29, I, along with nearly 50 top Christian, youth and scouting leaders from across the nation, took part in a private, landmark meeting in Louisville, Ky.

The meeting was convened to lay the groundwork for a principled, values-based scout-like youth character development program for young men. Although some finishing touches remain (such as the organization’s official name), a press conference was recently held in Washington, D.C., to announce the launch of this exciting new organization.


“Our vision is to be the premier national character development organization for young men which produces Godly and responsible husbands, fathers, and citizens,” notes the news release.

“The new program will be an exciting and motivating outdoor-based program focused on leadership and character development for boys and founded on principles and values that reflect a Christian worldview. 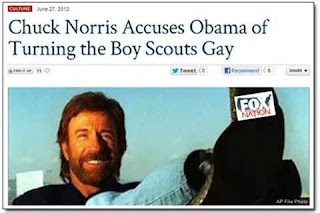 “It will be open to all boys irrespective of race, religion, ethnicity, or national origin,” continues the release. “Parents from all faiths are welcome to place their children in the program.

While boys may come from every religious background, adult leaders in the program – from the National Board level to individual unit volunteers – will adhere to a standard statement of Christian faith and values.


The Boy Scout Association is a lost cause.

The Barrel of Apples is irretrievably rotten. Once the rot is introduced it could have been found and thrown out to save the barrel; but instead the Government forced more in. Homosexuals have 'Rights'

But it could become even worse.

They claim it is unfair to be stigmatized for sexual orientation.

Using the same tactics used by “gay” rights activists, pedophiles have begun to seek similar status arguing their desire for children is a sexual orientation no different than heterosexual or homosexuals.

Critics of the homosexual lifestyle have long claimed that once it became acceptable to identify homosexuality as simply an “alternative lifestyle” or sexual orientation, logically nothing would be off limits.

“Gay” advocates have taken offense at such a position insisting this would never happen. However, psychiatrists are now beginning to advocate redefining paedophilia in the same way homosexuality was redefined several years ago.

In 1973 the American Psychiatric Association declassified homosexuality from its list of mental disorders. A group of psychiatrists with B4U-Act recently held a symposium proposing a new definition of pedophilia in the Diagnostic and Statistical Manual of Mental Health Disorders of the APA.


B4U-Act  calls paedophiles “minor-attracted people.” The organization’s website states its purpose is to, “help mental health professionals learn more about attraction to minors and to consider the effects of stereotyping, stigma and fear.”

Paedophilia has already been granted protected status by the Federal Government.

The Matthew Shephard and James Byrd, Jr. Hate Crimes Prevention Act lists “sexual orientation” as a protected class; however, it does not define the term

Meanwhile, for those not in the boy scouts, other groups are springing up to 'help' boys 'express' themselves. Very young boys.

A Boys' Camp to Redefine Gender

Over the past three years, photographer Lindsay Morris has been documenting a four-day camp for gender nonconforming boys and their parents.

The camp, “You Are You” (the name has been changed to protect the privacy of the children and is also the name of Morris’ series), is for “Parents who don’t have a gender-confirming 3-year-old who wants to wear high heels and prefers to go down the pink aisle in K-Mart and not that nasty dark boys’ aisle,” Morris said with a laugh.

Hello. Do we hear a hint of MISANDRY?


It is also a place for both parents and children to feel protected in an environment that encourages free expression.

“[The kids] don’t have to look over their shoulders, and they can let down their guard. Those are four days when none of that matters, and they are surrounded by family members who support them,” Morris said.


So, at 3 years old a little boy who wants to 'freely express' himself by wearing his sister's clothes will get a supportive environment. And an encouraging  pat on his bottom. Maybe a caress. I wonder what he will get if he expresses himself by shitting on the carpet in the club room. A smack? Possibly. Expression can be taken too far.

What if he wants to dress up as Superman?

This is a giggling lunatic deliberately manipulating toddlers; perverting their normal development.

RamzPaul took a look at the boy's camp and told us about it. He was quite excited ! Hahahaha.

Bar customers need to stand up, down their pints, slug down a glass or two of Courage and get to work.