How to - Be naked in Public

No, the Tavern does not usually host parties of naked people, although it is a Free House and all are welcome. But nakedness has been in the news lately. Some bare bums are applauded and some hauled into court.

This is generally what one expects to see. The not as ubiquitous as you imagine 'dirty old man'. 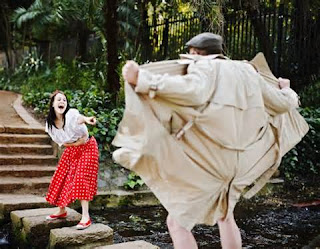 So how do you make sure you do it 'right'?

Well, for a start it helps to be female.

Most public displays of nudity are by youngish women, although the older and less svelte women often join in too. Some are quite brazen about it and some are very demanding of attention. At the sound of a camera clicking, no matter where, many a full set of female clothing can suddenly drop to the floor.

Better even barely clothed, is my opinion, no matter how svelte one is.

At least the Feminists get away with it although to be fair to these 'orrible women they usually wear something. Their language tends to be as colourful but not as pretty/revealing as what they strut about in. And the language they use is often foul. They demand to do whatever they want and no-one tries to haul their botties to court. Feminists get away with the most outrageous behaviour. 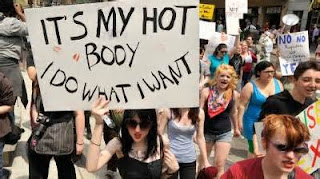 ﻿But the naked male body is not something one wants the children 'exposed' to. Is it. Not MALE !!! (tm) bodies. I mean, it ain't natural, innit? Deviant !! The cops are called. Old ladies would faint; younger ones scream; dogs would howl and little girls need counselling for the next 35 years (at taxpayer expense).The law actually forbids it, as people would be traumatised.
But .....perhaps things are looking up.
As long as it is FOR the children. Just.

However, all such deviant thoughts were banished for the day; the police looked on smiling and cleared a path for hundreds of naked men displayed their matrimonial assets for the sake of the children. There was, said the Independent, a ‘strong environmental message’ in their behaviour.


They were exposing themselves ’in protest against car culture, climate change and our dependency on oil’.


Ah well, of course.  The Environment. Trees. But no 'woodies' allowed.

Not that a naked men event protesting the wicked treatment men and Fathers get in the Family Court would ever be helped along. They get jailed or barred from their children even fully dressed. 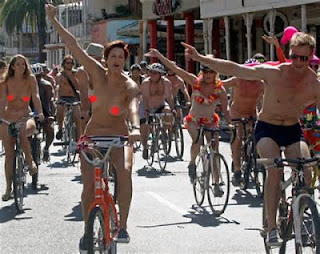 That’s OK then, a naked penis that raises (but not erects) its head in support of climate change couldn’t possibly alarm and distress the children. Around 100 of the participants were such committed cyclists that they had to borrow a ‘Boris’ bike for the day….


Lanes were restricted on Marble Arch and Park Lane “due to large numbers of spectators observing the start of the World Naked Bike Ride event”. 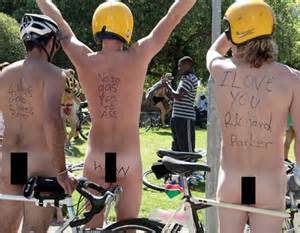 Elsewhere in the British Isles, another ‘strong environmental message’ was being contemplated – regrettably, this message was displayed on two legs.  If only he had rolled out his message on wheels!


Stephen Gough was being invited to add to his collection of 53 convictions for appearing ‘naked in public’ with another for failing to observe the Asbo he was issued with last time he left court – in the same state in which he arrived – naked. So far he has been jailed for a total of 6 years, add another 11 months to that now. 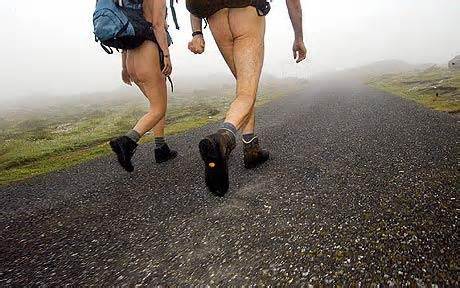 Last time Stephen appeared in court in Scotland, the former Royal Marine arrived at Kirkcaldy Sheriff Court in Fife in his own security van amid tight security with great care being taken to shield him from curious locals. He was accused, not of blatantly displaying himself in the middle of central London in front of the children, but of quietly walking ‘in the vicinity  of a children’s park. There was no suggestion that any children had actually seen him!

I suppose now we will be getting the local Naturalists dropping by.

We will have to keep some seats warm for them.