By the Lord Harry we can laugh in the Tavern. You have to sometimes, seeing the antics in the village, especially amongst the women, bless 'em. We like women here and hang on their every word.

In the Oz villages the left are licking their wounds after a complete drubbing in the Polls and their chosen leaders thrown out into the deserts. But the shrill cries of the lefty ladies echoes down the by-ways still.

It seems all their moans and shrieks are centred on the poor showing of women in the new Government. They are almost orgasming over it. Here we are in an old, established democracy in which women are more than equal, and yet few women were elected. As a result the 'Arch-Misogynist', Tony the Jesuit, has had to form a Cabinet with barely a well-turned ankle in sight.

Of course if there were a whole lot of women in the new Government front benches, the lefty ladies would be calling them traitors to the sisterhood.

Not that women were missing from action in the 'shadow' line up that Abbott had when in opposition.

His Chief of Staff  - a very capable woman -  Peta Credlin - saw to that.

She is still in place but only because she is not a politician who had to find a seat and a willing bunch of people to vote for her. But it was she who made damned sure that the entire team worked like a well-oiled machine.

Note that. Labour could not find a capable woman.  They imported a Scottish MAN  for their Chief of Staff role.

But what of Sophie Mirabella?

Fine woman. She would be a great Cabinet Minister. Great presence and very effective as an MP. Abbott waited all week for the results of her election before she eventually told him not to wait any longer.

The Left buried Mirabella, then complained she’s not there

First the Left threw everything into defeating Sophie Mirabella, one of two women in Tony Abbott’s shadow cabinet. 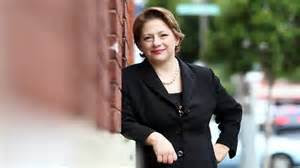 Now, with Mirabella gone, the Left complains Tony Abbott does not have enough women in his Cabinet.

The Left like women. So much that they have pre-selection lists that are ALL- Women candidates. No men allowed.


Not that that is sexist, mind you. Oh no.
That's feminism.

The voters get no say. But the Conservatives go for the best candidates, male or female.


And Sophie was a star performer.

But it looks like she won't get a slot because the Left pulled out all the stops to screw her chances.

The Lefties are 'commiserating' with Julie Bishop:


she who can stare-down a Buffalo.

Another highly competent woman who has done the hard yards.

"Poor Julie, the 'Token Woman' " they call her.


Disgraceful. We’re back to where we were under John Howard, where the critics of the government seem slightly unhinged. And seem, dare I say it, to be projecting more than describing.

Buttrose is noted for her spectacular literally overnight rise from lisping Secretary to Editor of the 'new wave' of women's magazines back some 30 years ago.


It must have been one fabulous night.

It is said, with sound and almost certain evidence that it was spent 'working' with the Boss. As the actress said, "Well it got me the job".


And the Buttrose success? She turned women's magazines from housewife, mother, nice girl - friendly advice and interest into sex-obsession, feminism, and denigration of anything male that would not kow-tow to the insatiable demands for them to buy 'stuff' for the modern, liberated gal. The 'slutosphere' was born.

Ah, yes. The power of advertising, ideology and a scanty nighty. Don't burn your bras girls. Ita has some fashion tips for going to work wearing nothing else but a rose and that bra. ("just make sure it is expensive and bought from one of our advertisers")

Buttrose’s slur suggests Bronwyn Bishop is right - that some people are so habituated to affirmative action appointments that they see a token woman even when staring right at a woman who’s risen entirely on her merits:

(Says Andy Bolt from his seat at the bar)

Julie Bishop is not a ‘token woman’…

Julie Bishop is a woman who has never, as far as I can recall, had a concession made to her on account of her gender.

In fact, I cannot even recall any instances of chivalry towards her displayed by her male colleagues, many of whom have cheerfully undermined and white-anted her just as viciously as they would any man whose job they wanted, which is what happened to her when she was shadow treasurer.

She has played political games with the best of them.

She has pursued a political career with relentless determination, and endured setbacks and humiliations along the way while never succumbing to self-doubt or self-pity… Lonely she might be in Tony Abbott’s Cabinet, yes, but let’s not insult her by dismissing her considerable achievements. ..

Something weird always creeps in to this debate about women’s representation in politics. And that is that some proponents of equal participation find it necessary to endorse only the participation of women they personally admire.


So, right now Abbott has few women in his ranks. Julie Bishop is High amongst them as his Deputy Leader. The Abbott and the Bishop. A strong team.

Andy had a lot more to say too, showing not only what the gang of lefty women are saying but putting some needed context too.

And while Labor complains there are almost no women in Tony Abbott’s cabinet there is not a single woman among Labor’s four leaders - Prime Minister (pro-tem) Kevin Rudd, acting leader Chris Bowen and leadership rivals Anthony Albanese and Bill Shorten.  And of course their 'lady leader'  a month or so back, Ju-LIAR Gillard, was shafted so bad she might get away with crying 'Rape'.


Mind you, some women leaders are so awesome, a cabinet only needs one.

Drink up, me hearties.


Take courage, ladies. Abbott has a fine bunch of  'second string' gals on their 'first tour' as MPs on the way up after a bit of training.