We have all seen the dramas where a policeman is 'bent'. He or she causes mayhem and brings fellow police into disrepute. It happens with Priests too, but the latter are falling behind in the race compared to the police.  Sorting the bent from the faithful servant is a matter of discrimination though, and discrimination is officially a rude word. Unless the PTB are doing the discriminating. Then being bent is policy.

The LGBT brigade are constantly whining about being discriminated against, such that the 'authorities' go to extreme lengths to show that they are lily-white. Even to the point of being lily-livered. 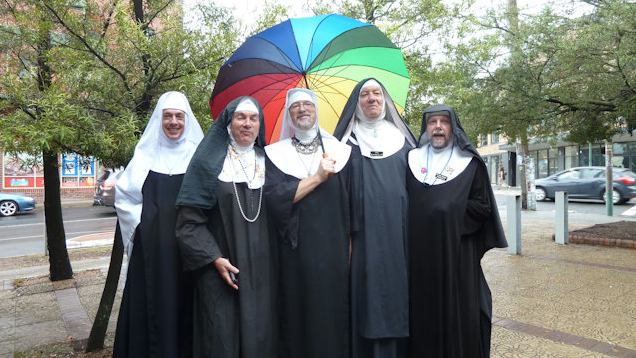 In the UK, that bastion of law, freedom (think Magna Carta), civil behaviour and democracy, the police strive to support the gay 'community'.  "I think my Sergeant wold like a word with you" is now followed by a 'wink, wink'.  The blasphemous gays who deride Nuns are given a police escort down the main streets, in cars especially designed to outrage normal people.

The other police car will attend sister events in Eastbourne, Hastings and London


Well it's certainly an arresting sight - and this brightly painted gay pride patrol car, which debuts this weekend, is set to stay.

Inspector Mark Evans of Sussex Police proudly posted an online photo of one of the cars, explaining it was decorated ready for events in Eastbourne and Hastings.


And the force revealed the cars will retain the eye-catching livery when they return to normal patrols after the carnivals have finished.


But the cash-strapped police force has been criticised for spending taxpayers' money to give two patrol cars a 'gay pride' paint job. 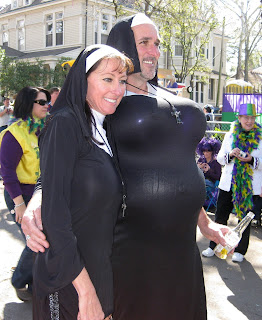 When asked by a member of the public how much had been spent, Insp Evans replied it had 'cost £750 to decorate two cars, mainly paid from the diversity budget'.


The makeover provoked criticism on social media, with Kate234 writing:

'The police should be professional and inclusive at all times but not ridiculous.


'This means not using taxpayers' money to cover their cars with stickers.'


Melee, another online critic, posted: 'A police car ought to have a bit of dignity, not look like a clown car when it turns up at a serious incident.'

The cars will no doubt be used to cart away anyone 'offended' by gays pretending to be Nuns.


But John Steed remarked: 'Looks rather good, I thought.' 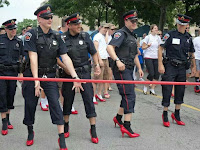 John Steed, eh?  Yeah, sure. An 'Alias' one suspects. One wonders if the same 'diversity budget' paid for the women's shoes that the mangina cops wore recently.

Not the best footwear for catching crims unless these guys (whoops, nearly said gays) are 'agents provocateur' taunting a normal person into guffawing at them.

One car will take part in the Brighton and Hove Pride parade in August, while the other will attend sister events in Eastbourne, Hastings and London.


In 2015 Sussex Police said up to 1,000 jobs are to be cut, including the loss of 500 officers. In August that year the force debuted a similar car painted in Pride colours. This infection is spreading outward from the 'Old Dart'.  They are intent on making Gays and lesbians, bi-sexuals and transgenders a new privileged group. Discriminated against they are not.

No one can deny any service or benfit or job on the basis if their LGBTeeninus.

Not many people, even in the Tavern, are aware that in Britain there are still jobs for which Catholics need not apply.

The Prime Minister's job for example.

No Catholic can be Prime Minister. He or she can be gay as a flower: they can be bi as a hoof; they can swap from male to female to binary-non-cis flowerpot at whim and no-one is allowed to guffaw. But if they are Catholic.... not a chance.

The Queen can be a queen. But he can't be a Catholic. By Law. Queen Victoria said so. She did not believe that Lesbians were well... lesbians. What she would have made of Bis and TGs is anyone's guess, but be careful a policeman in high heels doesn't hear you wonder out loud.

Nor can a Catholic be let anywhere near the little red budget brief case. The Chancellor's job is forbidden to a Catholic.  A Gay one can budget special grants to Gays and even lesbians. Woe betide him/her should they be kind to Catholics.

As there are FAR more Catholics than LGBTs, AND Catholics are still discriminated against more than LGBTs (LGBTs may be PM, Monarch, Chancellor etc, but a Catholic cannot, by Law) how about two cop cars decorated in a

Crucifix, a set of Rosary beads and the Papal Insignia.

The police have brought themselves into disrepute but unlike the Catholic Priest scandals, they have spent public monies  on it and made it a Policy to advantage, support and even laud the 'gay' 'community' that is wreaking havoc upon society.

Drink up (unless you are driving).

We are being driven to distraction by these damned fools.