Feminism was never designed to 'empower' or 'liberate' women: it was not the brainchild of middle-class suffragettes. Their aim was to enfranchise some women so that they might vote and their voices be worth the same as the few men of their day who were allowed to vote: while feminism's aim was to destroy the worth of western womanhood altogether.  It has been at this destruction for decades now and is winning hands down. 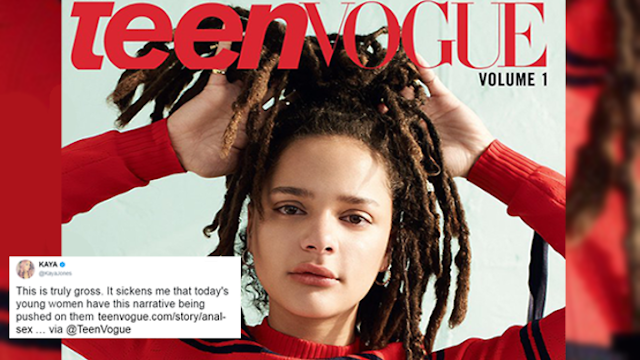 Just as millions of men fell in WW1's carnage battle, so do we see millions of women in the mud and gore today. Back then it was young men in the main; Teens. Who did not have a vote. Today it is teen females, young women, little girls, who are under severe attack. And the media are in the enemy front-line attacking them, driving them further and further into the dirt and depravity.

Women have a firm hold on the media. Little girls emulate their older sisters, who in turn are fed soul- and body-destroying garbage through 'teen magazines'.  By women. By Feminist women. By women who are destroyed themselves. Depravity likes company.

Fortunately the battle-lines are deep and there are many fine, wholesome and courageous women who are fighting back.

This week has seen a small battle enjoined  with a magazine called 'Teen Vogue'. It is clear for whom the writers send out their missiles and shells, their bullet points and paragraphs of poison gas. They aim at young girls.

Levi and Elizabeth and Autumn crowded the bars to bring their views to the fore.  It was about this:

While the article has been praised by some for offering teens access to sex-education that isn’t part of any high school’s curriculum, social media has been ablaze with people calling for a boycott of the magazine. 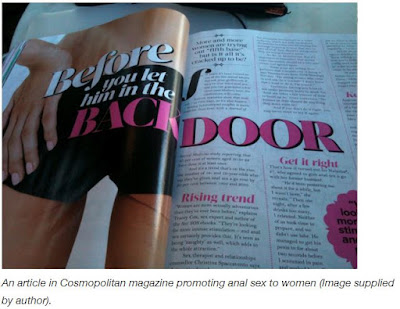 One Facebook user wrote: This is an absolute abomination!!!! What on earth!!


One person wrote: “Absolutely disgusting and uncalled for in a teen magazine. There is a time and place to learn things and this was not it.”

Absolutely disgusting it is. And Elizabeth Johnson, mother of ten who knows a thing or two about sex, went ballistic. She is the Activist Mommy and more power to her. And fine Ale. And a large following of warriors.

Gigi Engle is a straight up pervert who should be prosecuted for "pandering obscenity to a minor." Gigi Engle

She states in her instructions to teenagers... 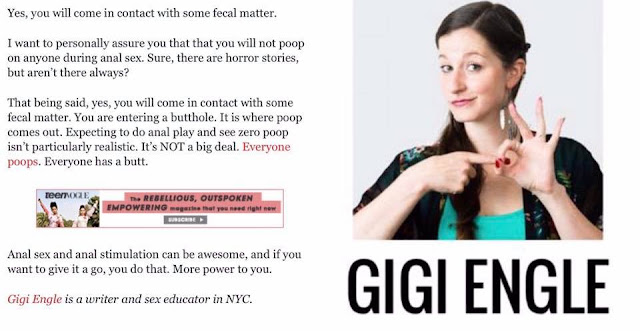 Elizabeth did not stop there. She went on the rampage, sword of rightousness in hand.

"OPERATION PULL TEEN VOGUE" is underway! Teen Vogue Magazine must be pulled from all store shelves! It is a danger to children. Please SHARE to warn others.

Just how did such an article get into a teenage girl's magazine?  Who hired this journalist, Gigi Engle? This 'journalist' is no medical professional. Not even a 'sex therapist'. No, as Elizabeth says, she is just a pervert, out to pervert young girls.

How did it get past the Editor? Who is the Editor in Chief?

This is the woman who facilitates, presides over the perversion of little girls.
And what does an Editor do but find advertisers and sponsors who will pay for all the perversion she choses and carefully selects to publish.

Levi pointed to a possible advertiser to whom Elaine might listen. One that IS in the medico biz. Founded in 1668, Merck is the world's oldest pharmaceutical and chemical company. The founding family remains the majority owner of the publicly listed corporate group.

Merck, Darmstadt, Germany holds the global rights to the Merck name and brand. The only exceptions are the United States and Canada, where the company operates as EMD Serono, EMD Millipore and EMD Performance Materials.

Is Merck behind the teen s*x article?

Would you want your under-18 teen reading this how-to article in what you thought was a fashion and teen celebrity magazine? I don’t think I knew that anyone inserted anything into someone else’s anus when I was under 18. I wasn’t curious about it and I sure wasn’t in danger of subjecting myself to it, regardless of whether a stranger called it “delightful.” 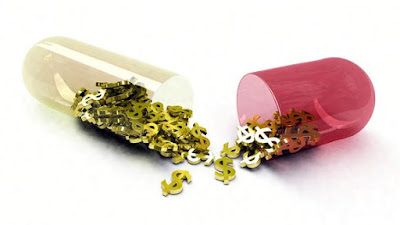 Teen Vogue didn’t point out that the vagina is actually designed for sex, with its dual lining that allows healing from injury, or that the rectum has a single lining because it’s designed as a one way exit for waste. The two openings are not created equally and are not interchangeable. 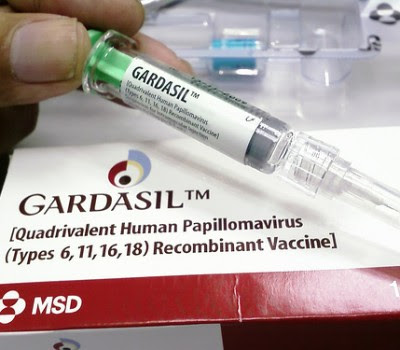 I’ve also seen the argument that the anus is an erogenous zone packed with nerve endings and is made up of erectile tissue, and therefore anuses are sexual. I’m fine with consenting adults who find their anuses to be erogenous zones but the nerve endings are there to tell us when we’ve got to poop and the erectile tissue is there to hold it in until you can pop a squat.


Soooo… enough about that.

Hm. Not exactly. What bothers me is not my inability to deal with it. It’s your inability to see through it and question why something so grossly inappropriate was written for a teen audience.

All of my thoughts on this subject have me wondering why Teen Vogue really published the piece in the first place. Here are my five possible ideas:


I think you know which one I’m going with.

We all know that magazines take money to write articles without announcing that they are an advertisement in disguise, or that they have have corporate sponsorship. This is our everyday media now.


Merck’s relationship with Teen Vogue can be found in:

• This 2013 article about Gardasil saving lives

• This 2015 article hailing the success of the HPV vaccine

• A third 2016 article targeting the vaccine to boys

Do you think Teen Vogue gave Merck all of that publicity for free? I can assure you they did not.

Did you know that your teen magazine’s parent company has a division called Condé Nast Pharma? Isn’t that a kick in the pants?

What we also know is that Merck is suffering because 40% of girls and 50% of boys won’t even submit to one shot of Gardasil, and the CDC just cut Merck’s Gardasil profits by 33% when they put the kibosh on the most-debilitating third dose of the vaccine in December. It’s no wonder Merck began ramping up teen magazine HPV placements in 2016. 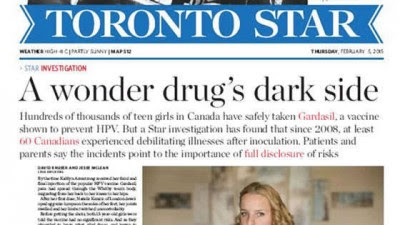 
Does the media think we’re stupid? Were they so late in getting the memo about the Lancet study coming out that they had to quickly dig up old gonorrhea news and regurgitate it ASAP before July 10th?

To learn more about the very real dangers of the HPV vaccine, please visit Ireland’s R.E.G.R.E.T.

If you’d like to write a letter to the editor of Teen Vogue, do so here: web@teenvogue.com

Not only does Merck have form but they have cosen a mouthpiece that has form alike.

Not long ago Teen Vogue was extolling the joys of abortion !

Autumn had something to say about that too.

Do I worry? Of course. I see perversion all around and believe me I do not even look for it.  I am saddened by the decline  of morality and of the western civilisation. I am saddened that so many are not just taken in by lies, but eager and willing. Even to the point of paying for it.

But I am heartened by people, women and men, like Elizabeth and Amber, who I do look for.

He finds them across the road too.

Many of both are on their way to the Tavern.