I am a chap that likes the Military. I served several decades in uniform. But that was in a far more aggressive and competent Armed Force than Australia's almost suburban paint-ball mob. Staunch fellows they may be in some formations - the Oz SAS is a fine and manly mob who can inflict damage as required in battle - but on the whole the Defence Forces here are 'managed' by the most woeful weenies imaginable. 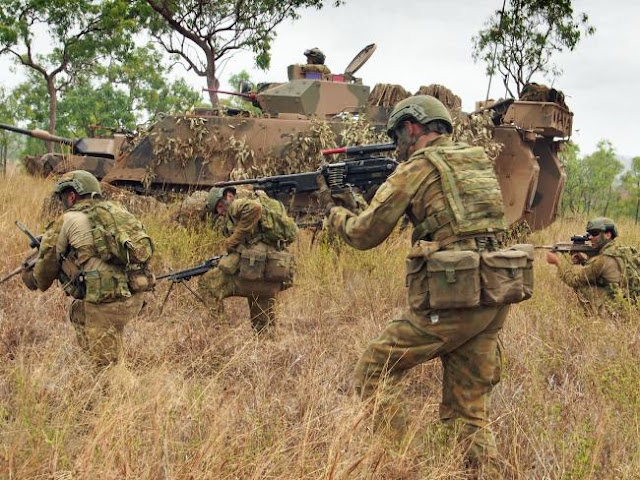 The leadership situation has taken an even worse turn recently than the fiasco of transgender advancements of last year.

The leadership of our armed forces - people who are to lead troops into battle to defend our continent from enemies and kill them before they can damage us - are too aggressive, it seems. They must be told how to appreciate diverse cultures. Yes, those diverse cultures that are quite unlike us and want to kill us.  You can name them yourselves to suit.

I recall many years ago being an Hon Member of the RAAF Officers' Mess in St Kilda. We had just finished a fine Dinning In with a first rate meal in good company; it was time to toast the Queen. The PMC stood up (instead of Mr Vice) to announce that in keeping with 'Elf & Safety rules there would be no smoking afterwards. I was shocked. Here we were, men whose profession was to kill as many of the enemy as we could and drive fear into the rest, who suddenly had 'elf & safety' rules that stopped us smoking a traditional cigar. !!

Joe Hildebrand was hoisted onto a chair to address the customers in the Oz room. I was unsure for a moment as to shutting the doors to the other bars to save embarrassment.


‘Self-aware’ Army officers to get coached in ‘cross-cultural competence’

Wotta lotta bullshit.  A soldier has to be ready to fight, not to hold hands, said JJ.


THE Australian Army is hiring private “executive coaches” to teach its senior officers “self-awareness”, “emotional intelligence”, “cross-cultural competence” and “interpersonal maturity” in an effort to combat perceptions that they are....

too “authoritarian, assertive and angry”.

It has also commissioned “psychometric and psychological testing” as part of the Australian Defence Force’s push to transform its culture to fit with modern standards.

The Department of Defence has tendered for “executive coaching services” for private and group sessions with its top brass that would not be out of place on the bureaucratic satire Utopia.

We have a Defence Minister who could not run half a kilometer with a full bergen and carrying a rifle. She could not even run ten metres without getting too puffed for another step.  Yet she can give the order to MEN !!  Soldiers. It is the 'Christine Nixon' syndrome writ large.

The top priority referred to in the tender documents is “Self Awareness of Strategic Leadership Style”.

Defence describes this as: “Exploration of personal values, beliefs, attitudes and associations and their impact on personal leadership behaviour.”

The 12-month contract — which can be extended for further years — is for a program of up to six sessions for 24 officers, with individual coaching for Brigadiers and Major-Generals and group coaching for Lieutenant Colonels and Colonels. 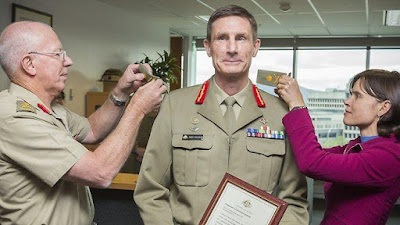 In an accompanying document entitled “Why the Australian Army needs a co-ordinated Executive Coaching Program”, the tender refers to an open letter by Chief of Army Lieutenant General Angus Campbell to his senior leadership group.

I have mentioned before that the size and capacity of our Army does not warrant a Lt General.  It is far too small. There is no liklihood of any Australian Army Officer having autonomous authority over an entire foreign region. That is the level of the rank and has been for 2000 years.


“General Campbell reflects that perceptions of Army officers as bureaucratically authoritarian, assertive and angry do not fit with the evolving cultural requirements of Army and are not helpful in a joint strategic environment,” the document states.

So, to prove the point he is being auhoritarian imposing this crap  and would no doubt get angry if some chap just below him in rank told him to shove it up his backside.

“General Campbell suggests that what is helpful is ethically informed, values based leadership that inspires, resources and enables subordinates to achieve their best work.”


One characteristic the Army is seeking to instil in its officers is described as “cross-cultural competence”, which it defines as “understand(ing) cultures beyond one’s professional and national boundaries”.

How did such people get to such level? Is the Peter Principle alive and driving our Defences?

Officers will be expected to “work effectively with those from other cultures, generations, departments and gender”.

Another is called “interpersonal maturity”, which is described as “the ongoing development of self-awareness and emotional intelligence”.

It also seeks to develop “‘small p’ political sense”, which is “exerting influence across organisations and teams” and communications skills to “succinctly help others to understand complicated issues” and exert “interpersonal influence”.

They will NOT, of course, try to kill people. They may water ski in exotic places; they may travel to meet strange and interesting people and suss them out. They may NOT have a plan to kill everyone in the room. That would be insensitive.


The document also expects officers to know their “identity” which is “understanding of one’s own values and how they shape leadership style”.

So, let us poke the nuances here, with a pointy stick. A chap gets to Colonel level, or Brigadier, and he is assumed to not yet have grasped his 'identity'?  His own values would still be a mystery to him? We do already know that one or some had failed in that regard even to the point of not grasping their manly appendage frequently enough to know they were blokes and not blokesses. Will the 'consultants' help them? Leave the other men to manly matters.

Just a day after President Trump has put his Defence Forces wellies on and his gardening gloves and spent a day weeding out weenies and others whose 'identity' is unknown e'en to themselves, we have our mob getting dress patterns out and passing lace and ribbons around.

Will someone speak out? Please.

Thank goodness some older and wiser, harder-headed one can and did.


Australian Defence Association executive director Neil James said it was a mistake to think the Army needed to change its leadership style. “You don’t want your army to change too much,” he said.

“You want your army to win wars.”

Mr James, who served in the army for 31 years, also said it was a popular misconception that the Army was full of officers who were too aggressive. “Armies don’t work because people yell at people,” he said. “It’s teamwork that drives the army, not shouting.”

He said leadership skills were already taught extensively within the Army and this program seemed to be more directed at officers dispelling that misconception when dealing with other people and organisations, rather than actually changing themselves.

But even he is struggling. It is no 'mistake' at play here.

It is a deliberate attempt to emasculate our armed forces.

“It doesn’t matter what coaching you give, there’ll be people out there in society who think that. But that’s society’s problem, not the army’s.”

The tender also asks for providers to have expertise in applying psychometric testing during the coaching sessions.

“It is preferred that the supplier is also able to demonstrate suitable qualifications and expertise in the use of a range of psychometric and psychological testing and assessment tools for use within coaching, as determined by the Australian Health Practitioner Regulation Agency or similar body,” it states.

No. No. No. Any advisor to men of rank should be marksmen first and be able to do a route march with full kit. Until they can do that they should STFU.


It also raises the question of officers being psychologically re-evaluated over their careers and whether this should be included in the course, stating: “Defence does not have a standardised program that assesses personality styles or psychological types throughout officers’ careers.”

Military skills and military arts are what leaders need.

Their troops demand it and rely upon it. They respect that.

They will follow proper leaders, not the 'pretty-please' weenies with ribbons in their hair that our fat controller Defence Minister is trying to make.

Pray they do not get called into action until this is sorted.