Battle-hardened soldiers are not the only ones on the Front Line in the great war that our civilisation is fighting. There are many weapons in play and many fine, heroic souls wielding them.

The Tavern Walls are decked with pieces of armour and pictures of Heroes, but unsung, ordinary people are there too.

Salena Zito stopped by for a cool drink and told us about some.

When the family of seven sitting near the front of Connie's Corner restaurant discreetly held hands and bowed their heads in prayer before their meal, no one in the bustling diner seemed surprised.


At the same moment, 400 miles east at Sotheby's auction house in New York City, "Saying Grace" sold for $46 million. The painting by Norman Rockwell vividly depicts a crowded restaurant (not so unlike Connie's Corner) where a grandmother and her grandson pray at a table as truck drivers watch.


In the 62 years since Rockwell brought a family in prayer to life on canvas, some aspects of how Americans conduct their lives have remained the same - such as a family praying before dinner in this northern panhandle town.

Yes, we join them in Prayer, here in the Tavern.

In a western world beset with middle-eastern and eastern pressures; with 'insider' destructive forces from Socialism and Feminism, homosexuality, lewdness; and anti-Christian hatreds of all sorts, there are ordinary people giving Thanks for the great joys that we can have and for the Protection from those Forces of Darkness.

"I love that about Chester and small-town American cities," said Scott Paulsen about the family giving thanks for their food. The 54-year-old WDVE morning radio host in Pittsburgh spent his childhood here, exploring the nearby woods and finding adventure along the train tracks.


Connie's Corner was Allison's Restaurant when Paulsen moved here from Baltimore as a seventh-grader. Connie Hissam was a waitress then; today she owns the restaurant. "What a great American success story," Paulsen said of her rise from employee to employer. 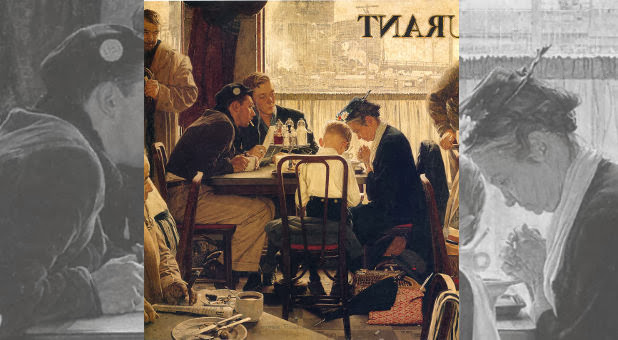 When Paulsen's family moved to Chester for his father's management job in the steel industry, a red-and-white building in the shape of a teapot sat across the street from their new home; attached to a pottery outlet, it was used to sell trinkets and hot dogs to travelers. Today, after the town rallied to save the 1930s roadside relic, it sits proudly on a corner of the Lincoln Highway, a beacon to locals and visitors.


In the beginning, Chester's prosperity depended on the very soil upon which it rested and the river that curved around it; the clay and the water were ideal for making pottery. The town rose and fell with both the pottery and steel industries.

Not for these people the whining and demanding; no calls for 'Rights' and 'Empowerment'; not even a false, mendacious cry for 'Hope and Change'.

"We do fine here," said Hissam, who has owned the restaurant for nearly 10 years. The Mountaineer Casino Racetrack & Resort and the Homer Laughlin factory are the area's biggest local employers, she said.n her diner, brightly colored Fiestaware dishes and platters made a mile away at the Homer Laughlin factory are filled with eggs and bacon, turkey and stuffing, meatloaf and mashed potatoes.


Homer Laughlin employed more than 3,500 locals in its heyday in 1929, but the decline in American-made pottery already had begun when tariffs were removed from pottery imports in 1910.


This is a slice of America that has ebbed and flourished over the years. Yet, for the most part, the people who live here remain the same;

they still go to the same church on Sundays,

still walk "up the street" to pick up milk and eggs, and still go hunting with friends and family.


What they don't do is protest for higher wages outside a small business like Connie's Corner; they don't feel entitled to much of anything - other than some peace and quiet to watch a football game or a boxing match - and they find irony in President Obama speaking about economic inequality while standing on one of the wealthiest patches of real estate in the country.


Most of all, they enjoy hard work and being part of a community. Just ask a woman named Irene, who retired from Homer Laughlin after 42 years as a brusher in the decorating department; she returned to the plant less than two years later, she said, because she missed both of those things.

played out in real life here,

gives an observer the emotional tug of roots and continuity; it makes you feel good about yourself, your community and your relationships, and it provides a texture that is sometimes missing in our daily lives.
Our constant news cycle and the politics of Washington tend to make us believe that we live in a nation filled with self-indulgence and hatred. But most folks don't see it that way. The truth is, we are surrounded by good deeds. They are not exceptional, newsworthy moments, but they are there - and all you have to do is look up from your iPhone to see them.

Contributing Editor Salena Zito is a political analyst, reporter and editorial page columnist at the Pittsburgh Tribune-Review. She can be reached at szito@tribweb.com.

She is welcome at the Tavern.


At the last minute the Drummer finished her 'set' and sat for a drink. She too recalled the 'old' days of pre-feminist diatribes and showed where the ordinary folk's Front Lines are today. 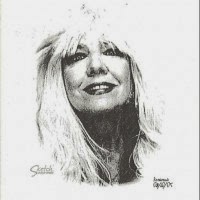 
I held his hand in my right, his beautiful cross in my left. I have never been as nervous ever again in my lifetime, as I was at that moment. It was a moment right out of every Hallmark movie ever written, except…… I was five. So was Chris.


And what’s even more amazing, is I remember worrying that the teachers might not want us to hold hands. After all, in an auditorium of the whole grade school, (about 400 kids) we were the only two holding hands.  There were teachers all around us….watching. Did they see?

Yes—- they did. But, they did nothing. They looked, and walked away. To them, it was simply sweet.Heidi and Pater.

Back then, teachers were actually, smart.


Back then, kids weren’t suspected of sexual harassment.

Back then, children’s love was innocent.

Back then, teachers were adults.

I remember a few of them whispering and smiling. No doubt, a precious memory for them too.

And here’s the point: When adults reprimand the natural feelings of love that children have of each other, they spoil the trust and friendship that needs to be developed when they get older. They need to trust each other and that starts when they are young. The teachers of today are teaching that all touching is sex. And they don’t even know what sex is yet.

They are really screwing up love, and trust, which leads to marriage. What the hell is wrong with them?

By now, everyone knows about

the little boy who got expelled from school for kissing some girls hand.

And to put insanity onto it, they called it sexual harassment.

The school system is out to change all that. There is no love, only sex.
But hey, I’m not worried about the kids. There will always be that first love at five. It’s just a shame that more people don’t stand up to the idiots we are paying to NOT BRAINWASH OUR KIDS

Just because you’re screwed up with leftist feminist bull-crap, doesn’t mean you have a right to destroy our children.


And that is just what our 'Progressive' society is trying to do.

Whatever Battle-Front you find yourself on, with whatever sort of foe in front of you seeking your destruction; whatever your chosen way of responding and fighting them back, remember this.....


What does it profit you if you gain the whole world but suffer the loss of your own Soul.

When it comes down to it, we are all on the Front Line.

The question to ask ourselves is, which way are we facing?

Who are we facing?

Are you a 'Progressive'? Even a little?

An army, even the camp-followers, marches on its stomach. Fighting people need victuals. Sustenance. Nutrition.

The Tavern supplies Grace, the God-provided nutrient for the Soul. Grace can heal even a 'Progressive'.

Email ThisBlogThis!Share to TwitterShare to FacebookShare to Pinterest
Labels: Spirits Bar, US Room