That is NOT what he said.

If I had a pint (to resell of course) for every time I had to remind an argumentative customer that "He didn't actually say that", I would be rolling in clover. Tavern Keepers are forever intervening to set records a bit straighter and 'keep the peace'.

But newspapers and TV hardly ever step up to correct statements. They much more often perpetrate inaccuracies themselves. One might ask if they do it deliberately.

Take the Pope for instance. He came in for a whacking the other day for mentioning 'Capitalism' in a critical manner. The lefty, anti-Christian news and commentariapparachik mob leaped to strike blows, going where Angels and even prudent chaps do not go. 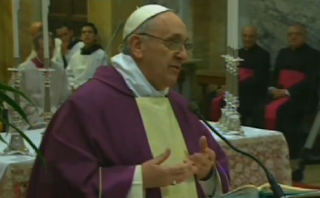 This led to the propagation of headlines such as by NBC: “Pope Francis attacks ‘tyranny’ of unfettered capitalism”.

Or by the Daily Kos: “Pope Francis: Unfettered Capitalism Is ‘Tyranny’”.

Or by the Nation: “The Pope Versus Unfettered Capitalism”.

Even the Wiki warriors posting on Wikipedia fell for it, apparently forgetting to cite a primary source, writing under the “Capitalism” entry, “Pope Francis described unfettered capitalism as ‘a new tyranny.’”

Robert Romano dropped in to do a bit of peace keeping and correcting. I put a pint on the bar for him as he let rip against the stupid and feckless 'news'. And he gave a small economics and political 'straightening' too.

All too often people drunk on their own power to manipulate, create 'Straw men' to knock over.


It is an old ploy showing
Intellectual Dishonesty.


Did the Pope attack ‘unfettered capitalism’?


Did Pope Francis really lay a broadside into what he called “unfettered capitalism”?

That is certainly what headline writers the world over would have you believe. Well, at least the ones that picked up Reuters’ account of the Pope’s new apostolic exhortation, “The Joy of the Gospel,” a news story that was then syndicated globally.

So prevalent were the headlines, they even convinced conservative talk show host Rush Limbaugh that the pontiff had actually written it.

There is, however, one acute problem with the quote.

Search the document for yourself and search for the words, either “unfettered” or “capitalism.” They’re not there.

The actual phrase “unfettered capitalism,” ironically, was apparently coined in 1942 by economist Joseph Schumpeter, himself a critic of communism — he even had a chapter entitled “The Dictatorship of the Proletariat.”

An even greater irony is that the phrase has since been adopted by various socialist and Marxist writers as a pejorative against capitalism’s supposed excesses.

But before returning to Francis, let us pause on Schumpeter for a moment, for it was he who famously argued that capitalism, after raising standards of living in a way no other system had ever before in history, would eventually fall, but not through violent uprising.

Instead, it would succumb as a victim of its own success that “undermines the social institutions which protect it.”

That, through the passage of time it would morph into what he termed a “corporative state.” It would become “bureaucratized,” and since the system “by its very achievements, tends to automatize progress, we conclude that it tends to make itself superfluous — to break to pieces under the pressure of its own success.” It would give way, he wrote, to socialism.

The entrepreneurs would be replaced by bureaucrats, and then, when the daggers came out and government stepped in to take over, those very bureaucrats would simply surrender.

Just look, he wrote, at the manner in which these “capitalist interests… as a whole behave when facing direct attack. They talk and plead — or hire people to do it for them; they snatch at every chance of compromise; they are ever ready to give in; they never put up a fight under the flag of their own ideals and interests.”

In short, it “absorbs the slogans of current radicalism and seems quite willing to undergo a process of conversion to a creed hostile to its very existence. Haltingly and grudgingly it concedes in part the implications of that creed.”

One need look no further than the experience of 2008 through 2010, the bank bailouts, the seizure of AIG, the conservatorship of Fannie Mae and Freddie Mac, the government purchase of GM and Chrysler, the Federal Reserve’s quantitative easing programs, and then Obamacare, the takeover of the student loan industry, and Dodd-Frank’s financial regulations to conclude that Schumpeter at least in this narrow regard was indeed prophetic, even if he would have quibbled with the idea he was making any sort of prediction.

Most of this is of  course quite recent. There have been some pretty dreadful 'Leaders' in this and the past generations but few can match the current crop of 'Statesmen'. 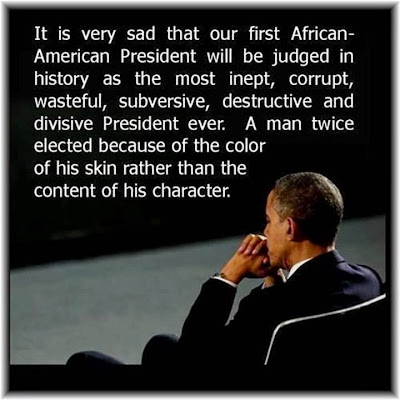 Not that this Taverner sheets all the blame onto Obama. His predecessors started the ball rolling, but at least did not try as well and as successfully to 'flannel' the public with his mendacious 'Hope and Change'.


These were all episodes in a very short span of very big businesses — and their supposed representatives in government on the right side of the political spectrum — seemingly ceding their own interests, making way for

and even going as far in some cases as to argue in favor of it.

This societal transformation, a revolution to be sure and still ongoing, is being achieved without firing a shot.

Which brings us back to what Pope Francis actually wrote.

He criticized those who “assume that economic growth, encouraged by a free market, will inevitably succeed in bringing about greater justice and inclusiveness in the world.”

Here, Francis’ discussion of the so-called “free market” is very much misplaced. For, nobody paying any level of attention can look at our current system and call it a “free market.”

The housing bubble that brought about the current recession is a case in point, where government-directed finance to achieve self-styled “affordable housing goals” found its way to millions of borrowers who it turned out could not afford the homes they were purchasing.

Trillions of dollars flowed from the Government Sponsored Enterprises Fannie Mae and Freddie Mac, driving the market with little more than a printing press.

This was no “autonomy of the marketplace,” or simply “financial speculation,” as Francis described.

It was an asset bubble the likes of which had never been seen in economic history, and without government-created debt — without the backing of the federal government — it would never have been possible. Never.


Francis is right that there is a “crude and naïve trust in the goodness of those wielding economic power and in the sacralized workings of the prevailing economic system,” which he called “a new tyranny.”

But Francis’ critique really should lay at the feet of the corporatists Schumpeter described, and the central planners they have long since surrendered to.

For it is they who bear responsibility for the consequences of their own policies, including those who now suffer under them.

Francis accurately described the “masses of people [who] find themselves excluded and marginalized: without work, without possibilities, without any means of escape… the outcast, the ‘leftovers’” living under what he called “a globalization of indifference.”

Observe high youth unemployment throughout Europe and rising here, too, to get an idea who he is talking about. Those being excluded from opportunity today, an entire generation, are no figment. This is a real problem.

Overall, Francis is pointing to the rot of the system that Schumpeter had 71 years ago foreseen.

But, no one should be confused that the rot is a “free market” phenomenon, when instead it is the corrosion caused by decades of central-planning and in particular government-directed credit creation.

This is the necessary destruction brought about when government, not markets composed of individuals acting in their own self-interest, makes such sweeping economic decisions.


Now. Are you all quite clear?

Have a drink of clarity and honest criticism.

Oh, and a smack on the bottom for Mz O'Leary and then some prayers for her Soul. If she apologises I might even let her mop the floor in the Crypt.

The best bet for 'Hope and Change' will come from Individual Integrity.