Men Going their own Way

A grand bunch of guys from the past gathered in the bar today, reminiscing on their Glory Days. I knew some of them. Colleagues from a previous life. Some were quite young when I was coming to the end of my time.

Military types tend to do that from time to time. Those that stay in the saddles and even those Knights that take to Tavern Keeping in their later years.

Men go their own way.

I have many friends on the 'Men's Rights Movement' and amongst them the talk often turns to the 'single man's life'. A Life which for many is a necessity in a society where women seem to reject so much of the normal masculinity of good men in their hurry to escape their own fantasies of  the small minority of not so nice men.

It is difficult to be a Good man in today's society and even those that are 'Good' teeter on the edge of the Abyss sometimes. Every military man knows this. His lot in life is to stare into that abyss from time to time.

I will talk of this and more in a moment but first let us recall. Let us see the Knights of today and listen to their refrain.

Men have always gone their own way. Men of action and devotion, that is. Adventurers, discoverers, inventors. Unlike many of the young men in the MGTOW branches of the MRM they plan, they study, they take great self-discipline and skills which are wrest from long experience and effort. They search for the talents and the abilities in themselves and make Character.

They do something more than just useful to themselves. They serve. They take a strong position on the great waves of life.

See the modern Knight in his cockpit, before battle.

In a previous era the Knight on his steed with lance and sword could wreak havoc against similar foes. Today's Knights have steeds of steel that fly and  have lances with warheads thrown instead of held and with warheads that can devastate a town.

They sit: some pray: some meditate on what they have to do today.


It is so easy to do wrong.
They are thinking men.

Thinking.... "I may die today".
Some might hear the echo of his Viking ancestors.
'It is a good day to die'.
﻿ 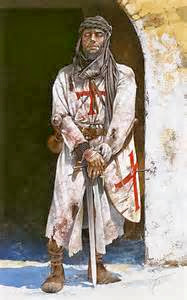 Will a Good man die today?

Few of those older models of MGTOW ran from anything. Few were 'driven away'. They were not afraid.

Many were Good men. But as I said before, some teetered on the Abyss, as do so many men in the military.

With great Power comes a great temptation to do evil.

The Abyss stares back and draws them in.

The power to kill confers special responsibility and demand on Character.

History is replete with fallen heroes.

I commanded men in my day. I used to tell them..." You must kill the enemy, but not hate them. They are men, boys, just like you."

Today it is anyone who gets in the way and one's aim must be surer than ever.

But it is not the life or death of the enemy that matters.

We all die sometime by some means. No. It is the State of your Soul that matters. His too.

Life is hard whether one is good or bad. Or lazy. Life gives so much opportunity to engage with the world. But every engagement also provides the grist for the mill of Character creating. And for choice.

I have dealt with 'choice ' before.

The 'main' choice is between Good and Evil. In our own hearts and minds.

Our young men face choices. Too many excuse their choices by blaming someone or something else. 'Twas always this.


Your life is made by the world you live in.
You are made by You.

You will lose your life one day.

When you have stared into the Abyss and walked back from it, not fearful or blaming, but having chosen, then you have earned the Glory.

You can go to your rest knowing that you won the battle.

And to the raised glasses of your peers.


Pax Dei. May God strap you in.