What's in the Water?

This post discusses matters that may make some people uncomfortable.

The world is going mad. We all know that. Well, all right-thinking people know that.  OK, someone in the Tavern said so. And they actually put their finger on the cause.

Its what is in the water.

It is common knowledge that 'people' are putting 'stuff' in our water. Well, there are many who say so. Right-thinking people. And we are getting wind of it. Exposure of the dangers is happening now. At last.

Many are  insidious and dangerous. 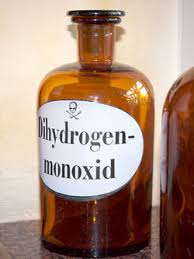 They can cause death and even addiction ! Even amongst the fit and healthy.

Chemicals usage can be deceptive. 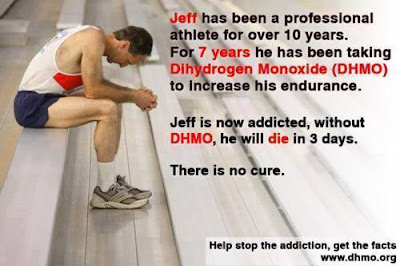 And possibly the most common and most 'secret' chemical in our water is now being talked about; demands are being made to ban it. High time, say many people. OK, some people. OK, left thinking people. On the news in fact.


Fortunately and despite the glaring fact that authorities are behind it, authorities themselves are even warning us about DHMO.


A lady (I say that from politeness) in America who organises an annual fun day in her neighbourhood, ran afoul of using the stuff recently. The Cops were called out.

The day was August 26 and Tammy Hall had just wrapped up one of the annual water fights she hosts in her Bluff Heights neighborhood. There were hundreds of water balloons, super soakers and kiddie pool refill stations that fueled the ranks of the nearly 20 participants. Signs were posted all around her home at the corner of Temple and Third, advising that a water war pitting adults versus children was scheduled for noon.


One sign that Hall hastily authored with a red Sharpie marker read, “Sometime around midday, Temple & 3rd is declared a war zone. We will not care if you are unarmed. ☺ If you enter the area you may be exposed to large amounts of dihydrogen monoxide. It would be better if you came prepared. Safety third!!” 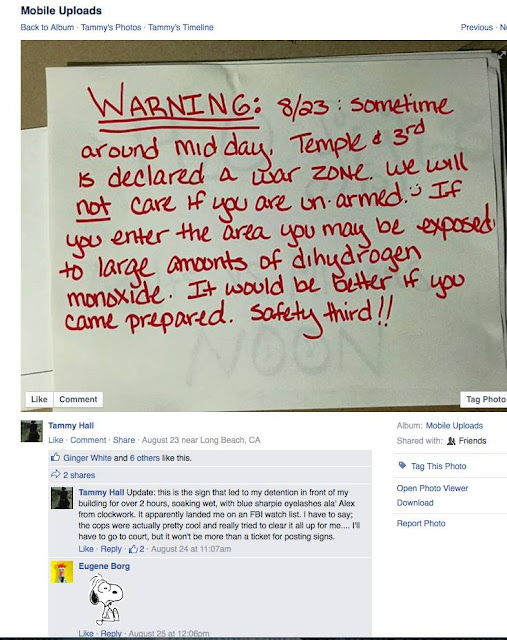 When the two Long Beach Police Department (LBPD) vehicles pulled up to her home, the sign was the furthest thing from Hall’s mind.


“We had anticipated that of course sometimes they shut these things down, so we ran over,” Hall said of the lemonade stand that her two daughters were operating.

“That’s when they informed me that there had been some sort of FBI terror alert that had just come out that morning around the same time that my sign was reported.”


Hall was detained for over two and half hours while the officers communicated over their radios, letting Hall know that while they were aware they were responding to a water fight “it was out of the LBPD’s hands."

Hall was cited for posting illegal signage under the Long Beach Municipal Code and later released, despite an ongoing investigation.

Hall, who has a scheduled court date at the end of the month regarding her citation, said the situation was both eye-opening and dumbfounding. In an age where most people have smartphones, she was of the opinion that it was ridiculous to think a person would get reported for a threatening sign that also contained a smiley face.

“If you see something that causes you some alarm you’d look into what you’re alarmed about, I would think,” Hall said. “Never in my wildest dreams did I think people would actually be scared. I thought actually it would be a good laugh.”

Hall is not the only one to run afoul of hydrophobia.

But worse are some of those who want it banned . Petitions have been produced. People have signed up in droves.

These are NOT right-thinking people.


OK, so people are stupid. Well,  not right-thinking people. But there are a lot of dummies around. Lets continue just a bit.

In 2004, a proposed law that would’ve banned the use of foam cups in Aliso Viejo was placed on its city council agenda because the cups contained dihydrogen monoxide. Staff reports characterized the compound as a threat to health and safety before it was eventually pulled from the agenda because of “bad research."

A Canadian lawmaker tried to ban Dihydrogen Monoxide from all federal buildings in the country in 2010 because of its prevalence in toxic compounds and it being lethal if inhaled.

The politician, Andrew Scheer, went on to become Canada’s Speaker of the House of Commons.


Most recently, two Florida disc jockeys (DJs) were suspended from the air in 2013 after an April Fool's Day joke where they said on air that Dihydrogen Monoxide was coming out of Floridians’ taps and was not safe for consumption. The hoax caused concern among residents, resulting in numerous calls to water suppliers.

The lesson is clear.

You cannot be too careful.

Saving even ONE LIFE would make drinking only fine Ale in the Tavern worthwhile. Hey, its from the very best Supplier.

You know it makes sense.