Updated.
While the world's attention has been on the Pope and his catastrophic visit to the USA,  barely anyone noticed the new Oz Prime Minister making his first foray into greasing palms with my money (well, yours, more likely) and licking arses (and perhaps other bits of anatomy).

I barely know what gets into politicians who denounce half the population in order to suck up to the other half. And I am not talking of the left-right divide.

That line from 'Ghostbusters', always spings to mind.... "Lenny, think of all those Registered Voters".

Well, paraphrased, but heck Oz is in the grips of a mass hysteria (very aptly called) and we are ruled over by Mr Dickless Turnbull who is the consumate 'ladies man'. Rich, smooth-talking et al.


Not all his fault, of course, as Abbott was in thrall to the wimmyn too and Dickless Turnbull simply took the next policy announcement Abbott had already lined up.

Barely a peep of protest in the press of course, swamped as we were by adulation pieces in print and on TV showing the superwoman de jour Rosemary Batty.

What a batty woman she is too. And the lefty press was already seduced by the lefty now in charge of the righties.

But Miranda dropped in for a swift half as she travelled about ringing the leper bell.

If unsuitable women stopped having kids with feckless men, DV wouldn’t be such a problem

IT IS a grim portent that Malcolm Turnbull’s first policy announcement as Prime Minister was a $100 million gimmick blaming domestic violence on gender inequality.

“Women must be respected,” thundered Turnbull. “Disrespecting women is unacceptable.”

He has drunk the feminist Kool-Aid.

What about the men's vote, Dickless?

Already there are Liberals (that is, conservatives in oz-speak) turning in their membership registrations.

Time, I think, for a concerted effort by Men to make it clear that they too will not support a gummunt that disrespects men.

Poverty is the cause of domestic violence, the desperate chaos of the underclass, played out in welfare dependency, mental illness, alcohol and drug abuse, especially psychosis-inducing ice.

Demonising men, and pouring taxpayer money into permanent meddling bureaucracies, will do nothing to alleviate domestic tragedy.

It just increases government’s role in our lives, and further disempowers vulnerable men.

Of course, Turnbull, a few days in the job, was simply announcing a plan that Tony Abbott and his chief of staff Peta Credlin had cooked up to try to improve his vote with women.

Beginning as a diversion from the knighthood fiasco of January, it involved Australian of the Year, Rosie Batty, who has become the untouchable expert on domestic violence. 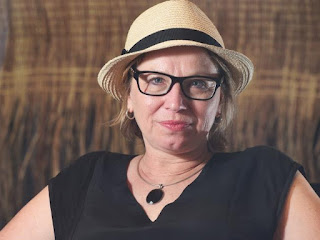 Batty was front and centre of last week’s announcement: “This is a gender issue … we need to respect and value women as equals.”

No one could fail to be moved by her tragedy, the loss of her only son, 11-year-old Luke, murdered by his father.

But how did the murder of a little boy by his mentally ill, drug-taking father become all about “respecting women”?

It is never noted that poor Rosie chose to marry (did she marry or simply co-habit? No-one speaks of it) such a man and chose to have him father her child. Of all the fine, upstanding, 'Nice' men she could have chosen, she went for what clearly turned out to be a 'bad boy'.

Talk about a self-fulfilling prophesy.

Drug and alcohol abuse and mental illness are specific problems which properly targeted government policy might help alleviate. “Respecting women” is not.

The excitable minister for women Michaelia Cash stood alongside Turnbull and Batty, talking a lot of gobbledygook which shows only that she has a touching faith in bureaucracy, as in “an action item under the Second Action Plan of the National Action Plan to Reduce Violence Against Women and Children.”

Honestly. That National Action Plan, anyway, is a hangover from Julia Gillard, another hotchpotch of bureaucracies which exist for reports and awards and meetings and conferences and which soak up millions of dollars while doing nothing to help people trapped in chaotic lives break the welfare cycle.

Worse, the underlying narrative is about disrespecting men.

Turnbull claimed: “one in four young men think it’s OK to slap a girl when you’ve been drinking”.

Anyone with a passing acquaintance with young men knows it’s absurd.

Cash repeated the claim, based on statistics from market research company Hall & Partners Open Mind, which conducted an online survey last year, answered by 3000 teenagers, young adults and parents. Plus some focus groups.

The report is full of gross generalisations with no evidence.

It’s not exactly peer-reviewed scientific research, yet it’s blithely parroted by the PM and his minister for women.

How does slandering young men encourage “respect for women”? That market research was commissioned by the taxpayer-funded domestic violence lobbying group “Our Watch”.

Our Watch is chaired by feminist former Democrats Senator Natasha Stott Despoja, curiously appointed by Abbott as Australia’s Ambassador for Women and Girls. She claims: “Violence against women does not discriminate, regardless of ethnicity, social status and geography.”

But the actual statistics show a different reality.

Violence against women does discriminate, starkly. It is concentrated in communities with a high indigenous population, in the Northern Territory, in impoverished rural towns, in the urban fringes where the underclass lives, where welfare has emasculated men, where unemployment is high and education poor, and where drug and alcohol abuse is rife. These are the obvious preconditions for violence.

If you want to break the cycle of violence....,

end the welfare incentive for unsuitable women to keep having children to a string of feckless men.

Some facts, from the NSW Bureau of Crime Statistics: Domestic violence is worst in the small remote town of Bourke. With its high indigenous population, it has a rate of 4195.6 offences per 100,000 population (in fact, Bourke’s crime rate makes it more dangerous per capita than any country on earth).

And this is 'top of the league'.

You get the picture.

Compare those rates to the affluent areas of Sydney; Kuringai has the lowest domestic violence in NSW with 66.1 crimes per 100,000, followed by Hunters Hill, Lane Cove, Hornsby, Manly, Willoughby, and so on.

That announcement last week wasn’t about helping people in Bourke and Campbelltown.

It was about making the prime minister, whoever he is this week, win approval from feminists.

Thanks Miranda, m'dear. Have a drink. You will need one.

No sooner had Miranda finished speaking and started to take a sip from her well-deserved glass of fine wine, than the trolls, verbal muggers, Emily's List wannabees and feminist thugs assailed her. They were shouting obceneties and outright lies through the Tavern windows and my Bouncer had to call in help from Mrs Bouncer.

Miranda fired back. Here's just a brief snippet and you can follow the rest via the link:

Campaigns such as Destroy the Joint’s Counting Women project insist on making domestic violence a gender issue. It claims 66 women are victims this year, with the implication these are all “intimate partner” homicides, perpetrated by males.

In fact, only about half of the homicides cited could be classified as having a male partner or ex-partner identified as the killer.

Some of the 66 victims were killed by women, by sisters, daughters, a female neighbour or, in one case, a female ex-lover of the victim’s husband, as well as by brothers, fathers, and sons.

I do wish it was as easy to get rid of 'Dickless' Turnbull as Ghostbusters showed. The quality of his affectionados tells us a lot.

By the way, he dresses so finely. Has anyone checked his underwear draw?