Updated Christmas Eve
This is a place for heroes as it says on the wall, and we welcome them from wherever they may be. So one was brought to my attention just the other day. She is from Canada.

Many heroes go quite unsung, and heroines too. Few of my customers have ever heard of this lady we shall look at and hail, and Christie Blatchford wanted me to put that right.

I have a friend, Graham, who has a similar tale of quiet, selflessness and his has been told here before, so to cut to the chase, let me show you all about

At 11:02 Wednesday morning, Linda Gibbons sat uncomfortably, hands cuffed behind her back, in the rear seat of a Toronto Police squad car. 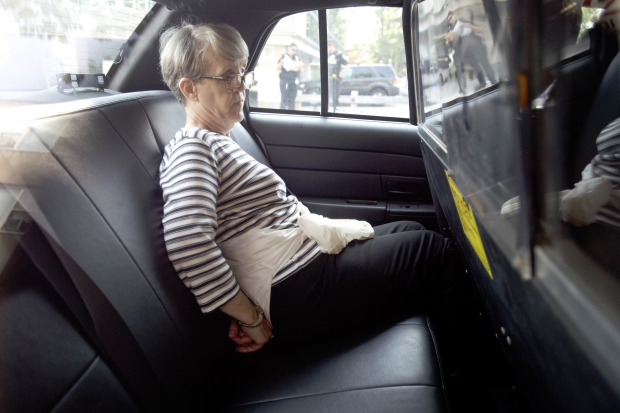 She was taken first to 53 Division, transferred to 55 Division where all women are held overnight pending their first court appearance, and is expected to be paraded for a show-cause hearing Thursday morning.

She is an unrepentant recidivist, a hopeless repeat offender.

She is a serious criminal.

Gibbons doesn’t count her arrests, but probably she’s been in the back seat of squad cars a couple of dozen times in the past two decades — and that’s including the five years she took off to care for her dying father.

She has spent an astonishing total of 10 years and seven months behind bars.

She’s a veteran pro-life protester outside Toronto abortion clinics. She’s on the wrong side (the pro-life side) of the wrong issue (abortion) and yet she persists in trying to make her voice heard. 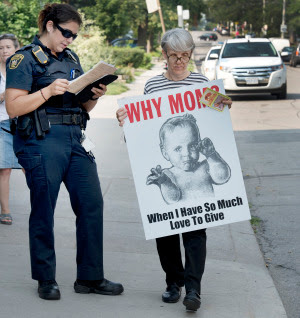 Canadians have largely forgotten the whole abortion issue; it barely qualifies as an issue anymore. There’s no criminal law prohibiting abortion in this country, and in most provinces, though access remains unequal, the procedure is covered by provincial health plans. Even Pope Francis has loosened the dispensation that can be given to Catholics who have had an abortion; any old priest can do it.

Those, like Gibbons, who still care about abortion, are profoundly unfashionable, regarded as cranks. Perhaps that’s why she’s also probably the country’s most ignored serious criminal.

Yet.... are such people  - and I count my small presence amongst them - really just 'cranks?  Heck I can be cranky at times. It is the perogative of old men and Knights.  We stand for the defence of the most vulnerable and needy in the world. Babies.

How 'crank' is that?


But for a handful of people — unusually, the National Post was there to watch and Gibbons had several supporters on the sidelines — her arrest proceeded quietly and without fuss. 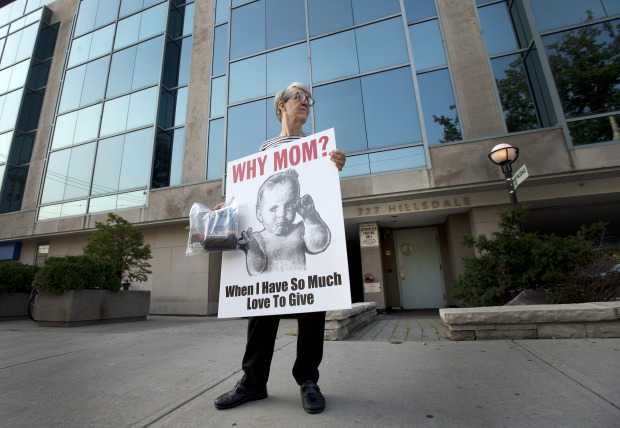 She arrived shortly before 9 a.m. She was wearing a striped sweater, black stretch pants and sturdy black walking shoes.

She was by herself.

Holding her sign — it’s always the same one, which features a cartoonish drawing of a chubby baby and reads, “Why mom? When I have so much love to give” — and in her hand a model of a 10-week-old fetus, she walked 13 steps on the public sidewalk in one direction, and 13 steps back.

The Morgentaler clinic, named after the late Dr. Henry Morgentaler, is located in a nondescript office building in North Toronto; the entrance is on a residential street.

There’s a veterinarian in the same building, and one client, her dogs barking out the car window, told Gibbons, “My dogs are telling you something — that women have a choice.”

The clinic, as its website notes, has “extensive security systems,” and within minutes of Gibbons’ arrival, there were three cars from the Garda security agency and three beefy fellows on the sidewalk with her. 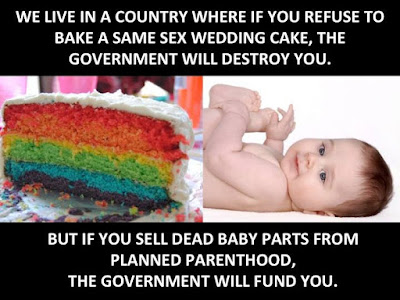 This injunction dates back to 1989, a different and difficult time in the history of abortion and Canadian clinics.

It was only a year after the Supreme Court had struck down Canada’s abortion law. Protests were often noisy and occasionally violent; in 1992, the original Morgentaler clinic on Harbord Street was firebombed.

Several individuals were named in that injunction, which was at first “temporary.” Gibbons wasn’t and isn’t one of them.

Yet about a decade later, when the court called the parties back to find out what was going on, the named individuals, ordinary people facing a potentially huge legal bill, agreed to settle the case, and the injunction was made permanent.

But egregiously, the order began to be interpreted by judges as applying to everyone — not just to the original named individuals who had consented to it, but to Gibbons and anyone else who dared come within 500 feet of the clinic.

When the sheriff showed up Wednesday to read the paperwork aloud three times, the forbidden conduct included “impeding, interfering with, blocking and obstructing” clinic patients; “distracting” or “attempting to distract” or otherwise “interrupting” the business of the clinic; “supporting or condoning” actions that might interrupt the business.

I think you’d be hard-pressed to conclude Gibbons did any of that.

She walked her solitary path in front of the entrance; she didn’t chant, sing, or pray; she didn’t stop anyone. The Garda guys were more of an impediment than this 67-year-old woman.

Gibbons didn’t reply but once, when she told the sheriff: “You arrest me while allowing the murder of babies? You have blood on your hands.”

She doesn’t speak to her jailers.

She never speaks in court, where for most of the past two decades, she has been unrepresented (she has had a lawyer for the past few years).

As she sees it, her silence honours the unborn. “The Supreme Court says the one you want to say you’re defending doesn’t exist … Nobody is there until the baby is born.”

“You arrest me while allowing the murder of babies? You have blood on your hands

She’s the definition of passive protest, or at least one of them. She is a deeply conventional person — from a sprawling, non-religious family, she has grown children and grandkids she adores and an elderly mum — who has ended up with this weird, unconventional life.

“Necessarily so,” she told me once.

She knew exactly what would happen Wednesday. She was prepared; she spent time with her mom this summer; she phoned a few friends the night before.

Yet she looked so alone in the back of that squad car. How is it that she can be so harshly punished simply for exercising freedom of expression?

Oh yes, because in this country, when people disapprove of what you say, they will criminalize the speech.

It’s not quite Voltaire, is it?

Linda is well known in the Prison where she has spent so much time. All of the women in the prison, who are in and out the revolving door system for all sorts of offences and many of whom who have had abortions in their past, know her and love her.

She is their friend and confidante, their succour and their 'minister'.

She does not waste her time bemoaning her sentences, She loves the ladies  as well as the babies.

She has done no wrong.

Linda is a Heroine.
Persecuted.

Linda is NOT alone.

“I’ve done nothing wrong,” the 41-year-old said during a brief appearance via video from a Milton jail to the Old City Hall Court in downtown Toronto. 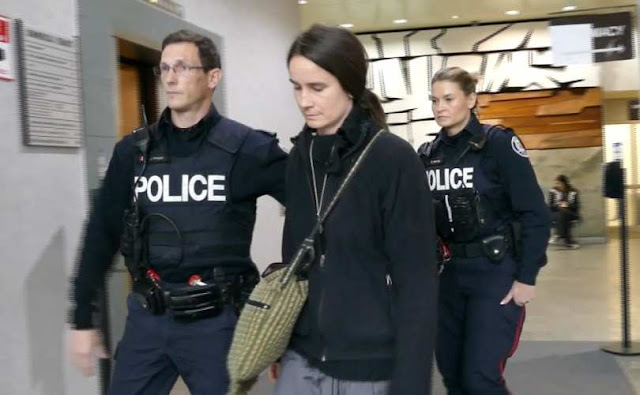 Wagner was arrested December 12 while trying to counsel women against abortion at Toronto’s Bloor West Village Women’s Clinic, located on the fourth floor of an office complex at 2425 Bloor Street West.

She is charged with two counts of failure to comply with a probation order, and one of causing mischief under $5,000.

Wagner refused bail in her three previous court appearances, and did so again December 23, because these mandate that she stay a certain distance away from abortion centers.


“I’d be very happy if you could release me” without having to sign a bail order, Wagner told the Court, but reiterated:

“I’ve made it clear I’m not prepared to sign any bail conditions.”

I salute these women.

Pax (and count yourselves very lucky that you lack her courage)