A Victoria Cross awarded posthumously to Corporal Cameron Baird is on display at the Australian War Memorial in Canberra.

The 32-year-old Special Forces commando was killed in action in Afghanistan in June last year.

He was shot during an assault on an insurgent-held compound in the village of Ghawchak.

During the battle he repeatedly drew fire on himself to give his fellow soldiers the chance to gain ground.

In February he became the 100th recipient of the Victoria Cross, the highest award presented for bravery during wartime. 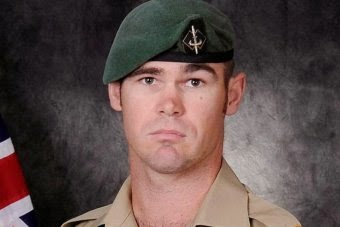 Corporal Baird's family decided to loan the medal to the Australian War Memorial to be displayed in the Hall of Valour alongside the three other Victoria Cross medals awarded for service in the Afghanistan conflict.

His father, Doug Baird, says it is an honour.

"To be viewed by the general population rather than be kept away in a dark little area I think probably it's a continuation of the story," he said.

The M4 rifle Corporal Baird used during his final battle has also been handed over to the memorial.

"It was about offensive spirit, the mental toughness and physical fortitude to persevere and overcome in the face of adversity. Mission first," he said.

"He was a humble man, he didn't seek glory but through his actions it was thrust upon him.

"He was adaptive. Cam was equally at ease training the Afghan security forces, or indeed sipping chai tea in an Afghan surah.

"It was about honour. A commando first, a commando for life, and then ultimately the selfless sacrifice that he made."

Colonel Shortt said the M4 carbine is symbolic of Corporal Baird's commitment to his team and the mission.

"Within his locker, he had a number of different quotes. One of those was...


'The bar should never stagnate, it should always be rising'.

"He was outcomes focused and he led his team from the front to achieve those outcomes."

All in the Tavern's bars rose to toast a fine man.

The Tavern will keep a tankard filled for the Rest of his mighty Soul.

The Tavern is grateful to Cherie for adding to the conversation. She said:


You asked so I will tell 

A number of years ago a colleague and I showed a couple of visitors from another department around the Weapons collection that was held at MoD Donnington.  One of the exhibits was a replica of the Victoria Cross metal.

After we had finished our visit we called in on the senior military officer who was OIC of the building where the museum was housed, in order to say thank you for allowing us to arrange the visit.  We got chatting with him and he asked if we would like to see the Victoria Cross metal.  Well there was only ONE answer to that question!  He then produced a locked box from within a locked cabinet in his office.  He showed us the fragment of metal and pointed out the smooth side where the metal had been sliced to send for casting.  He explained that a portion is always kept ready the jewellers, so they can start work on a medal when it is needed.

The security of the metal seems to have stepped up a bit since those good old days ;-)

The weapons collection has now been moved from Donnington and is available for public viewing:
http://www.cmsm.co.uk/donnington.php

In my early days at work the piece of VC gun metal had a Nato Stock Number (NSN) and was part of the weapons inventory in the storehouse.  The VC gun metal was stored and locked in a secure cage along with other attractive items…

The following link refers to a stock record card, that is how the stores were accounted for before the advent of computers (the army were well behind the curve introducing computers into regular use).
http://www.raaoc.com/?q=node/63

I think the picture in the link is showing the replica as it was displayed in the museum at Donnington.   The cut portion of the metal is to the rear.

Then later as I mentioned below the gun metal was moved from the stores inventory (and stores location) and kept under lock and two keys by an Army officer.

Somehow you (often) seem to  have the knack of getting me reminiscing ;-)

The Victoria Cross is the highest Award for valour in the World. No other medal comes close. The rank of the recipient does not affect the status conferred.


Wiki says: On 29 January 1856, Queen Victoria signed the Royal Warrant that officially instituted the Victoria Cross. The Warrant was backdated to 1854 to recognise acts of valour committed during the Crimean War.

It was originally intended that the Victoria Crosses would be cast from the bronze cascabels of two cannon that were captured from the Russians at the Siege of Sevastopol.

However, historian John Glanfield has proven, through the use of X-rays of older Victoria Crosses, that the metal used for the Victoria Crosses is in fact from antique Chinese guns, and not of Russian origin

The barrels of the cannon used to cast the medals are stationed outside the Officers' Mess, at the Royal Artillery Barracks at Woolwich. The remaining portion of the only remaining cascabel, weighing 10 kilograms (358 oz), is stored in a vault maintained by 15 Regiment, Royal Logistic Corps at Donnington, Telford, and can be removed only under armed guard.

It is estimated that 80 to 85 more Victoria Crosses could be cast from this source.

A single company of jewellers, Hancocks of London, established in 1849, has been responsible for the production of every medal since its inception.


Both the Australian and New Zealand Victoria Crosses are made from the same gunmetal as the originals.


Oz is a small population. 100 VCs is astounding.