Updated.
We don't get much hate-speech in the Tavern. But that will not stop the stupid hordes in Hilary's Village down the hill condemning folks here for acknowledging tried and tested, old-fashioned, hard-won values.

Here folks drink deep of Grace and seek forgiveness for their own failings and those souls out there.

It is fashionable these days to nail and glue ....

....to banners and carry it through the streets.

It is fashionable to claim to Love, when in fact it is Lust that drives.

But we refuse to play that nasty game.

And nasty it is.

It is fashionable to not simply overturn our society but even to overturn the meaning of words.

The other day a CEO of an internet company 'lost' his job at the demand of 'compassionate' homosexuals who 'love' and want to enjoy their 'love' free from objection.

But the Homosexual lobby have no idea what Love is. They steal the word and apply it to their own perversion.

They howled for his dismissal. Threatened his company.

My good mate Bernard had some reasoned words to say about the matter. Bernie is a psychologist who is just as measured and concerned as any patron in the Tavern.

https://www.youtube.com/watch?v=6ELdIBnA6qA
Update
Dennis had a few words too: He sees the 'Hate' as a 'general' Leftist feature.

During the 2012 presidential campaign, when the left attempted to destroy Chick-Fil-A for its owner's views on same-sex marriage, I suggested on my radio show that the Republican candidate, Mitt Romney, stand in front of a Chick-Fil-A restaurant while enjoying some Ben and Jerry's ice cream.

In that way, I argued, he could show one of the

great moral differences between the right and the left.

Though Ben and Jerry are leftists, we conservatives do not believe that company owners' views should matter to consumers. We believe that products should speak for themselves. If the ice cream is good, despite whatever repugnance we might feel regarding the views of the makers of that ice cream, we will still purchase it.

The left does not see things that way. The left is out to crush individuals and companies with whom it differs. This is especially so today on the issue of same-sex marriage.

Perhaps the most dramatic example of this took place last week. The governing board of the widely used browser, Firefox, forced the company's CEO, Brendan Eich, to resign.

The Firefox board had learned that in 2008, Eich donated $1,000 to the Proposition 8 campaign in California. Proposition 8 amended the California Constitution to define marriage as the union of one man and one woman. In classic Communist fashion, gay rights organizations demanded that Eich publicly recant. When Eich did not, gay rights and other leftist organizations called for a boycott of Firefox. Firefox immediately forced Eich out.

All these years, the left, after coining the term "McCarthyism" in order to disparage the right, had fooled most people into believing that it is the right that suppresses liberty.

The truth, of course, has been the opposite. Worldwide, with the exception of Nazi Germany (which was a uniquely race-based totalitarianism, neither left nor right -- while it rejected Marxist class-based struggle, it supported socialism ("Nazism" was short for National Socialism),

every genocidal totalitarian regime of the 20th century was leftist.

And domestically, too, the left has much less interest in liberty than in forcing people to act in accord with its values.

A totalitarian streak is part of the left's DNA.

How you think matters and what you do away outside of work matters: More than 20 states prohibit judges from being leaders in the Boy Scouts -- because the left deems the Boy Scouts homophobic.

Bakers and flower arrangers and Bed & Breakfast proprietors are driven into Courts and out of business by 'compassionate', loving', 'gay' people who exhibit anything but Gayness or love or compassion. Their victims are hauled before an engineered 'Public Opinion' replete with smears and vicious condemnation simply for exercising a choice not to contribute to a 'gay marriage' 'ceremony'. 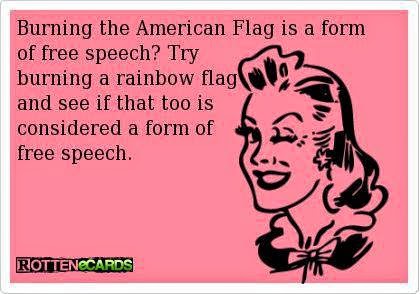 Hate speech legislations are rammed through Parliaments and Congresses to limit free speech that 'offend' the wicked, the corrupt and the con artists, but not it seems to be applied to destructive speech that ruins good people's lives and livelihoods.

In Oz the good folk who years ago tried hard, at great personal expense, to give safety and hygiene to distressed, neglected and abused Aboriginal children have been condemned by faux-compassionate villagers and accused of engineering a 'Stolen Generation'. Even of genocide. Their efforts are deliberately misinterpreted in order that the deceivers get 'Compensation'. White is a Blight to the real haters.

Good people speak out against the murder of babies in the womb. They Love Life. They value humanity. So they are forbidden' by legislations and threats of jailing and huge fines, brought in by people who claim 'freedom of choice'.  No choice for the babies. No choice of opinion. The Good people are labelled as 'Hating Women's Rights', even of 'Hating Women'.

Good people speak out against the destruction of Marriage; that noble Institution that recognises, acknowledges and Honours the love between a male and a female and their sole ability to bring forth new life and nurture the new human being.  Such good and normal people are condemned and vilified. They are called homophobic.

Prominent Feminist nonebrities can hold forth on our televisions demeaning and dismissing 'White, Male Heterosexuals' and blaming them for all the ills of the world. They can call for men to be reduced to 10% of the population. They can 'Twitter' with a hashtag #killallmen.

THAT is hate Speech.

The faux-compassionate can condemn a Government Minister who stops a disgusting trade in human trafficking that leads to people drowning at sea.  Those same faux-compassionate agitators can call for the reintroduction of the old policies that not only drowned over 1000 people but attracted many more 'drowning-fodder' for them to wail over. They call his policy 'Evil'. They call for him to be sacked.

It 'loves', in the same way that the faux-compassionates, the homosexuals, the Radical screeching Feminists, the  'Black-armband' compensation demanders, the 'asylum-seeker' 'supporters' who revel in the drownings, 'love'.

It is NOT love.

It 'loves' to distort and destroy and blame; to lie and twist and condemn; to take people's jobs and livelihoods.

It is anything BUT love.

I will let RamzPaul have a last parodying word to see who is next to be fired. You can guess..... it may well be YOU.


The Princess of Lies strides and struts in our world, suborning souls, destroying reputations and lives.

The Good can Pray for them.

Drink deep of Courage and Fortitude.