Here's a question for you. What do you reckon of my chances if I went into my Bank (which bank, you might well ask) and asked to borrow, ooh, say Oz$ 10,000,000? I could offer the Tavern as collateral.  And when asked what for I could say I was going to give it to some fat-cat bureaucrats in some other country to spend on his/her salary and the salaries of many more, including some beareded wastrels in some of their universities so they could charter a ship to go to the Antarctic to study global warming.

Not a hope you might answer. I have not been preselected by a bunch of political backroomers and elected by bearded wastrels in universities. If I had been, there would be no problem. The bank might even bag it for me. Brown paper bag.

Of course, I could explain that I wanted to launder much of it through a casino - and there is one not far from my bank branch. My bank (which one again) is adept at facilitating laundering. They are so good at it that they have even made the evening news !  That might count in my favour when the 'fees' are taken into consideration.

I shall let you follow the money on that one. Hot money needs cooling down.

But the clincher would be the global warming scam. I just might swing it. Even better were I an elected member of the Oz Gummunt.

The liklihood of actually getting some bearded wastrels to Antarctica is slight though, as all too often they are turned back by great chunks of ice.

A dirt great chunk of ice scared the living daylights out of Uni-warmints across the globe.

Jo dropped by to help us appreciate the humour.


There have been far bigger Antarctic icebergs

than the latest A68 Larson C berg


CNN is  “freaking out” about the latest large iceberg. But John Sutter doesn’t mention that there was an iceberg twice its size in the year 2000 which was 11,000km2, and that as long ago as 1967, two other icebergs of a similar size were recorded. Thanks to John McLean for the links. 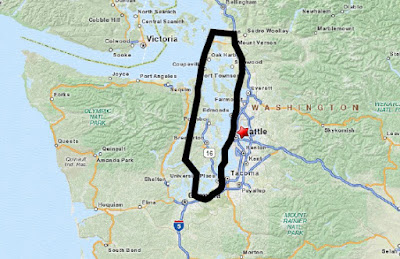 
When it comes to long term trends in iceberg sizes, the only scientific answer is “who knows”. Satellite records are so short, if a bigger iceberg broke off in say, 1811, how the heck would we find out? Not much is left of an iceberg 100 years later. What kind of proxy could show it ever existed — ancient stone carvings of satellite pics from ancient Greece? 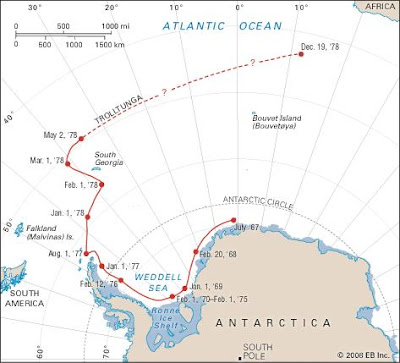 Apparently the smaller of these two was called “Trolltunga” and floated around til 1978. Sadly, the real Trolltunga was pre-youtube, no photos I can find, except of the region in question.

If I read this correctly, we are talking about ice that takes a century or even 2,000 years to go from the “grounding line” to the front. The Grounding line is the last point that the ice sheet touches land. The part beyond that is hanging out over the ocean:


We were mainly interested in the differences of residence times dependent on the density of surface patterns on the 15 km strip along the ice front. In case of very dense patterns we found that the ice needs between 78 and 968 years to move from the grounding line to the ice front. For less dense patterns we obtained a range between 140 and 2,764 years. — Wesche 2013


In Table 3 of Wesche, there are ten potential calving fronts greater than 200km wide spread over four sectors of Antarctica. It’s just a matter of time before another big berg breaks off.

This is the Trolltunga region. The little iceberg on the left is not “Trolltunga 1967″ which was around 45km  x 100km.


For the curious, Encycploedia Britannica  has this map and path of Trolltunga, (see above a bit) which bounced around near the Antarctic coast for years before heading into the Atlantic Ocean, where it still took a year to melt. Strangely Encyclopedia Britannica has no article any more. 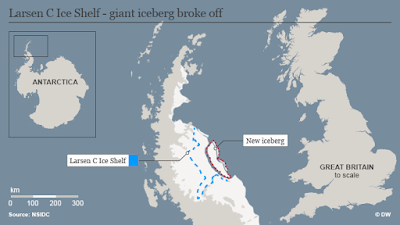 And in other unrelated but curious news, apparently Winston Churchill was considering using an iceberg as an aircraft carrier in WWII.

Of course 'we' have to send ship-loads of 'scientists'  to take a look, joining the other scientists already there with their vehicles and architecturally spiffing buildings, and heaters and engines and planes and helicopters. All heating the place up.

But the ships get stuck in the ice, don't they.

NASA Confirms Falling Sea Levels For Two Years Amidst Media Blackout
http://www.zerohedge.com/news/2017-07-27/nasa-confirms-falling-sea-levels-two-years-amidst-media-blackout
Back to the drawing board fellows. Better get another 'grant' of money borrowed from a profligate and in-debt Gummunt

Have a drink. I can pop an ice cube in for you.

There's plenty to go around.