It is astonishing what a cheeky grin and an easy manner can achieve. I have decided to ask my chef to order some Reggae Reggae Sauce to spice up our upcoming Spring and Summer menu. It is hot stuff, I am told, and comes from (originally) Mr Levi Root's mum's kitchen. 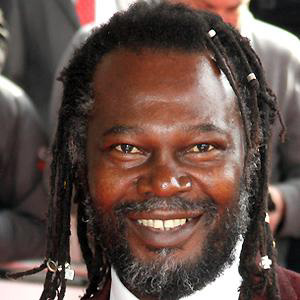 It turned out that it didn't actually, and Levi's short burst onto the famous Dragon's Den program soon saw most of his claims carved up like a gently savaged fox set upon by hounds. Nevertheless.

One is often astounded by the sheer cheek of some people. In this case a very cheeky chappy, but one who soon had some powerful mates.  The Dragon's Den is a TV show in which chaps like Levi can 'make a pitch' for some cash and partners for their quite often bizarre business ideas. 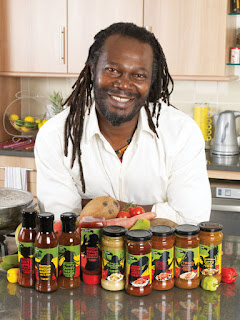 I'll find the show for you, showing Levi, and let you see it soon.

Dragons' Den investor Peter Jones has since classified the product as ...

one of his most successful investments from the show.

Levi stood and announced that he had in his pocket an order for two and a half Million litres of his sauce from a major buyer.  It was bullshit. Well, not really.  Not really truely deceptive bullshit. Other claims were though. The millions of litres was just a error of maths: and a mistaken commitment. It was quickly savaged. But, as I said, gently.  It isn't as though he lied like a Dickie Mint Trim Sheet.

Here, watch the whole thing.  It is really quite funny while being deadly serious. One almost feels sorry for Levi (his real name, by the way, is Keith)


Levi's appearance on Dragons' Den On 7 February 2007, indeed his entire presentation, demeanour, charm and cheekiness convinced Peter Jones and Richard Farleigh to invest £50,000 in return for 40% of his company. It was not quite what he wanted, but then clear vision did not seem to be his forte.  Luck walked into the Den with him.

The sauce gained fame as a result of his memorable television appearance and on 9 February, Sainsbury's were confirmed to be interested in stocking it. On 7 March, the sauce went on sale nationwide.

The product's catch line is "Put some music in your food". Levi Roots released an accompanying single of his "Reggae Reggae Sauce Song" which he sang whilst pitching his product on Dragons' Den, and also on Harry Hill's TV Burp. The song was released as a download with proceeds going to Comic Relief. In September 2008, Reggae Reggae Sauce was voted as a CoolBrand by a panel of experts and the British public.

The origin of the recipe was disputed by Tony Bailey, who runs a West Indian takeaway in Brixton, South London;

"The recipe is mine. People round here know, but we don’t say."

In 2010, Bailey filed a preliminary claim in the High Court for more than £300,000 claiming that, as the inventor of the sauce, he was entitled to a share of profits.

Roots ran a jerk chicken stall at the Notting Hill Carnival for 15 years with Bailey. Levi Roots gave evidence to the High Court and admitted that previous claims made by him on Dragons Den and in marketing for his product, including the claim that the recipe was his grandmother's, were untrue.

However, Judge Mark Pelling QC dismissed Mr Bailey's claims for breach of contract and breach of confidence. He told the court: "This was a dishonest claim, dishonestly advanced." No solid evidence had been offered to support Mr Bailey's claim that he was the original inventor of the sauce. Lawyers said they estimated the legal battle had cost more than £1m in total and the judge said Mr Roots was entitled to have his costs paid.

Talk about falling on your feet.

I am pretty sure the Judge was not bribed with a lifetime supply of Reggae Reggae Sauce, but ........

Reggae Reggae Sauce is manufactured by AB World Foods, a division of Associated British Foods and despite Levi saying he wanted production of his sauce to continue in the UK, production moved from Wales to Poland in March 2007.

Initially the sauce was carried exclusively in Sainsbury's supermarkets but now many supermarkets in the UK and Ireland stock the sauce. A follow-up episode of Dragons' Den, aired on 18 July 2007, revealed that Sainsbury's had expected the sauce to sell 50,000 bottles in its first year. 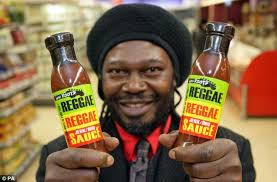 In the summer of 2010, snacks were added to the range of products with the launch of Reggae Reggae Peanuts and Cashews. These peanuts are covered in the original Reggae Reggae Sauce and seasonings. Subsequently a range of Reggae Reggae flavoured Caribbean ready meals was launched.

In September 2010, Morrisons supermarket announced it would be carrying a range of Levi Roots sandwiches.

In April 2011, Domino's Pizza in the UK launched a limited edition "Reggae Reggae Pizza", a combination of toppings with the Reggae Reggae sauce. In 2012 KFC launched a reggae reggae box meal.

The range has expanded into other areas such as Levi Roots Jamaica Ginger Cake and Levi Roots Caribbean Crush drink which is sold in mainstream UKsupermarkets.


In 2012, a new "Mild" variant of the sauce was released. A new advert was made at the same time.

So, there you go. Telling great fat porkie pies on TV can convince even the rich and famous.

I hear  it goes well with pork pies.

Try some, and have a long cool drink to wash it down.

And if you go into business, get some sound business acumen alongside to keep you honest. Well, a little bit anyway.

Email ThisBlogThis!Share to TwitterShare to FacebookShare to Pinterest
Labels: Restaurant