Christmas Music: The Singer and the Song

My friend James, this time of the year, drops off his 'play-list' for Christmas.  He leaves it behind the bar for me to ponder and he plays one every day until Christmas over at his place. You can take a look and have a listen here >>>>

It gives me time to ponder. And ponder I do.  Down in the Crypt. I have my own favourites and he even asks for them, sometimes being gracious enough to add one or two of mine to his. I am not the only one so favoured of course. 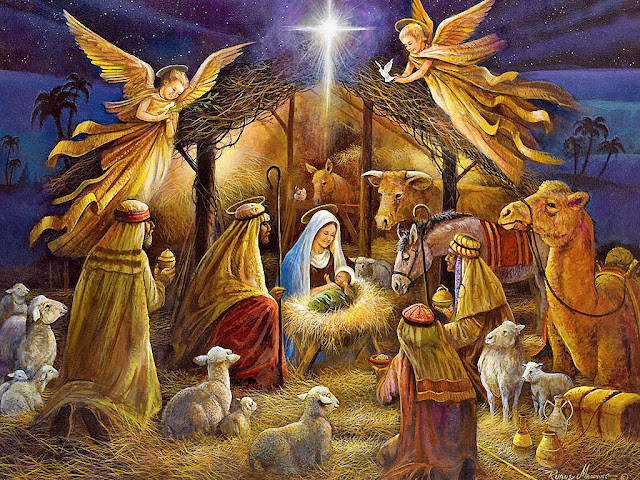 Most people have lost sight of Christmas. What it is really all about: the Perfect human - God made flesh -  born to a virtually perfect mother, in order to bring Love and Saving Grace to we very imperfect humans. And some of those make fine Christmas music despite their imperfections.

I am reminded of Anaclito and the Priest. The dying bandit lied to the dying priest because he respected the 'Singer, not the Song'.  That was even the name of the film. There are many who do not even listen to the song, let alone respect the singer.

Christ came to Love and Save both.

And so those who sing His praises and welcome Him on His birthday, may be flawed human beings, and like all of us, in need of the gifts He brings while singing of Three Kings who bring gifts to Him. Children, perhaps no less so, but at least they have not yet clocked up so many errors as you and me.

I make a habit of praying each day. I do not say this to boast or seem holier than my customers. I am in greater need than most. Old men have done much and mostly imperfectly. But I state what I believe.

OK, Not all that 'Christmassy', so let us move on. Many will know the song and remember the singer.

Yes, He came for her too. She started out such a nice girl, singing in church, but Charlotte was dragged down by the entertainment industry's vipers. There is hope for her yet, as for all of us. Perhaps she can recall the Singer some day. Even rude, nasty girls started out near perfect. I pray she recovers fidelity.

Being an old Latin man (although I claim little or no facility for even that old language) I do recall getting all the words of this right when as a lad I had a voice for it. But let us hear a Master at it.

It ain't over even when the fat man has sung. We move on.

Here in the South we often miss the North's snow. There are quintessentially 'Anglophile' elements to Christmas. Holly and Ivy for instance.

And talking of little girls who exhibit that innocence with which they came, and sometimes lose,  a particular favourite of mine is Jackie Evancho. I hoped at the time she first 'appeared' in public that she could escape the clutches of the Industry, but it seems the attacks on purity have been aimed at her family. The world, the flesh and the Devil are hard to resist, and Jackie's brother has been taken by the 'transgender' virus'. Still, she does sing the song. In the silence of the night, I hope she - and he - can still hear the Word.

Now this young woman, Jamie Finch .... I have no idea of her progress, but I like to hear her every year. To me this is the very best version I have had the pleasure of playing.

Of course, good music can be taken to the streets.

But, enough. There are many evocative songs you might like to here. I can add them if you tell me.

Meanwhile Perhaps you might remind yourselves of the Fidelity and Generosity of even flawed men by watching the end of Anaclito and the Priest, 'In Persona Christi'.