Fathers' Day and the Weasels Play

Additional copy below.
Pop, Da, Daddy, Father, the Ol' Man, yes, we have had a special day, once a year for him for a while now.  We celebrated  him.  For Generations it was Mum and Dad: both had their special days. Once upon a time we all had one of each to call our own but now Fathers are on the nose in 'official' circles. There are special 'family courts' full of weasels to throw him to the curb. Passports and Birth Certificates avoid mentioning his status as a Dad, preferring 'Parent B'. Even mums are losing out - Parent A.

These days Dads are demeaned, disdained, denigrated and dismissed, by the weasels in the media, the governments, in Education and the Law. 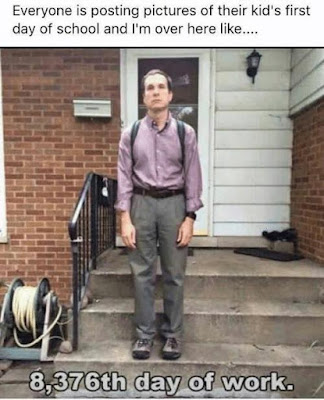 But here in the Tavern  where weasels fear to tread we have not lost Hope, nor the Honour accorded to Fathers.

So we raise our glasses to say,

"Thanks Dad"
to all Fathers  inside the bars and out there beyond the hedge where they are doing it hard.

Dads sacrifice a huge amount for their kiddies. Huge.

And may I say that it is high time that fathers, mothers, uncles and aunts gathered around and stood up to the forces of modernism: stood up and told the weasely feminists, homosexuals, the socialists and greens to take a hike into the bush; stood up and said 'enough is enough you friggin' weasels' to those who are trying so hard to destroy Family and its traditional composition of Mum, Dad and children. 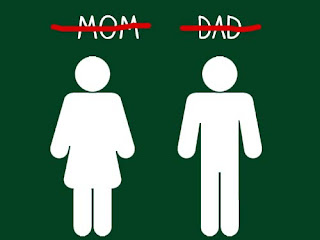 If it was not too enough to treat fathers as either stupid or dangerous and suffer the constant snide sniping at dads by the weasel-women's pages of every newspaper, we now have a concerted effort to have two non-dads and two non-mums be the 'family', and buy, borrow of steal children from real parents, all in the name of some perverted version of 'Equality'.

Do NOT let the weasels rule.

In the few days running up to Fathers Day, Dads4kids produced their usual annual celebration of fatherhood TV advert.  Here it is. I think it is a beautiful advert showcasing ordinary everyday dads. 30 seconds of kindness, loving dads, and happy children.


But it was BANNED by Weasels as 'too political'.

By the Lord Harry it showed a baby in the womb, its little heart beating with excitement: HORROR. Trigger Warning !

It showed smiling mums and smiling dads and smiling kiddies: HORROR. It will upset Homosexuals. TRIGGER Warning. Get the Safe -Space ready.

It showed a girl getting married. 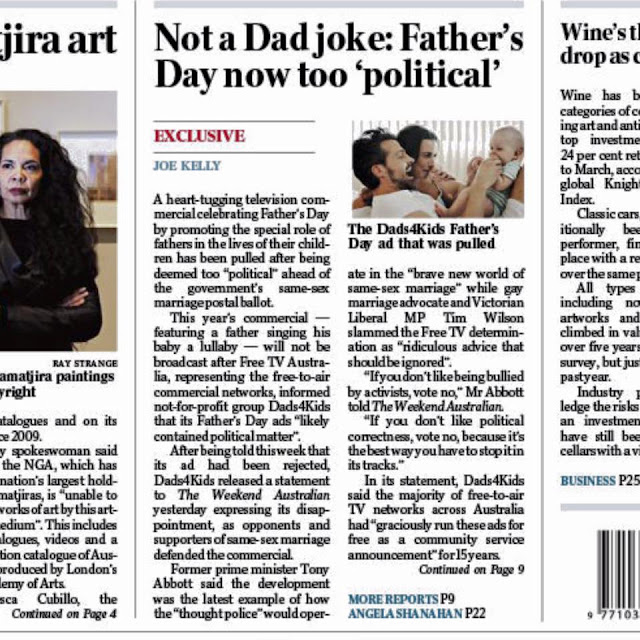 Ben Pratt from Dads4kids had this to say:

Every year for the last 15 years, Dads4Kids has celebrated Father's Day with a total of 13 different television campaigns focused on the special role of a father with his kids.


The majority of free to air TV networks across Australia have graciously run these ads for free as a Community Service Announcement (CSAs) up until now. These television commercials are simply a gentle encouragement to Australian dads, and an affirmation that they are an important figure in the lives of their children. 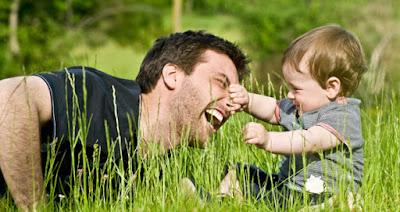 The adverts have been enthusiastically accepted and many TV stations play them all year long as a community service. They are always released in the lead up to Father's Day.


Unfortunately, what is a simple Father's Day message has now become a "political" statement.


It is extraordinary that this is where we have come to as a country; we can no longer celebrate Father's Day without being forced to look at it through the lens of the same-sex marriage debate.


It's a tragedy that a political motive is now implied in any mention of fatherhood.


Not everything is about same-sex marriage. 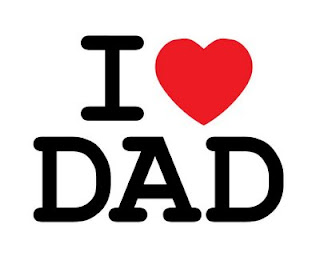 There are lots of dads out there who, while they may be doing it tough, are doing their best for their kids, and the team at Dads4Kids wants to honour and encourage dads to put their families and children first.


We expect that in speaking up about this that we and those connected to us will be attacked and intimidated, and subject to the same vilification in both mainstream and social media that has been meted out to those who have stuck their head above the parapet on same-sex marriage, despite this not being the purpose of our adverts.


To be clear, it was and is not our intention to enter this debate at this time through these advertisements. 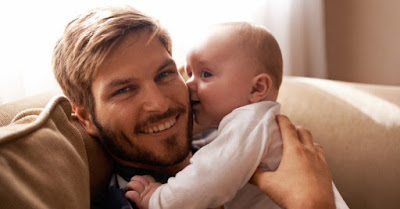 And what, you might ask, is in these "political" adverts? They feature a father singing a lullaby to his baby. It is that simple.


Our advert has been inspired by other adverts that support and encourage mothers and families. Please view the 30 second advert above and decide for yourself. 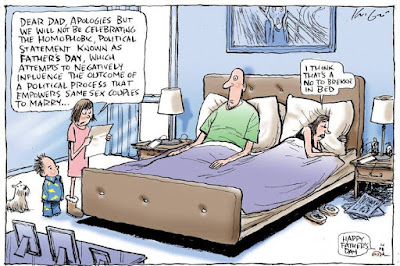 Regardless, we have taken the preventative step of restricting access to our website and social media channels in order to protect ourselves and our families from expected response to our situation.


We all know what he means.  Their website has closed down and their Facebook page too.  The hater-haters, the 'lerve' lovers, all the nasty buggers have well known habits that show their  idea of 'equality' and 'tolerance'.

We apologise to those who regularly visit our website and engage with us via social media for the inconvenience, but we trust you will understand and thank you for your support.

The weasels are taking over.

Late in, from Rachel Baxendale:

However, the peak body for free-to-air commercial TV networks blamed the ad’s creator, not-for-profit group Dads4Kids, for the ad not running, saying they were asked to add an identification tag declaring political content and refused to do so.

Dads4Kids spokesman Ben Pratt said the organisation had run similar ads for the past 15 years without them being classed as political. He said the political classification meant the ads could not be played for free under Community Service Announcement regulations, and Dads4Kids could therefore not afford to run them as it had done since 2002.

like political ­correctness, vote no, because it’s the best way you have to stop it in its tracks.”

Media reports cited mention in the ad of the dads4kids.org.au website as the reason Free TV deemed it political, given the page, which has since been taken offline, suggested every child had a right to a mother and a father.

In a 2014 submission to a Senate inquiry about recognition of same-sex marriage, Dads4Kids argued such relationships were a “a blatant attack on the rights of the children of Australia”.

Mr Pratt said these issues were at no stage raised with Dads4Kids, nor did Free TV provide such details to The Australian on Friday when asked to respond to several questions about what the political content in the ad was.

For Brisbane dad Heitor De Morais, Father’s Day yesterday was about spending time with his wife, Helen, and their 10-month-old daughter Sophia.

“It’s a day to celebrate fatherhood and to remind you of how lucky you are to be able to pass on all your knowledge and experience to your offspring,” he said.

Mr De Morais, a supporter of same-sex marriage, said he could not see what the issue had to do with Father’s Day.

“I don’t think Father’s Day should be politicised,” he said. “Same-sex marriage is a different issue, which should be dealt with respectfully.”

“This decision is manifestly stupid and I hope it will be reconsidered,” he said.

One Nation senator Pauline Hanson said attacks on special days such as Father’s Day and Australia Day were a distraction from important issues such as energy prices.

“To have (the ad) declared ‘political matter’ at a time that just so happens to cross over during the same sex relationship debate is just garbage,” she said.

“The Australian people expect both sides to play by the rules here, and that includes proper authorisation,” he said.

Labor equality spokeswoman Terri Butler said she had not seen the ad when asked whether she agreed with the determination that it was political.

Free TV Australia said reports it had blocked or banned the ad were incorrect.


Have a drink if you need some dutch courage.

Then go to it.