Eras have a mood, a feeling, a sense, and the second decade of the 21C is marked by contempt. It is an unpleasant mode and few reasonable people like it, but it is a human response to that which is contemptible. And we find the contemptible all around us, outside the Tavern's hedges.  There was a lot of muttering inside the Tavern today. Look at the definition: 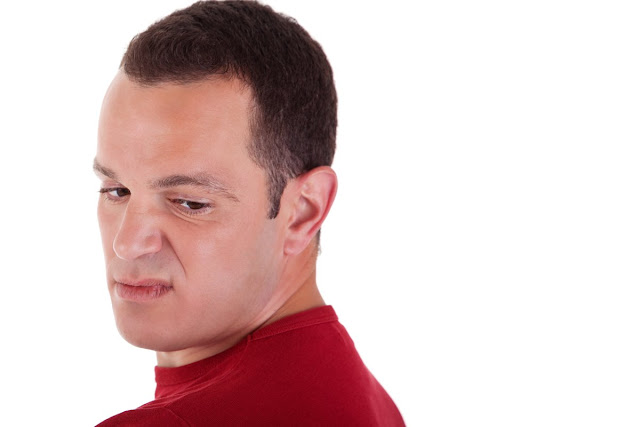 Contempt: disdain, scorn imply strong feelings of disapproval and aversion toward what seems base, mean, or worthless. Contempt is disapproval tinged with disgust: 1350 1400; Middle English (< Anglo-French) < Latin contemptus a slighting, equivalent to contemn(ere) to despise, scorn.


Incite: encourage or stir up (violent or unlawful behaviour). from M.Fr. enciter (14c.),from L. incitare "to put into rapid motion,urge, encourage, stimulate," from in- "on"+ citare "move, excite".

It is all the fashion these days to incite contempt but very few are punished for it. Only the reasonable it seems. Certainly not those who deserve punishment. One does not even have to intend to 'stir up' 'violent' or 'unlawful' behaviour. Simply pointing out the violent and unlawful behaviour of 'some sections' of our multicultural society is enough. 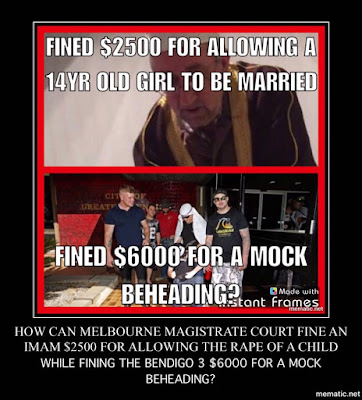 A couple of fellows were hauled into Court this week, charged with inciting contempt. They had beheaded a manniquin while dressed in middle-east fashion.

Someone else, say a 'Performance Artiste' doing something similar dressed like French Revolution soldiers would have perhaps an art critic to make some comment but not a car full of cops to haul their sorry arses into Court.

Meanwhile an Immam in another locale was fined $2500 for presiding at the rape of a 14 year old girl. Rape.

Who do you think I find contemptible?

The Judges, that's who. The court system. Oh, yes, and muslim beheaders and child rapists too, of course.

The Courts in Oz incite contempt for the Law and itself. 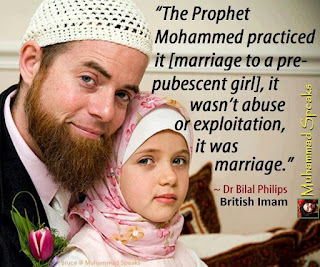 One cannot criticise Muslims in Oz. Yet it is they themselves incite contempt for their ways. It is they that do, say, extol and demand the contemptible things that bring out from reasonable people the entirely human and somewhat civilised feelings and sense of disdain, disgust, revulsion etc.

Pointing this out, however, is considered inciting contempt. 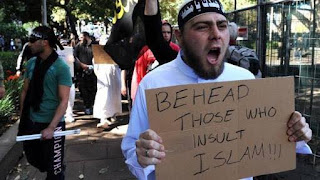 A muslim can walk the streets carrying a sign demanding the beheading of people and get a police escort so that no-one 'incites contempt' against him.

The Muslims bring on the contempt the deserve.


They bring upon themselves the contempt they incite. 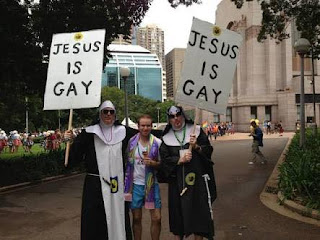 The homosexual mobs in Oz sneer at, disdain, and stir up anti-marriage actions. We have seen a car bomb and the posting of 'powders' in the mail to a pro-marriage group. Do not hold your beath waiting for charges of inciting contempt being laid against the perpetrators. The SSM Mob are rewarded with a vote.

They too dress up to mock and sneer at those who hold marriage in high regard, even sacred.  No cops descend upon them,  bang them up and drag their drag-act arses to court. No. They get a taxpayer funded parade.

Civic councillors, State Representatives and even Federal Government Ministers hand over vast sums of public monies to them. Even Generals order soldiers to march in the streets with the depraved and contemptuous perverts.

The Legal system appertaining to 'Families' and Children, Domestic Violence hold their proceeding in secret. It is so biased against men and fathers that it beggars belief. It is contemptible.

Our schools are swamped by child-abusing academics and an almost total female-dominated workforce that impose transgender horrors on even small children. 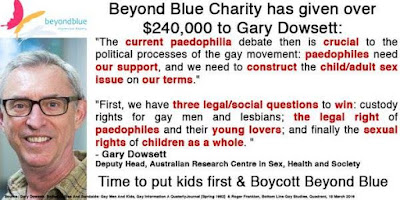 While fathers are driven away from their children and mothers derided and dismissed in the education of their children, we find an ex-Prime Minister, the first female in the job now heading up a charity that supposedly deals with depression and suicide.

And what does she do? She gives a small fortune to the very academic wrecker responsible for and behind the ruination of marriage and the subborning of our children.

She and her ilk incite contempt.

But do not expect the cops to call on her. 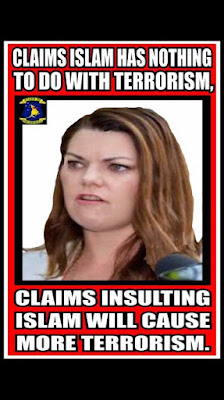 And just look at our Political 'elites'. The quality of many, from Prime Ministerial back-stabbers, disloyal even to their own parties, downwards through the Ministers who funnel public monies to corrupt colleagues overseas, and onward down to the back-benchers and ultimately leading down the general quality of the outlying politicians.

Can anyone get lower in intelligence and passion, base and slimey as they are, than our very own SHY. Her IQ, were it a temperature, would suit a fridge.

She and the whole shebang at Federal and State level (with a very few exceptions) bring the entire political system into disrepute and incites contempt in the general population (other than their maaaaates). 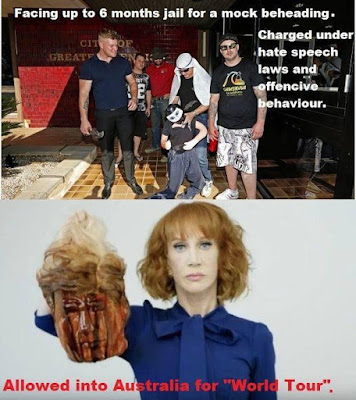 I cannot let the churches off either. A small number of contemptible priests abused children several decades ago. Contemptible Bishops covered for them. Their actions and even their excuses incite contempt.

Someone mentioned performance artists. A woman can put forward an unmade and soiled bed and call it art. She is more stupid than contemptible. But the Gallery that displays it is contemptible.

More, it incites contempt for art itself.

How about a 'comedienne' who 'performance arts' a beheading of a Politican. She gets entry into Oz, while a gentleman who wishes to talk about the curse of abortion is immediately arrested when he sets foot in Melbourne and deported the next day. 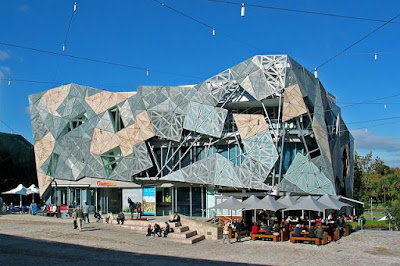 The  Entertainment
Industry is contemptible.

Our  modern architecture is not simply dismal, harsh and soul destroying but contemptible.

What a mode for a society.

Just considering it and taking quietly about it in the bars puts a nasty taste in a chap's mouth.

Must wash it away with a fine drink.