All PhDs are the same. Cutting edge stuff is the bread and butter of the PhD. The people who gain them are 'Top of the Range'. We get lots in the Tavern.

Some earn by their bread by breaking new ground in Physics or Medicine, Engineering or Womyn's Studies. We don't get many of the last lot in here though.  We have a University at the bottom of the Mountain in Hillary's Village and our 'young people' are encouraged to go there. The State provides cash for the lecturers and cattle trucks for the students, although the students have to take out loans for the fare.

We get lots of pretty girls up here too. Many are students; some from Japan. They are noticeable from their colourful, non-traditional costumes. They usually find their way here after having a few sticky buns at Ross, up-Island from here.

One of our State-of-the -Art PhDs has written a thesis about them. But it was young Emma Hope who dropped in to explain all the stangely dressed gals in the bar, cluching their BYO cakes.

It was Dr Craig Norris who wrote his ground breaking work. He specialises in media, popular culture, and globalisation with a focus on Japan and Australia. His current research interests, apparantly, include media tourism and fan pilgrimages, video games, and cosplay which relates to his earlier research on the cross-cultural appropriation and spread of manga and anime (Japanese comic books and animation) in Australia.

These are vitally important in our multicultural, multi-age age.
?
Craig teaches subjects which cover a variety of qualitative and quantitative approaches to media and culture, including case studies from youth media, cult media, and Japanese popular culture as well as honours level seminars in media theory, methods, and current issues.

Worth the cattle trucks and debt, I'm sure.

Wouldn't you, as a parent, just really want to spend your hard earned income on sending your kids to study with Craig?  Craig's case study included some of my customers.

On the other hand, Kirsty Lloyd-Bostock and Carl Crosby run a bakery. No PhD needed and the cost to customers is far and away less. They tell me:


We're in the heart of Tasmania's finest Heritage Village.
We're a comfortable 1830's coaching inn with creaking stairs, cosy bedrooms with en suites and a log fire in the guest lounge.
You can wake to the smell of fresh bread from our own wood-fired oven.
We serve a unique bakery breakfast, with hot bread, croissants and pastries straight from the oven to your table. Don't worry if you can't eat it all - you can take it away for your morning tea.
Ross Village is the best ½ way stopping point between Hobart and Launceston, and only one hour's easy drive to the East Coast.

All sound great to me. I might outsource some of our fine dining needs to them.

The Ross village Bakery is Ross' original bakery and has been operating on the site for over 100 years. The wood-fired oven is a unique piece of colonial history - a traditional semi-scotch brick "3 bag oven" - with the capacity to bake 300 loaves at a time. 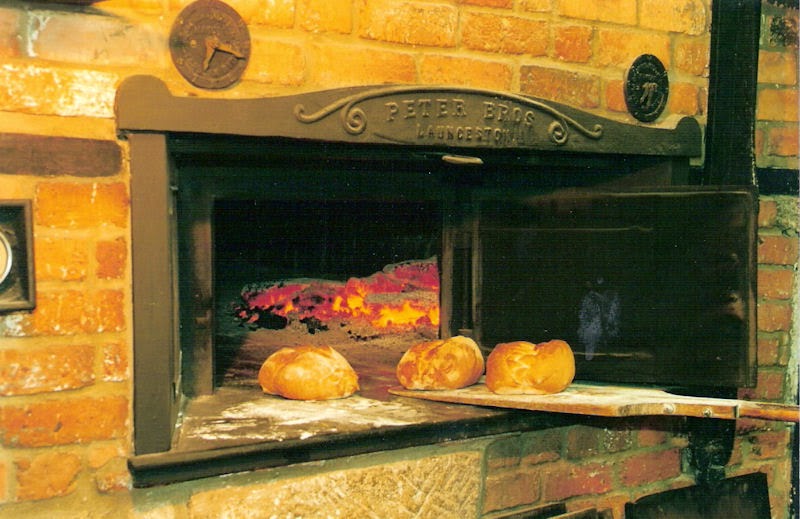 They take the oven temperature up to over 700° F at the start of the day and bake pies, pastries, breads, buns and cakes as the temperature gradually falls. On busy days they often fire the oven again in the late morning and use on average about a barrow load of firewood each baking day.

Kirsty and Carl have not (yet) been targetted by homosexuals looking for a fight.
They say:


Sometimes the old fashioned way of doing things really is still the best - and we believe this is true of bread. The solid even heat produced in a full brick wood-fired oven is the best environment for baking bread. We use unbleached flours and old-fashioned recipes to make a variety of crusty breads; many of our loaves we bake straight on the oven floor, which gives them an all round crust. 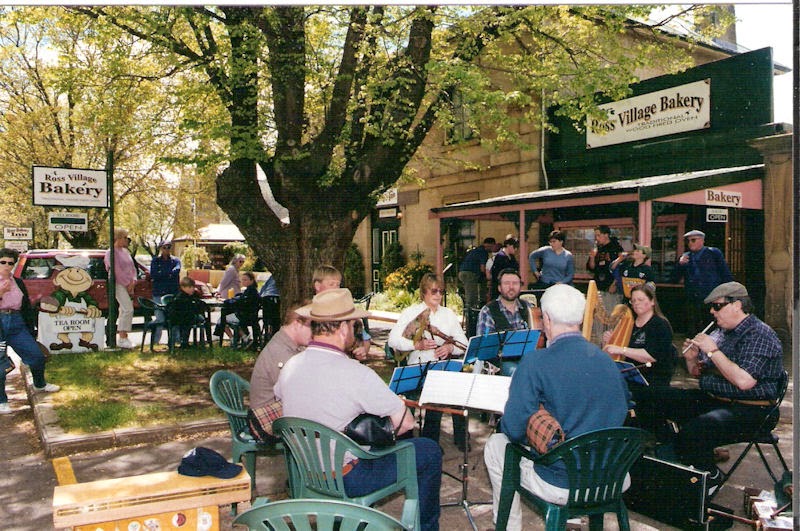 Take away or take a seat. We're open every day in summer for light meals and the best espresso coffee (and tea) on the Heritage Highway. On fine days we serve outdoors in our garden courtyard.

The University does not have a baking faculty. They have failed dismally to attract bakers, unlike the Ross Bakery which attracts customers all the way from Japan.

EVERY year thousands of Japanese tourist make the pilgrimage to an obscure bakery in a small rural town in the middle of Tasmania, captivated by its likeness to the setting of one of Japan’s most popular anime movies.


Fans are spellbound by the uncanny resemblance of The Ross Village Bakery to locations in the 1989 movie Kiki’s Delivery Service, a production of the premier Japanese anime creator Studio Ghibli and its founder Hayao Miyazaki — known as the western versions of Disney and Walt Disney.

“It’s like discovering Hobart is the setting forSnow White or Cinderella,” said University of Tasmania lecturer Dr Craig Norris, who has done a thesis paper on the phenomenon.

Dr Norris said is was fascinating because the story had been going for about 15 years.

“The startling thing is how its so persistent, so immersive and so successful.”

Some — known as cosplayers — even wear costumes to emulate their anime idols.

“Seeing the looks of joy on their faces when they walk in, some squeal and jump up and down,” Mr Crosby said.


“Some of them will come in their little costumes, with their bow in their hair and their little red shoes, and they want to stand in front of the oven and take a multitude of pictures. 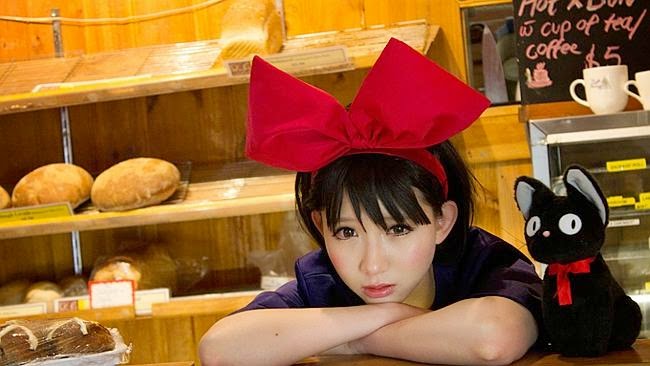 “They usually have something to eat and a coffee, usually a vanilla slice or a scallop pie.”


No one is sure where the folklore started but it has endured and is gaining momentum.


Visitors to Ross bakery are overwhelmingly young woman who identify with Kiki and her story of a witch travelling from an urban space to a small community to come of age. 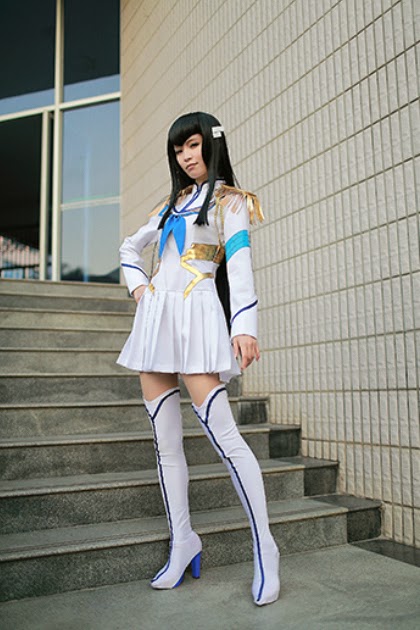 “You read in the guest log stories like a Japanese girl who has come to Australia, she just broke up with her boyfriend, her job hasn’t worked out but then she’s in the bakery and it all kind of makes sense now. She’s found a sanctuary and relief, much like the story of Kiki herself, overcoming challenges and adversity,” Dr Norris said.


An upstairs loft area in the bakery has been decorated to look like Kiki’s room from the movie after constant requests from tourists. 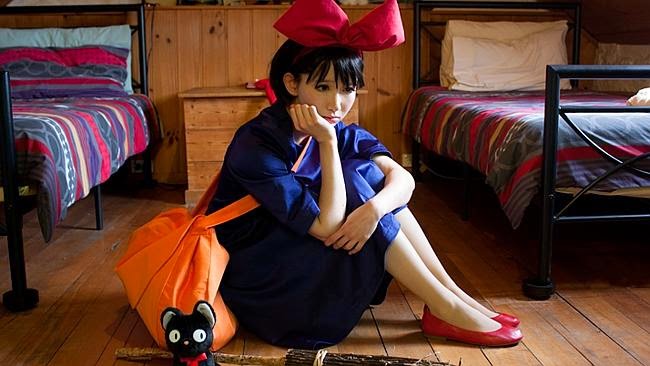 Dr Norris said the connection was not one created or enforced by the bakery owners, rather “it’s a grassroots, bottom-up phenomena developed by the fans”.


He said as well as travelling half way across the world, fans went to extraordinary measures to visit.

“There are stories of tourists who fly in to Launceston or Hobart and then get a taxi to Ross not having any idea how far out of the way it is.”

Dr Norris said since writing his research paper on Ross Bakery and Kiki’s Delivery Service he had been inundated with interest.“Since writing that article I’ve been invited to Japan to present on it,” he said.

“There’s a lot interest in this real oddity of having a cherished Japanese movie with a connection to Tasmania, an unlikely location.”

Personally, I think it is Kirsty and Carl who should get the invitation.

Meanwhile should either of them be in the vicinity of the Tavern there are drinks awaiting them. I shall make a point of dropping by their bakery next time I am in Ross.

Perhaps in time for next years Mensa BBQ by the river in Ross.

There might be quite a few strangely attired young folk about. Mind you, the locals could give them some competition.