The Strange Goings-on In the Oz Military

It would be a source of mirth were it not more a cause for deep concern. The Australian Military reputation is being trashed; by its own leaders.

The Oz military tradition is to trash the incompetence of Britain's WW1 Generals in a vain attempt to elevate their own. General Monash was possibly the greatest and most effective General of the time but it was years before he was able to gain recognition. The Oz military was too busy criticisng the British.


The alarm sounded and the Squadron's Leader rushed to the aircrew locker-room. Pulling his immersion and compression suit on was always easier for him than for the other pilots. It slid easily over his gold lame hot panties.  Hmmm. It felt good. "Follow me, boys and girls" he cried to the hairy-arsed men of his flight. "Let's get that mince-walk right this time or its a smacked bottom for someone again". There was a glint in his eye for the young Pilot Officer.


Meanwhile the Major was in the Tavern downing a pint and clutching his discharge papers.

Major Bernard Gaynor has been sacked from the Army for expressing his concern, as a Catholic and a Military Officer, for the Army insisting that men parade in uniform in the Gay Mardi Gras, despite clear orders that Uniforms must not be worn at a political rally.


And political is what Gays are about. 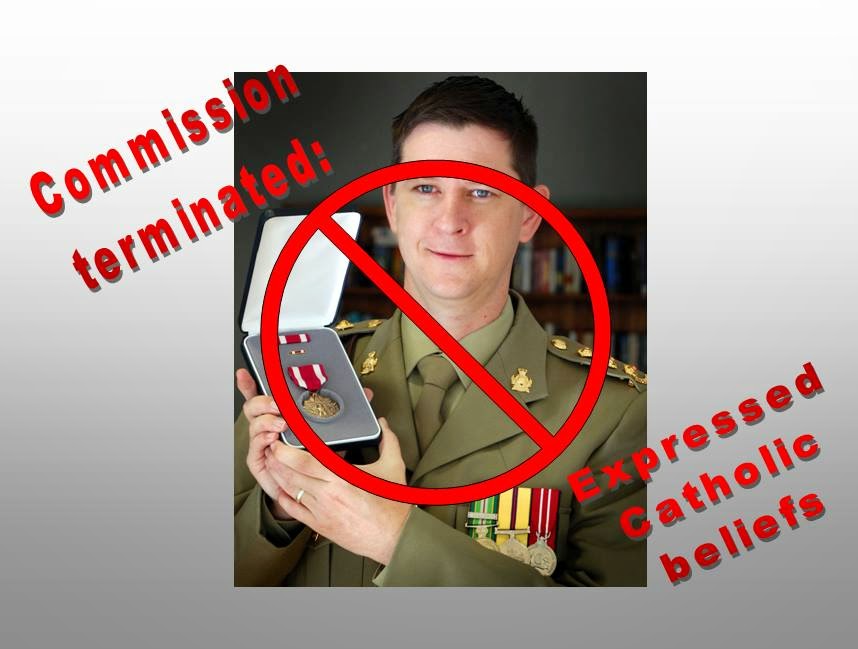 A man can serve his country, rise to some decent rank and yet be cashiered for defending the underpinnings of the nation's ethos. Christianity. The Rule of Law.

He can be counted amongst the leaders of Christianity, being a Catholic, a true member of the One, True, Holy and Apostolic Catholic Church, and yet when expressing that, be shown the door.

He can point out the Milirary's own rules and object when his fellow officers break them, and HE gets punished. His career terminated.

Bernard himself told us,


General David Hurley retired on 30 June, 2014. On his last day as Chief of the Defence Force, he signed a document terminating my commission. By Monday, I will no longer be a reserve officer in the Australian Army.

General Hurley’s letter confirmed that my commission is being terminated because he does not like the manner in which I express my Catholic beliefs.

His letter also acknowledges that he is aware that Defence’s own investigations into his decision to approve uniformed participation in the Sydney Gay and Lesbian Mardi Gras have found that it was a political event. And that it vilified Christianity.

But General Hurley went on to say that while my complaints have not been properly addressed, he is satisfied that the action taken in response to them has been adequate. The action taken to date has been to do absolutely nothing, except terminate my commission and continue marching down Oxford Street.

They can be ignored by those considered ‘more equal’ at will.


And who are these 'more equal'?

We only need to see what sort of modern military chap gets the pat on the back and a meda on his chest for courageously upholding the finest traditions. 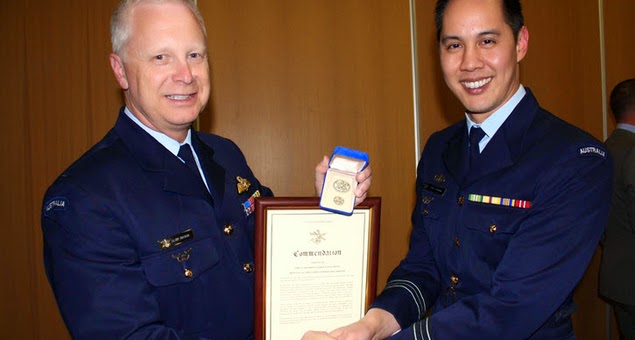 The most aptly ranked Vice Chief of the Defence Force, Air Marshall Mark Binskin  awards a Gold Commendation for services to the Gay and Lesbian and Transgendered sodomites, buggers, fashion-challenged and otherwise useless turds that you would not want to share a fox-hole with let alone a box of tissues or your best make-up eye liner or heaven forbid lend your best gold lame fighter-pilot panties.

“Squadron Leader Chong’s influence had a positive impact on Defence’s cultural reform agenda, but more specifically on Defence members themselves,” he said.

Can we expect the latest mob of Senators to step in? One, after all is a Libertarian. He says so.

This new Senator is reported as asking interviewees for the job he was offering, "Are you Gay"?

Senator Leyonhjelm’s excuse for doing this is that he wanted to hire a gay media advisor.

The best person available is no longer good enough.

God help us. The country already actively discriminates against men-in-general.

It is no longer worth defending.

We will have to fight for it.
Catholics are Born for Combat.
Posted by Amfortas at 1:42 PM