Having your Cake and Eating it.

Say for a moment that you asked for a pint and I refused. Would you sue me? This is a Tavern after all and pints are a 'usual' measure here.

What if you asked me to curse and I refused? Or you asked me to support something I strongly disagreed with?  Should my opinion count? Do I have to agree with everything my customers say or want?

And what if the Bouncer won't even let you in the door? He has a very handy way of making sure you find it on the way out if you spill some of your non-vital fluids on the carpet. Should you be encouraged to sue me, or even worse get some jumped up bureaucratic flunky to bring 'Powers' down on my head?

The answer for many is, as Dr Venkmann said in GhostBusters  "When a Being from another dimension asks you, 'are you a God', the answer is YESSSSS !'

Amongst those 'many' are homosexuals.

They consider themselves gods in their own imaginations, and not subject to the same rules as everyone else. They are  "Special'.  They are 'victims' of 'oppression'.

They know about oppression.

It gives them (so they think) the 'right' to oppress back.

Aaron and Melissa Klein refused to make the cake for 'religious reasons', and now face bankruptcy for discrimination.

They are not 'anti-gay', of course. The gays are anti-THEM .


An Oregon bakery which refused to bake a wedding cake for a lesbian couple is facing a fine for $150,000 - which could leave them bankrupt. 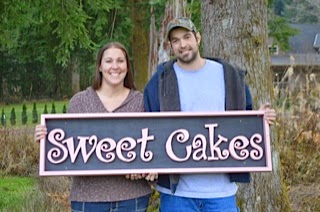 Aaron and Melissa Klein, owners of the Sweet Cakes by Melissa bakery, had refused to serve a lesbian bride-to-be in January 2013 because of their religious beliefs.

State investigators found this was a violation of the lesbian couples’ civil rights, as Oregon law bans discrimination against LGBTI people in businesses.

The Kleins, who have since closed their store and operate exclusively from home, told the Values Voter Summit in Washington D.C the fine they are facing would be enough to close their business for good.

http://www.gaystarnews.com/article/anti-gay-oregon-bakery-faces-150000-fine-refusing-service-lesbian-couple051014
The Kleins are just the tip of an iceberg of litigation, most of which is unseen by the general public who prefer to look the other way.

You can give the Kleins a bit of a cheer by going here:

http://www.sweetcakesweb.com/
Give them a buzz. Say hello. Be nice. Refer them to the Tavern for a nice meal and a drink on the house.
And it is not just a growing problem in America either. It is in Britain too.

Bed and Breakfast owners have been fined and closed down for refusing to open their homes to strange men who want to bugger one another under their roof.

Such B&B owners find that sort of behaviour disgusting.

But they are not allowed to be disgusted. Their sensitivities are obliterated by the homosexual jugganaut.

The homosexuals have our 'social engineers' by the balls, demanding and winning the most outrageous penalties on people who simply do not share their perverted lifestyle views and prefer more Traditional ways.

Ireland too has been damaged. A predominantly Catholic country with a long-standing and widespread respect for marriage and bakeries, the homosexuals see as a ripe place for stealing the fruitfulness of the traditionalists business enterprise. And they have their thugs behind them wielding big shilleaghlies.

The Equality Commission has confirmed that it is taking legal action against a Christian-run bakery in Northern Ireland for refusing to make a cake celebrating gay marriage.


Earlier this year, Ashers Baking Company, a family business based in Belfast, declined the request by a gay rights activist because it was "at odds" with the owners’ conservative beliefs, the BBC reports.


Last week, the equality watchdog sent a letter to the owners, warning them that they could face a sexual orientation discrimination case in court unless compensation was paid to the activist. It has now received notification from the owners' lawyers stating that their view remains unchanged and that their clients "have not acted unlawfully".


Christian bakeries that refuse to make pro-homosexual marriage cakes are persecuted throughout America. They get sued, they get fined, they get death threats, and they lose their businesses.

So we at Shoebat.com called some 13 prominent bakers who are either gay or pro-gay and requested that they make a pro-traditional marriage cake with the words “Gay marriage is wrong” placed on the cake.

Each one denied us service, and even used deviant insults and obscenities against us.

One baker even said that she would make me a cookie with a large phallus on it. We recorded all of this in a video that will stun the American people as to how militant and intolerant the homosexual agenda is:

If anyone who objects our request for the cake was hateful, this is exactly the type of thing the homosexual activists do to Christian bakeries when they use the state to coerce them to make a cake with an explicitly pro homosexual slogan on it.

The big lie of the homosexual agenda is this:

They say that they were only fighting for equality and tolerance.

Yet we always get accused here at Shoebat.com of lacking love since Christ, according to many teaches that we should love the homosexual, that we are “homophobes.”


And we ask: does God love the homosexual, yet he hates only the homophobe?


When it comes to such agendas it is not an issue of freedom, tolerance or equality. It’s always a war on which side wins. Period.

The hypocricy is obvious to all who care to see it. Unfortunately we have a lot of blind people in Hilary's Village.

By the way, in case someone asks: I am happy to serve fine pots of ale and Grace to homosexuals, lesbians, transgendered, transvestites, muslims, crikey even protestants and Irishmen. All are children of my Supplier. I treat them all equally, as He does. As long as they do not piss on the carpet.

We are all 'fallen' in one way or another. We are all sinners. But some run down that Road to Perdition, stealing from anyone and thuggishly mugging them, playing 'let's you and him fight', while others are struggling against the human tide trying to reach sainthood.

They is many though (with the humour exceptions) that do not treat Him or me or Bakers and B& B operators equally. They insist on sprinkling their noxious personal fluids everywhere and demanding preference. Or Else.