Shock ! Horror ! Men not Blamed for Something.

Men do not come to the Tavern to drown their sorrows. They come to find strengthening Grace in a cup of cheer. And today they had something to cheer about.

Most are quite used to carrying the blame of the world on their shoulders, especially for the lives of women, for whom no amount of 'empowerment' rhetoric is enough to shuck off that all-so-powerful victimhood.

Despite the invisibility of men - fathers - in the aisles of the small girl's clothing racks in Target  and K-Mart where mums go to buy sexy underpants and push-up bras for their seven year-olds,

along with the staring-at boobs-phenomenon, of course. The latter boobs are used as a weapon even amongst schoolgirls whose 'maturity' is measured in cup-size.

The usual feminist claim that 'girls 'mature' faster than boys is a constant refrain that can only be put down to hubris of a quite bizarre sort in an age when people seem to retain immaturity into their mid twenties.

Many women (and not a few men) never achieve even adulthood at all, let alone maturity. But some do become Politicians and Professors despite this.


But at last a political woman has stepped up to join Melinda Tankard (great name, that) Reist in pointing out that it ain't all men's fault. It is women with the 'body' issue, not men looking at them. 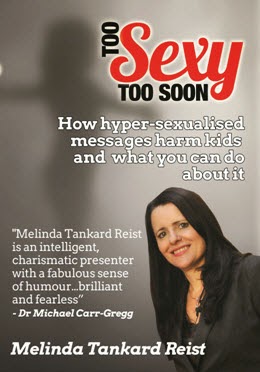 That Politico is Ms Swinson. Well, you didn't think it was Hilary, did you?

You cannot ‘have it all’ – British government tells women


Women should not believe it is possible to “have it all” combining a successful career, motherhood and beauty, a report published by the Coalition’s Minister for Women and Equalities insists.

http://www.telegraph.co.uk/women/11268578/You-cannot-have-it-all-Government-tells-women.html
Of course. Not that a Minister for Men would say such a thing because there IS NO such a Minister.


Many mothers are also actively damaging their daughters by “foisting” their own thwarted and “entirely unrealistic” ambitions on them, the study commissioned by the Liberal Democrat minister Jo Swinson claims.

It also argues that women unwittingly “transmit” potentially crippling anxieties about their appearance and weight to their own daughters from birth, stunting their career prospects in the process.


In many cases this is done through subtle signals about their bodies which the women “sensed” from their own mothers as babies, it claims.

So, how come the suffragettes never spoke of this 'generational' impost handed down by mothers? Too busy handing out white feathers one has to suppose.

One hundred years of having the vote and no female MP has raised the issue of women oppressing girls before !!


Parenting groups voiced dismay at the characterisation of young mothers as dangerously “pushy” and bitter.  But Ms Swinson, who wrote the foreword to the report, insisted it “shines a welcome light”on the pressures girls face.

By 'parenting groups' the writer really means, 'Other Women'.

It was enough to make many Taverners guffaw into their Tankards.

It cites a series of polls suggesting that around one in five girls deliberately avoid putting their hand up to speak in class because they are afraid of drawing attention to their appearance and that one in seven would even avoid school for the same reason.

Oh. But the Education Departments have been telling us for years that it was because of nasty boys hogging all the attention.  Those departments have been funneling Billions of taxpayer's money to teachers (most of whom are women) to teach them how to teach girls 'better'.

So, that was a bit of a waste then?


The report argues that body image and self-esteem are serious barriers to success for many would-be high achieving girls and estimates that Britain’s economy is being deprived of the contributions of an estimated about 200,000 more businesswomen.

Next there will have to be a concerted Government effort to 'help' women dress as 'proper' role models that do not screw up the chances of the young, up-and-crying lasses. In fact more like Ms Swinson.

It goes on to claim that mothers are subconsciously passing on their own body issues to their daughters in a seemingly endless “circle of appearance anxiety and body distress”.


And it adds: “Today there is a cultural rhetoric of girls and women ‘having it all’ and ‘going out there’. “These exhortations impinge on girls and on mothers in ways that create excitement and anxiety.  “They make it sound as though women can have it all at all times.  “This is entirely unrealistic and sets up expectations in complex ways within the mother daughter relationship and in women in general.


“It may include a mother’s inadvertent foisting on a daughter, ambitions that, for the mother, remains personally unfulfilled.


“Such ambitions may not sufficiently arm the next generation for the realities of the world and so when young women fail to meet the ambition they can feel shame and confusion, which in turn inhibits their economic activity.”

By the Lord Harry, we cannot have their economic activity inhibited, can we? That would never do.


Siobhan Freegard, co-founder of the parenting website Netmums said: “I honestly don’t recognise that – it is very strong language, it’s not helpful and it’s not realistic.

“All I can say is that I have not seen that - we all know the odd pushy parent, the tiger mother, but the vast majority seem relaxed and do not want to put pressure on their children.

She does not speak much about male parents as they are increasingly rare in our society.  Tiger fathers eat their young, we are all told.

“Of course you want your child to achieve their full potential but nobody wants to push their child beyond – that’s the beauty of being a parent, that you see your child blossom into this individual.”


She added: “If anything this is a generation too late and it is not borne out.

Now, I have absolutely no idea what she is saying here. But heck.... she has had her boobs inspected by a Prince so she gets to be quoted in newspapers.

“What I’m seeing is that it is today’s mums who were told they could 'have it all' have already realised that they have been fed a lie.

“Femminism was about how you could have it all and we are discovering that we are doing it all instead.”

I am not at all sure what that means either. I must pull another pint and ponder her no-doubt deep words.

Ms Swinson said: “This report shines a welcome light on what happens to girls’ aspirations and confidence when they are constantly distracted by how they appear to others.


“There is a lot of focus on the anxiety poor body image causes to young people, but much less attention on how its effects can spill out across all areas of life.

Yes, there would be a lot of focus on it when you have an entire bloody University Research Centre focussing.

Jobs for the girls in the playground, maybe? All showing how they are mature?

“This report forces us to consider how much creativity, energy and ambition would be unlocked if we could relieve girls from the unwavering, critical scrutiny of a society obsessed with a narrow and unrealistic ideal of beauty.”


“By ignoring this issue, we all become complicit in reinforcing these damaging messages.  “By actively challenging this overemphasis on appearance we can improve the lives of both women and men.”


Just imagine for a moment just how much creativity, energy and ambition would be unlocked if women could just take their attention off their boobs for a week.

We men are left feeing abandoned with all this blame flying around and none sticking to us.