The Anglophile world may well disappear completely in the next 25 years. It will have been 'changed', deliberately and from inside by people we would have recognised as 'like us', except they were anything but.

What we recognise as Anglophile is not simply language but a host of Institutions which had origins either in England or before England was a twinkle in an old Angle's eye; Principal amongst which is the Family.

The Nuclear Family was and is the basis of society. The sort of society that families would build. Mum & Dad and some kiddies, forged together in love and kinship and forging a world about them that was safe and self-reliant. It had a moral, even a Spiritual basis.

It achieved a great deal and made a Great Britain. Britain's families took it and its Institutions and inventiveness and self-reliance, and education and Law to the World and changed a huge part of it. It was copied by so many other countries, notably the USA and Canada and Australia. But others too.

But its very Spirituality, self-reliance, morality did not suit some people who wanted to rule instead of participate. Atheists, communists, socialists. And they insinuated themselves into that society and started on their destructive ways, taking down those Institutions one by one until they have finally reached the bed-rock. The family.

Just as Gramsci predicted would happen if the Left made their 'Long March through the Institutions', destroying education, law, religion and Family. Making way for the Totalitarians.

Almost too late, people are now waking up.

Amanda Platell dropped by with the bad news about Birmingham, the 'second city' of the UK with over 1 Million people. She was not a happy lady.


How terribly depressing, she said.

I pulled a pint but she needed something stronger.

a £100,000 statue of the ‘typical British family’ by the Turner prize-winning artist Gillian Wearing has just been unveiled outside Birmingham’s city library.

It shows two single mothers holding hands with their young sons, with one of the women heavily pregnant with her second child — but not a father in sight. 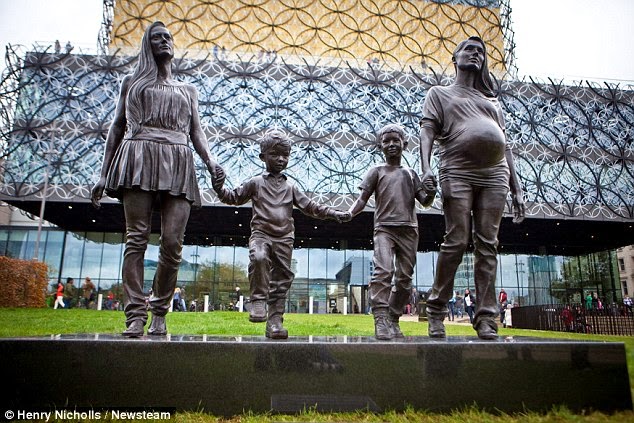 It was based on the real life sisters Roma and Emma Jones, who were picked by the Left-wing panel to represent the new face of the contemporary family in Britain’s second city.

Not at all like a similar idea in Italy.


What a sad betrayal of the traditional values that held great communities like Birmingham together.

What a triumph for the Left’s determination to undermine the nuclear family that has been the bedrock of civilised society for centuries.

And what a totem for extreme feminists who more and more argue that women don’t need men at all.

There are, of course, many single mothers who, whether through choice or circumstance, work incredibly hard to raise their children alone in demanding circumstances.

Indeed, Roma and Emma were themselves raised by their single mother in a Birmingham council house and were by all accounts well-rounded, polite young girls.

I’m sure they are equally loving mothers to their own children.

But to claim that they represent a typical family is crass, misleading and deeply cynical.

So why does the Left put single mums on a pedestal — literally?

It is perhaps because they can control them by keeping them dependent on the State for survival.

A single mum is far more likely to rely on benefits and is thus beholden to the State for her income and well-being.

At election time, few who are dependent on welfare are likely to vote for a Conservative party that has vowed to clamp down on benefits culture and champion the traditional family.

Not that the Conservatives will do any such thing, of course.  Where and when has a conservative party ever undone a leftist policy? Where are the conservatives with even a slight inclination to throw out the awful, wicked, leftist 'Family Law' and anti-Family Court?

And so the Left’s client-state survives and thrives, perpetuating a cycle of dependency through successive generations, almost invariably squashing aspiration, endeavour and self-reliance in its path.

Research consistently shows that children raised in a home without a father figure present are more likely to suffer poor health, do badly at school and fall into crime or drug abuse when they are teenagers.

I hardly think that’s something to be celebrated with a statue.


Britain used to be a totally Catholic country until the 16C, then 'changes' were brought in, rather more violently, by the 'progressives' of the day. They turned the nation into a watered -down Christianity with many sects and egos running amok.  Cohesion ebbed away.

Now the egos in charge are not at all Christian, even watered down. And they have altered the demographics in many more ways. Religion is one. The Christians in Birmingham are now less than 47%. Muslims, who were not sought as neighbours by the older folk of Birmingham now make 21%.

And do not even ask just how many Fathers are left. A critical mass of fathers have been demeaned, derided and dismissed from the family and now what do we have?

The Leftist Forgers have flooded the market with counterfeits.

If the new-style 'family' of single mums, soon to be joined by homosexual couples and already being caught-up by polygamous Muslims, along with a crass crowd of the atheists, the 'Transgendered' psychos, the 'wicca-nature-worshippers', the man-hating Feminists, the 'Greens', are to be the bed-rock of our society, just what sort of society will it be?

A rabble of rubble for a new Road to Perdition.

Or act. As these fathers have.


Members of the campaign group Fathers For Justice have chained themselves to a controversial statue in Birmingham this afternoon. 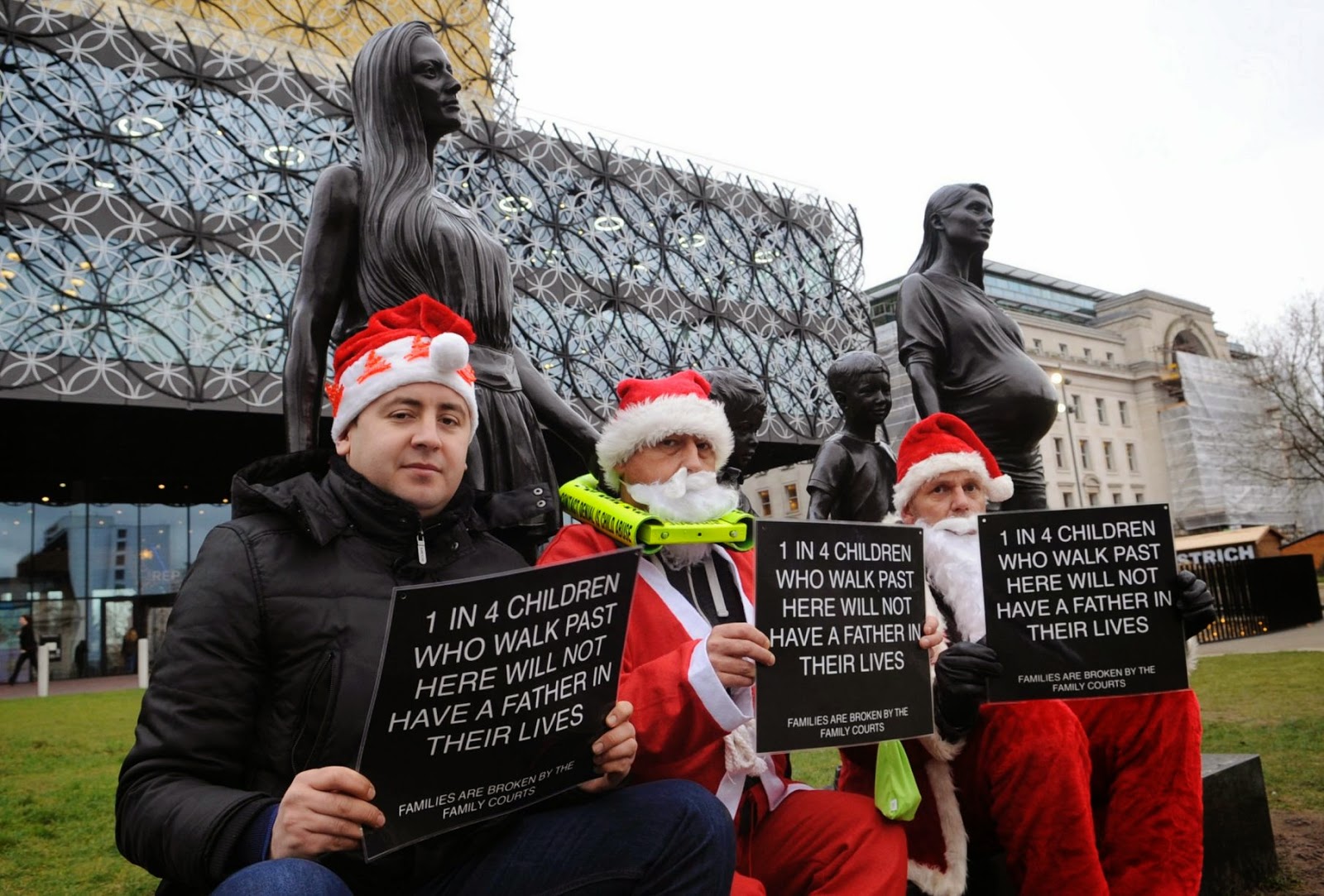 The group of five are currently chained to the ‘Real Birmingham Family’ statue in a protest about the lack of access they say they have been given to their children.

One of the demonstrators, James Dennis, 45, from Selly Oak, said he had not seen his three children in four years. 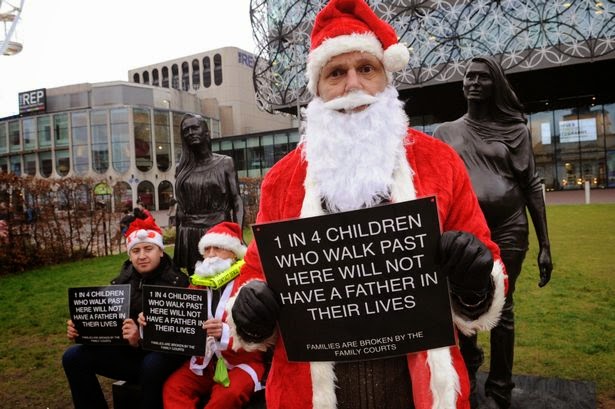 He said: “There are five of us. We are protesting because we are not seeing our kids over Christmas because of the gender bias in the courts.

“We have chosen that statue because it is wrong. It’s called the Real Birmingham Family but it’s biased against fathers because it hasn’t got fathers. The courts are kicking fathers out of children’s lives.

“While we’ve been chained here lots of people have come and spoken to us and said they are in the same position. The police are just watching us, we haven’t committed a crime.”

Real dads, not bronze ones. Real Fathers who have been 'dismissed' from their families.