They say that the Devil has all the best music. That might be debatable, even with the woeful decline in the 'entertainment' industry, but the Devil certainly has his claws in our Laws and Courts.

Laws are 'used' by individuals to bring vexatious litigations and by Lawyers to line their pockets. Judges play along, handing down 'punishments' that are downright vicious for trivial 'offences' while totally ignoring the enormity of other happenings.

Our prisons are full, often with nasty people it has to be acknowledged, but in amongst them are 'the good'; people who have simply tried to draw attention to horrors and cruelties and the results of 'modern' thinking on moral matters.

The immorality of the Intellectual Dishonesty of our 'Justice' system is simply not apparant to those blinded by shadow that is rapidly falling across the west. Who needs the demonic Islamists when we have our own spiritual blight with which to contend?

False accusation, invented abuse, hysterical and outrageous claims of victimhood, all get accepted with ease by our courts. Indeed, our 'Justice' system and legislators encourage and facilitate.

Take the awful example of what has happened to a pleasant old man in France. Near blind from age after a  constructive and benificent lifetime as a pediatrician, he has been found 'Guilty' of giving someone a present. A pair of bootees. 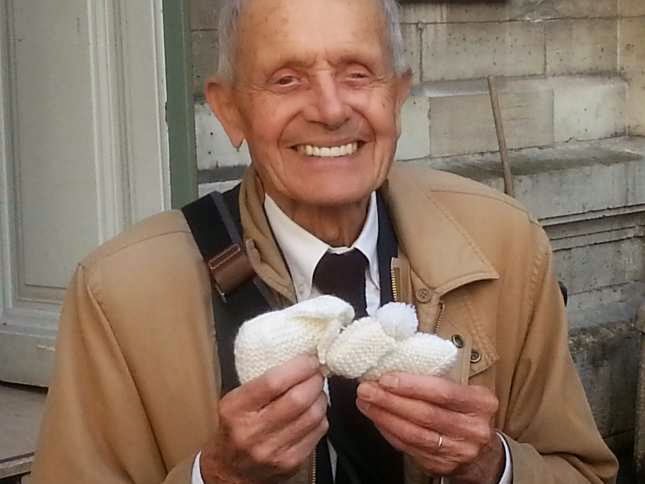 85-year-old French man fined over $6,000 for urging woman not to have abortion

85-year-old French pro-lifer Xavier Dor was fined 5,000 euro ($6,350) Monday by the Appeals Court of Paris for having exerted “moral and psychological pressure” to dissuade a woman from having an abortion.

Is this not what all civilised people give, lovingly, to their children?  We are all supposed to impress Morality on our children; teach Right from Wrong.

Ahhh, children. But today we HATE children in our society. Men too.  Even old men.

In 2012, the frail, almost blind, medical doctor, pediatrician, and researcher had given tiny knitted baby shoes to a woman who was approaching a Planned Parenthood center in central Paris.

The court also imposed a suspended fine of 5,000 euro, payable in case of a repeated offense, and awarded 750 euro damages to each of the three pro-abortion associations that had introduced the judiciary proceedings against Dor.

The Appeals Court was less severe than the criminal chamber of the Paris tribunal, whose judges went beyond the public prosecution’s demands, ordering a 10,000 euro fine in September last year as well as 2,000 euro damages for the young woman Dor met on the stairs leading to the Planned Parenthood center.


Dor is a veteran pro-lifer who, at the head of the association SOS Tout-petits, has led many protests and prayerful demonstrations near abortion facilities.

Not that he was charged about that, but with this one 'incident'.

He told LifeSiteNews he was “surprised” by the reduced sentence, given the present context in which abortion has become a fully-fledged right in France, and is 100 percent refunded by the state-run Social Security.

Nevertheless, Dor has decided to take the affair to the Court of cassation, which is in charge of verifying the correct interpretation of the law.

This case is actually one of the very first judgments regarding “moral and psychological pressure” with the intent of “hindering abortion.”

This offense is of relatively recent invention: it qualifies strictly non-violent actions that can take place in any location, not necessarily close to a hospital or clinic where abortions are performed.

This is very similar to Tasmanian Law, the oxymoronically named 'Safe at Home Act' which renders even a husband expressing an opinion - even delight - about his wife's pregnancy, an 'emotional abuser'.  Men MUST not express any opinion as it is a 'womyn's issue' and he would be applying 'emotional pressure' on her.

In this case, Dr. Dor twice entered the Planned Parenthood center. At this center, information can be obtained about contraception and abortion – including advice for women who are beyond legal term of abortion; no abortions are performed there.

On the first occasion, on June 25, 2012, he entered the offices with another person and was able to speak with the person in charge, explaining why he was against abortion. Next day he returned alone: this time, a staff meeting was under way and he was brusquely expelled from the premises.

It was while he was going down the common staircase of the building where Planned Parenthood has its offices on the first floor that he met a woman going up.

He stopped her and offered her a Miraculous Medal of the Virgin Mary and knitted baby shoes,

The woman told the story at the Planned Parenthood offices and together with that association, as well as several professional pro-abortion and contraception unions, sued Dor because of the “extreme violence” of his words.

As a Catholic and mother of three, she said, she had been “deeply shaken.”

A Catholic Mother of three? Really.

A Nancy Pelosi Catholic one could easily suppose.

Why be deeply shaken?


During the appeals hearing, the public prosecutor supported her claim for damages and demanded that the first judges’ harsh sentence be confirmed:

“He should realize the moral harm he’s been doing."

Moral HARM ? The sheer impertinence of such a remark is astounding.  It is more. A reversal of meaning. Typical cultural marxism.

He is objecting to Killing Babies.

"It’s about time for him to stop. As a pensioner, he should find other occupations and let these women settle their own difficult questions of conscience, with all the heavy suffering they entail and that should not be increased,” he said.


There was in fact no evidence offered that the woman was even pregnant let alone going there to obtain the murder of her baby.  She was simply a woman on the stairs. He offered her some bootees: she accepted.

The viciousness of the prosecutors is also astounding.

A man simply seeks to uphold the Gift of Life. A gift the Prosecutor, the Judge and even the bootee-accepting woman all enjoy and would resist giving up themselves.

Good people will protest. They will continue to stand against the evil of abortion. They HAVE to.

Did this woman sue on her own volition? Is this an up to date case like Roe vs Wade where a woman, Norma Corvey was conned into initiating a court case by feminist lawyers.

The planned Parenthood association and several pro-abortion organisations were deeply involved in this issue and seem to have deliberately conspired to 'assist' this woman sue.

Coercion is only by pro-Life people of course. Offering bootees is coercion.

Deeply shaking people right out of their minds, and their bootees.

On a personal note, I was again outside the abortuary in Hobart this afternoon, praying a Rosary along with my Catholic colleague Kathy.

I will continue to 'coerce' and dispense 'Moral Harm' in the form of prayers. What awful people we are.

The only ones who can possibly be harmed by Prayer are those in thrall to Evil.

(I won't be handing out bootees).

I hail Dr Dor as a HERO.