The current horror in the middle east has cast a pall over much of the past few weeks, turning hearts to stone. So much hatred. So much sheer evil. It is as though the Pit has been opened and demons are pouring forth.

And it brings the need for a calming Balm for the Soul. Taking sides is a matter of perspective for some and ideologies rise to the surface in the creamy as well as the scum.

So there was I down in the Crypt praying for light in the darkness when the answer, momentarily and for a short while at least, came in the form of Lydja, a lady quite close to me.

She showed me some items she wanted to display in the Tavern for a few days. "Just to bring a little beauty", she said.

I was astounded by what she had to show.

It is an astonishing world and many of the people who live - and have lived - in it create things of outstanding beauty and delight. Even seemingly impossible things.

I will show some now. A preview of the delights that my customers will gaze at over the next few days. I certainly will.

Bear in mind that the first of these were created by a lad of 23.

This statue was executed in flawless Carrera marble by the renowned Italian sculptor Giovanni Strazza (1818-1875) in Rome. Other examples of Strazza's work may be seen in the Vatican Museums and at the Archbishop's Palace in Milan. The St. John's Veiled Virgin was described by The Newfoundlander (4 December 1856) as the second such work by Strazza on the subject of a veiled woman.

During the mid-19th century, Italian nationalism was on the rise, and there was a resurgence in nationalism in the Italian arts and music. Strazza's Veiled Virgin is of a piece with this Risorgimento school of Italian nationalist art. The image of a veiled woman was a favourite subject of whole school of Strazza's fellow sculptors, with Pietro Rossi and Rafaello Monti the most important among them.

Often, the image of the veiled woman was intended to embody Italia, in the same manner in which Britannia symbolized England, Hibernia symbolized Ireland, and Lady Liberty symbolized the United States. 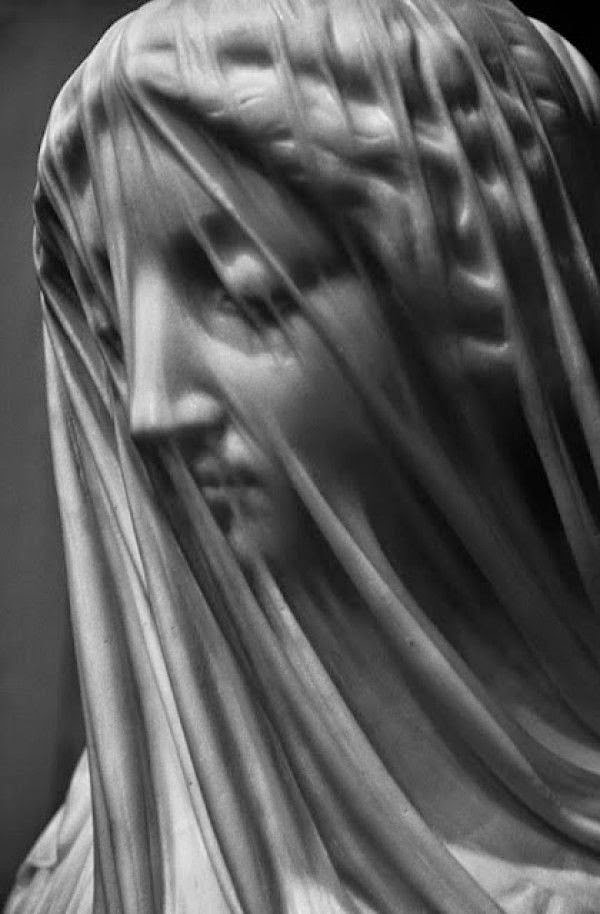 There are similar marble busts depicting veiled women in Canada, the United States, Ireland and England.

None, however, are as meticulously crafted as the Newfoundland Veiled Virgin by Strazza: the facial features and the braids in the hair are clearly visible through the stone veil.


On 4 December 1856 Bishop John Thomas Mullock recorded in his diary: “Received safely from Rome, a beautiful statue of the Blessed Virgin Mary in marble, by Strazza. The face is veiled, and the figure and features are all seen. It is a perfect gem of art.”

The Veiled Virgin remained at the Episcopal Palace adjacent to the Roman Catholic Cathedral in St. John's until 1862, when the bishop presented the bust to the Superior of Presentation Convent, Mother Mary Magdalene O'Shaughnessy. Bishop Mullock's sister, Sister Mary di Pazzi Mullock, was a professed member of that community, and later its Superior. 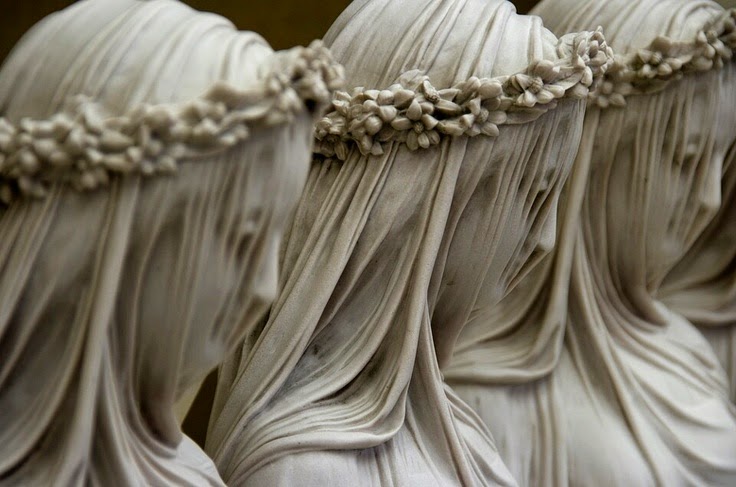 The church had some 'rules' about eroticism.

Take, for instance Bernini’s, The Rape of Proserpina

Bernini did a fantastic job showing us the agony Proserpina feels.

He carved marble tears on her face as she pushes against Pluto’s face creating creases in his skin. 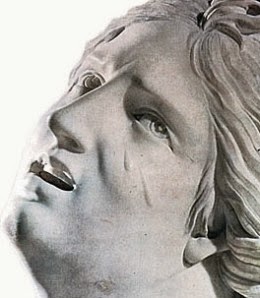 The struggle between Pluto and Proserpina, as Pluto grabs her causing indentations on her waist and thigh, is exquisitely detailed. 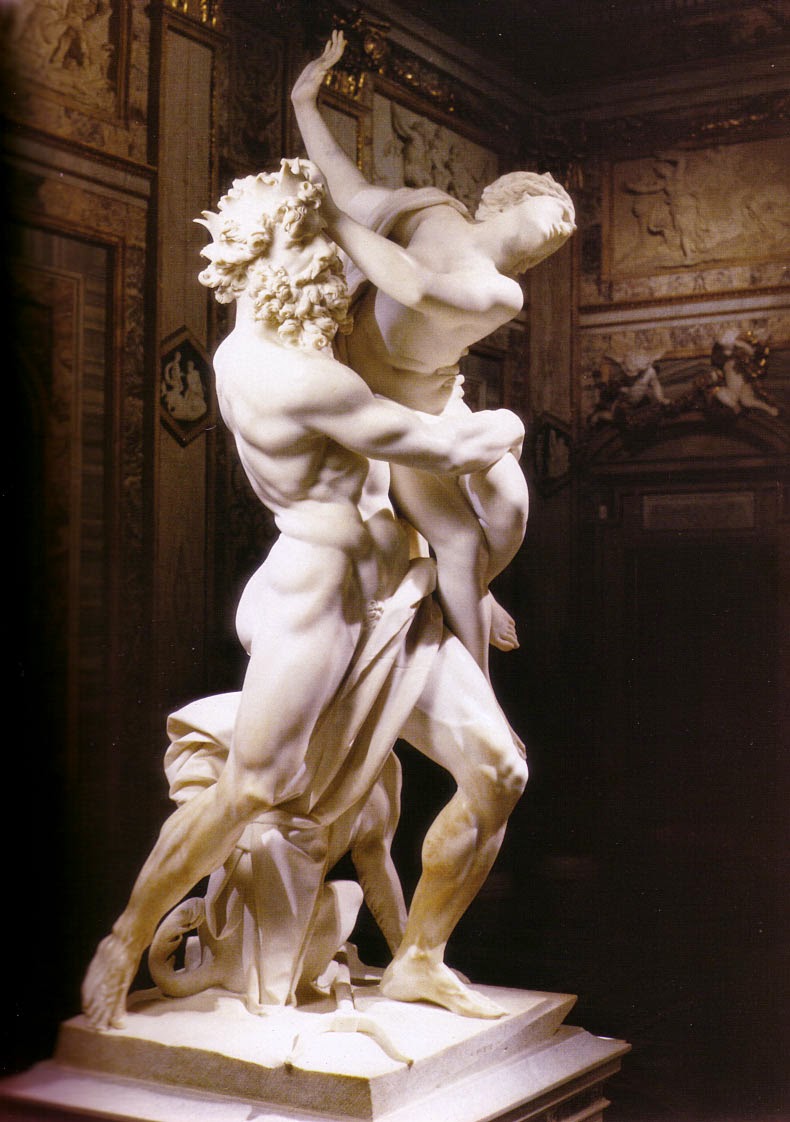 This sculpture was made for Cardinal Scipione Borghese.  As a Cardinal you are a part of the privileged status known as Nobles. People of the Nobility inherited this status and were often (but not always) wealthy and influential.  Borghese was the Cardinal-nephew to Pope Paul V.  As the cardinal- nephew to the Pope, Borghese had certain advantages.  He became Superintendent General of the Papal States making him a part of The Council of Trent.

The Council’s twenty-fifth decree had a great impact on the catholic art of this era.  It states: “…every superstition shall be removed

… all lasciviousness be avoided; in such wise that figures shall not be painted or adorned with a beauty exciting to lust… there be nothing seen that is disorderly, or that is unbecomingly or confusedly arranged, nothing that is profane, nothing indecorous, seeing that holiness becometh the house of God. And that these things may be the more faithfully observed, the holy Synod ordains, that no one be allowed to place, or cause to be placed, any unusual image, in any place, or church, howsoever exempted, except that image have been approved of by the bishop …”(Scipione). This decree condemned many Renaissance and Medieval art styles and iconography.

This gave Baroque artists the opportunity to expand their art, depicting drama and emotion, including rich color and detail.  After the establishment of the decrees, religious art was not in demand, but secular art by the middle class was.  This gave artist’s the ability to make a successful living, painting non religious portraits, landscapes, still lifes, and sculptures.

Today the art is not lost. While 'old' pieces are famous and usually held in secure museums or collections, 'new' but still magnificent sculptures can be found in China, of all places, where the new wealthy - as well as western wealthies - can order 'bespoke' pieces that are every bit as complex and beautiful. 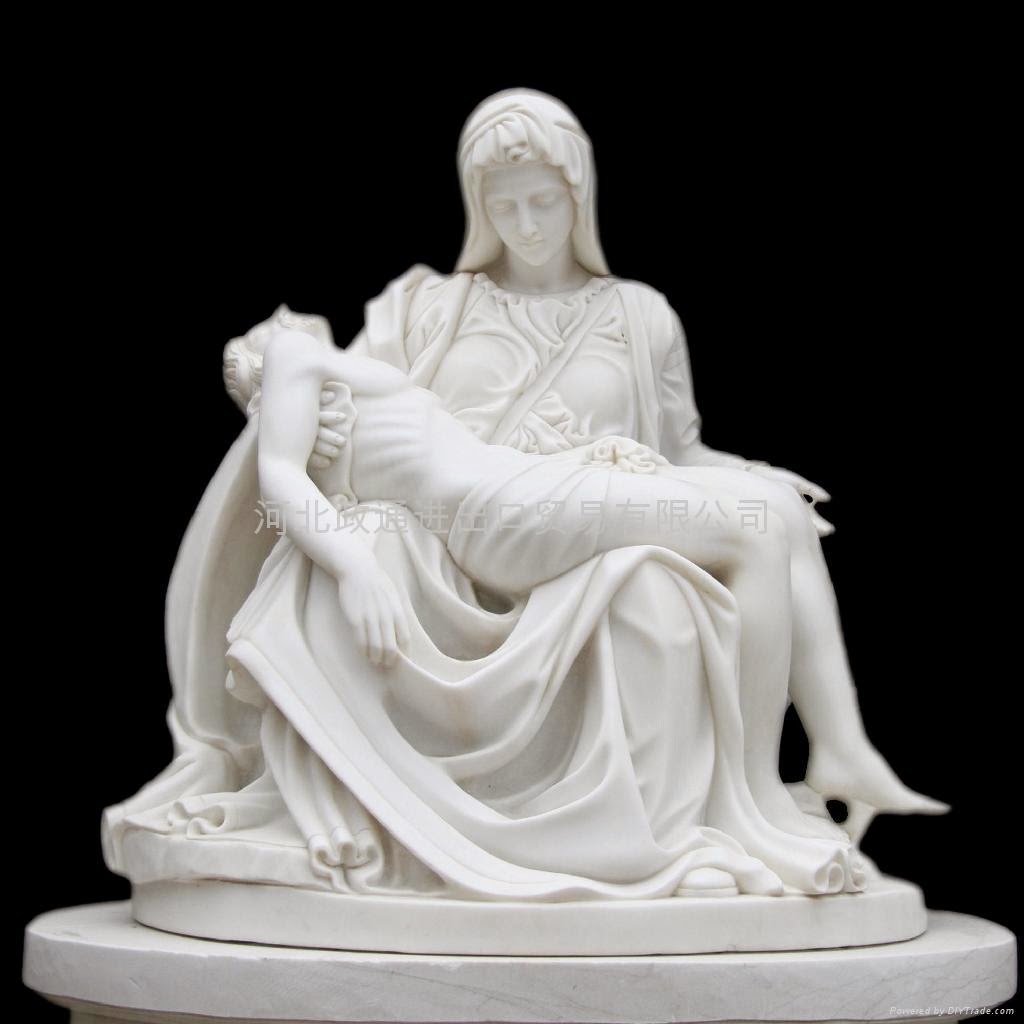 http://comepraytherosary.org/
Posted by Amfortas at 9:57 PM