I am a man with a Beard: nevertheless my neck needs shaving from time to time for which my Sword does extra duty. I shall not let a lady's blade do a job of a man's blade. I advise all chaps to think and act similarly. 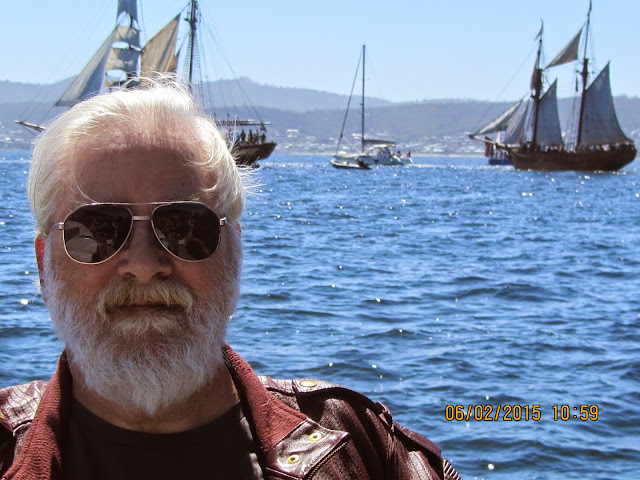 Put an appropriate hat and coat on and I could carry off the look of a ship's Master.  But that was not my calling.

Lady's blade?  Babbette, Lynnette, Jillette, Gillette. Girls' names. Gillette made its fortune after a salesman, seeking 'Salesman of the Year' and having captured his territory market of blokes, persuaded ladies too, to shave their armpits, and so vastly increased his sales.  But he did it by suggesting that 'other' women were 'ashamed' of body hair, (Boo, hiss), so they should be also. He won his title and the company dominated. The company was too smart by half back then: now they are just stupid.

The recent advert will be persuasive too. It has already persuaded men to throw their Gillette razors away and try others. And do you blame them? It grievously insulted men. Gillette has 'form' in the blame and shame business. It turned to a fetid feminist to develop their advert: one with a track record of demeaning and dismissing men. Now she will dispossess the company of a substantial proportion of its customers.

Well done 'saleswoman of the year'. 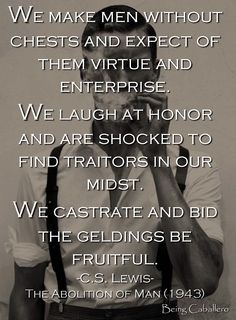 Just why any sane person or company would insult its male customers is not hard to figure. Our society has turned against itself and those that provide for it and protect it.

A decade ago, Gillette held 70 percent of the global market share for razors, and now it holds 54 percent. Those sales didn’t disappear; they went to those newer, savvier companies that don’t have 100 years of history making women feel bad about body hair.

Now it is suggesting men should feel ashamed about being men. (Hiss, Boo..t)

The Marketing Dept. has simply jumped on the anti-male bandwagon, thoughlessly and stupidly. Self-emasculation seems to be part and parcel of the civilisational suicide we see around us.

It does well to remind ourselves of the Good that men do and the Good Men all around us. Not perfect men; not all heroic; not all budding Saints. But good blokes in the main.  It is necessary to show it, not grossly over-emphasis the small proportion of bad men as that awful advert tried. It is especially important that the ladies who have heart, soul and Good nature give acknowledgement of Good men too.

As did the Lady of the Tavern yesterday.

I am by far no expert in masculinity.  I just know that I know it when I see it.  I see an attack on men all around me and that concerns me greatly.

But I want to take some time to shine a light on a few of the good masculine men I have come across lately.

I want to highlight that what masculine men offer the world is vital.  It is essential to our very survival, as a nation.

I can’t speak for all women, but I, for one, can see value in authentic masculinity. 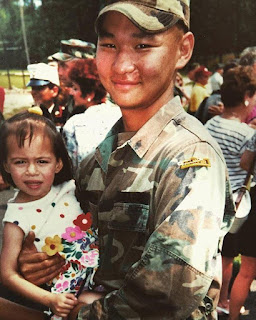 The man in this photo came from a country that was not free.  He came to the United States as a small child and became an Army Green Beret.

He sacrificed, he bled, he fought with his strength for the good of others, and he protects those he loves.

We need more like him in this country and elsewhere.  I see good in this man.

“Ranger School Class 7-94 (Back when there was still a Desert Phase) 19 yrs old. Graduation day with my little sister @anessaarnold After losing close to 30 lbs... When there is no more fat and your body eats away at muscle.. When you have to wear winter BDUs because all the other ripstop BDUs have torn away... You start to realize that mindset is the strength that will carry you on.

The little boy, who did as boys do: became a Man. 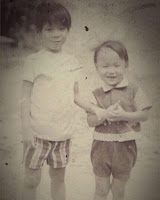 This understanding later allowed me to finish college (With Academic Honors) while taking on some of the hardest assignments in the military. No matter who you are or what you decide to do... Never stop... Never quit... And never let others decide your fate. #RLTW #ronintactics #life #godandcountry 🇺🇸 #journeyofathousandmiles” (https://www.instagram.com/p/BsdRjWcDZTq/)

A man who goes into the wild, looks the part after a short while. Warriors don't use Gillette.

Stephen Willeford is no stranger to adversity.  He is a Texas man, a good man, and ran into a church when a madman decided to kill 26 innocent people and injure over 20 more over a year ago in Sutherland Springs, Texas.

He rushed into a church while getting shot at himself to help save and protect the innocent who came to worship that day.

He is a good man.

This is what masculinity looks like and it is a good thing.

We, as a society.  Should cherish good men like this. 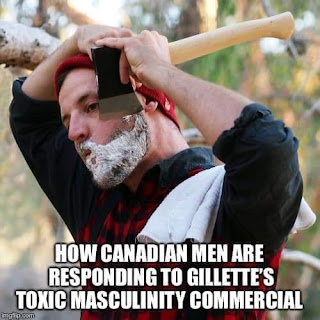 I say this and highlight these men to show that you are needed, you are valued and you are wanted by those of us that still have our sanity.  There are many more.  You know who you are.  And may God bless strong masculine men.  May you continue to be all that God has called and designed you to be.

“The rifle has no moral stature, since it has no will of its own.  Naturally, it may be used by evil men for evil purposes, but there are more good men than evil, and while the latter cannot be persuaded to the path of righteousness by propaganda, they can certainly be corrected by good men with rifles.” Jeff Cooper.

I have little doubt that the feminist woman who made the advert does not approve of rifles, churches or bothering to look out of her window to see good men. She is 'fixed' in her lefty feminism.

Some people just WILL not see beyond what they want to see.

The interview below has a fixed-minded woman who liked the advert and just would not see what men (and decent women) saw in it. The man being interviewed was quite clear and direct however. Let us not dwell on the interviewer chap who appears to stumble over his words - trying to be 'careful'?

You be careful too.

Don't do as Jillette has done and cut your own throat.

Have a drink instead.

Raise a class to my favourite Lady.