A Stain on Britain

One has to be either deaf or blind or both not to notice the decline of what was once Great Britain. Countries grow old, like individuals do, and few gain wisdom.  They become feeble. But it is often the case that individuals retain their dignity and courage along with the wisdom they have gained, right to the end, and depart in peace.

This is unlikely to be Britain's destiny.

But neither will it be like the warrior nation it used to be. A warrior could look forward - indeed he strode forward - to meet a glorious end battling the forces that would destroy him.


Not for Britain. It will whimper.

But it may serve a purpose in warning other Anglophile countries of their fate if they do not avoid the yellow rot in the British liver. It is not too late to take the appropriate medicine.

Mark dropped by to chat:

On page 196 of After America (personally autographed copies of which are exclusively available right here, he pleads with an eye to his free-speech pushback), I write as follows:


In 2009, Geert Wilders, the Dutch parliamentarian and soi-disant Islamophobe, flew into London and promptly got shipped back to the Netherlands as a threat to public order. After the British Government had reconsidered its stupidity, he was permitted to return and give his speech at the House of Lords – and, as foreigners often do, he quoted Winston Churchill, under the touchingly naive assumption that this would endear him to the natives.

Whereas, of course, to almost all members of Britain's current elite, quoting Churchill approvingly only confirms that you're an extremist lunatic.

I had the honor a couple of years back of visiting President Bush in the White House and seeing the bust of Sir Winston on display in the Oval Office. When Barack Obama moved in, he ordered it removed and returned to the British. Its present whereabouts are unclear.

But, given what Churchill had to say about Islam in his book on the Sudanese campaign, the bust was almost certainly arrested upon landing at Heathrow and deported as a threat to public order.

If you're wondering what it is Churchill actually said about Islam, well, I've quoted it from time to time - for example, a decade ago in a Telegraph column about the then Home Secretary's proposed protections for Islamic sensitivities, "Blunkett's Ban Will Fan The Flames". I began the piece with a reader's recollection of the first weeks of the Salman Rushdie fatwa:

A couple of years back, I mentioned the fatwa against Salman Rushdie and received a flurry of lively e-mails. It was Valentine's Day 1989, you'll recall, when the Ayatollah Khomeini issued his extraterritorial summary judgment on a British subject, and shortly thereafter large numbers of British Muslims were marching through English cities openly calling for Rushdie to be killed.

A reader in Bradford recalled asking a West Yorkshire officer on the street that day why the various "Muslim community leaders" weren't being arrested for incitement to murder. 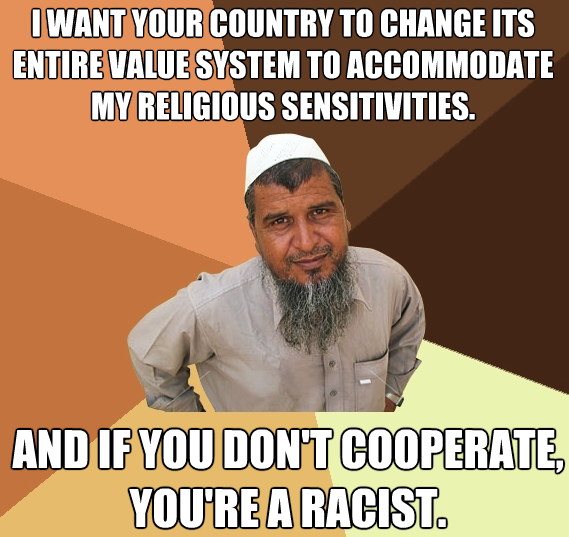 The officer said they'd been told to "play it cool". The calls for blood got more raucous. My correspondent asked his question again. The policeman told him to "F--- off, or I'll arrest you."


And so it has gone, ever more openly, across the ensuing quarter-century. Point out problematic aspects of Islam, and

the British state's response is

Her Majesty's Constabulary do not yet police their charges quite as strictly as the Saudi mutaween, but they're getting there:

The day after Drummer Lee Rigby was hacked to death in broad daylight on the streets of London, a march in support of the "Help for Heroes" military charity led to a five-hour standoff between marchers and police, ending with the arrest of Lee Cousins for "mocking the Islamic prayer ritual" by getting down on his hands and knees outside the pub.

When was the last time someone was fined 600 quid for mocking any bit of Christian ritual?

Which is how I came to be quoting Churchill in the Telegraph a decade ago:


That's another reason the British Government should not be in the business of helping coercive lobby groups further stifle debate. Islam raises political questions that Judaism or Buddhism doesn't - the suggestion, for example, that Muslim women should be exempt from the requirement to be photographed on national identity cards. Without Blunkett's law, there'll be the odd crusty type from the shires huffing on BBC phone-ins that if Muslim women think it's insulting to be made to remove their hejab for ID cards, they should bloody well have thought about that before moving to Britain.With Blunkett's law, we'll discuss such questions, if at all, between tightly imposed government constraints explicitly favouring one party to the dispute.

I know which one of those options any self-respecting liberal democracy ought to prefer.

In The River War (1899), Winston Churchill's account of the Sudanese campaign, there's a memorable passage which I reproduce here while I'm still able to:

'How dreadful are the curses which Mohammedanism lays on its votaries! Besides the fanatical frenzy, which is as dangerous in a man as hydrophobia in a dog, there is this fearful fatalistic apathy. Improvident habits, slovenly systems of agriculture, sluggish methods of commerce, and insecurity of property exist wherever the followers of the Prophet rule or live. A degraded sensualism deprives this life of its grace and refinement; the next of its dignity and sanctity. The fact that in Mohammedan law every woman must belong to some man as his absolute property - either as a child, a wife, or a concubine - must delay the final extinction of slavery until the faith of Islam has ceased to be a great power among men.

'Individual Moslems may show splendid qualities. Thousands become the brave and loyal soldiers of the Queen: all know how to die. But the influence of the religion paralyses the social development of those who follow it. No stronger retrograde force exists in the world. Far from being moribund, Mohammedanism is a militant and proselytising faith. It has already spread throughout Central Africa, raising fearless warriors at every step; and were it not that Christianity is sheltered in the strong arms of science - the science against which it had vainly struggled - the civilisation of modern Europe might fall, as fell the civilisation of ancient Rome.'

Is that grossly offensive to Muslims? Almost certainly.

Is it also a rather shrewd and pertinent analysis by one of Britain's most eminent leaders? I think so. If Blunkett bans the sentiments in that first sentence, the sentiments of the last will prove even more pertinent.

"A memorable passage which I reproduce here while I'm still able to."

Yesterday, in Hampshire, Paul Weston, the chairman of a newish political party called Liberty GB and a candidate in next month's European elections, was speaking on the steps of Winchester Guildhall and quoted that same Churchill passage.

A half-dozen police officers arrested him and took him away in a police van.


The Church of England was established by King Henry the Eighth to throw back the power of Rome. Well, that was his excuse. Really it was so he could roger a woman who was not yet his wife and dispense of his wife in a more furrin, dare I say, Muslim manner.


But the Independence of the
'British Christian Soul'
was at least part of the issue.

Christianity, despite its internal differences of opinion, maintained a solid core of 'Goodness', 'Love they neighbour', Forgiveness of Trespasses etc. The British Crown resisted the same edicts from catholic mouths but nevertheless stayed 'Defender of the Faith.

The Satanic forces are gathering just as the Socialist left has weakened every last vestige of a Christian Britain.

We may yet have to be rescued by outsiders who have greater courage.

Love the sinner: hate the sin.