GRAPHIC (as in 'orrible ) ILLUSTRATIONS.

If I get one more TV program featuring a politician claiming that Islam is the Religion of Peace, I shall get rid of the TVs in the Tavern. I would like to get rid of those politicians too.

Do you recall the political retort some years ago in America? ... "It's the Economy, Stupid".

It is high time politicians realized... "Its Islam, Stupid".

Islam is NOT a religion and it does NOT seek Peace.  It is a creed that is 'religion-like'. It is a faux religion. It was created by a False Prophet with one clear intention. It is Demonic in its origin and nature.

Politicians - and even some faux-religious folk - say the Islam worships the same God as Cristians and Jews. It does NOT. 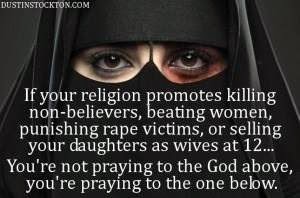 The politicians of course are gutless wonders and dare not say it.

To continually exclaim, as politicians do, that it is 'extremists' that are the problem and not the 'moderate' muslims, is to bring their intelligence into question. The politician's intelligence; and our intelligence.

Do they think we are as stupid as they are?

They compound their insults by calling anyone who points it out,

It is proof that politicians are totally stupid. They do not get it yet that we are
Politcophobic.

Now we are sending Oz aircrew to fight ISIS, that being just the latest manifestation of True Islam. Note that ISIS is totally surrounded by Muslim countries, from whence they arose, and who do not want to send their own armed forces.

Others, on TV and in print have said more. They agree:


Historian David Pryce-Jones says Western politicians fool themselves and us when they say Islam is a religion of peace:

A statement of the prophet often quoted with approval is that in religion there is no compulsion. Against that are Koranic verses, said to be 109 in number, that summon Muslims to war with non-believers, or jihad to use the term that has become current in most languages.

A typical verse reads, “And kill them wherever you find them, and turn them out from where they have turned you out. And al-fitnah (disbelief) is worse than killing … but if they desist, then lo! Allah is forgiving and merciful. And fight them until there is no more fitnah and worship is for Allah alone.”

No other Religion preaches the killing of people.  Catholics do not. Christians do not. Bhuddists do not. Jews do not. Heck, even Presbyterians do not.


Another verse with a similar Islamic State resonance is, “I will cast terror into the hearts of those who disbelieve. Therefore strike off their heads and strike off every fingertip of them.” 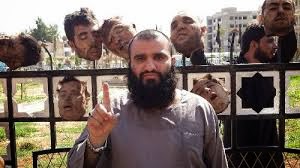 And finally a verse also much quoted, especially in the context of Boko Haram, the Nigerian Islamists: “Therefore, when ye meet the unbelievers (in fight), strike off their heads; at length; then when you have made wide slaughter among them, carefully tie up the remaining captives: thereafter (is the time for) either generosity or ransom. Until the war lays down its burden.” 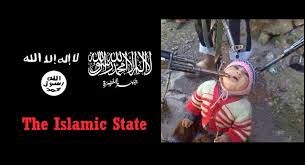 When did you last hear a Baptist demand that?  Not even the C of E Archbishop of Cantebury would think he could get away with saying that to the Tory Party.


Bin Laden, no less, asked the crucial question: “Does Islam, or does it not, force people by the power of the sword to submit to its authority corporeally if not spiritually?” and he immediately went on to give the answer:

Concurring, the Grand Mufti of Saudi Arabia, another venerable warmonger, defends the divine right of Muslims to resort to violence. According to him, the spread of Islam went through several phases until “God then authorised the faithful to defend themselves and to fight against those fighting them, which amounts to a right legitimised by God”.

Influential Muslim Brotherhood Sheik Yusuf Qaradawi is among the clerics who vigorously support the death sentence for apostasy.

Any leniency in that respect, he warns, would mean the end of Islam.

Salman Rushdie was to discover that the accusation of blasphemy was enough to get him a death sentence. At the latest count Iran this year has executed 174 people, some of them charged with being an “enemy of God”.

What does Islam license men to do?

This appeal of such a message - the war against enemies of Islam - seems to be stronger than loyalty to any nation, which is why the huge armies of Middle Eastern nations seem powerless to defeat the small Islamic State forces.

Said the Former US Ambassador to Iraq James F Jeffrey:

Given its relatively small forces, the Islamic State could theoretically be defeated by the states of the region, whose armies number more than two million personnel, but there are a few factors that work against the idea.

First, these nations are not united, have different political approaches and require leadership that can come only from the West, especially the US. This leadership, however, comes with baggage, often reducing its effectiveness.

Second, with a few exceptions (Turkey, Israel, Iran, perhaps Egypt), none of the states in the region commands the loyalties of, and has established deep roots within, their own populations, in the same way nation-states elsewhere, in the Pacific and Europe for example, have evolved. ­National states in the Middle East are generally weak and insecure, and many among their populations are enticed by transcendental pan-­regional movements. These once included nationalist Arabic movements, but today they are all Islamic, from the Iranian-propagated form of Shia political Islam, Vilayet-i-Fiqar, with its Lebanese Hezbollah allies, to the Muslim Brotherhood and subsidiary groups such as Hamas and finally al-Qa’ida and its offshoots such as the Islamic State.

While the region’s Arab states see these groups as blood enemies, they understand their appeal to their own populations. This curbs their enthusiasm for bold public action against the Islamic State.

I can agree with much of this assessment. I can understand that western minds find revulsion on their TV screens nightly and want to stop it.

I do NOT agree that 'leadership' can only 'come from the west, particularly the US'. The US, under its current Muslim-lite President, could not lead a pack of boy scouts into a pub. Not even this one.

But, frankly, it is a Muslim problem. Muslim countries can prove their civilised rights by fighting their own atrocities born from and encouraged and DEMANDED by THEIR 'Religion'.

But more. The Christian Bible has shown the inevitability of this fight.  It shows the False Prophets will come. They have.

It predicts Good will have to fight Evil.

But it also predicts totality.

The Politicians like to tell us that there are 'extremists' and 'moderates'. They tell us that 'Only' 15% are extremists. There are 1.6 Billion Muslims and if 'only' 15% are murdering psychopaths then we 'only' have


Pray for Peace, but not the Peace of Islam.

Thy Will Be Done.

Forgive them.
They know not what they do.

Finding forgiveness for those involved in such wickedness is the Big Test for a Christian Soul. It is rarely possible to do on one's own. We need ....